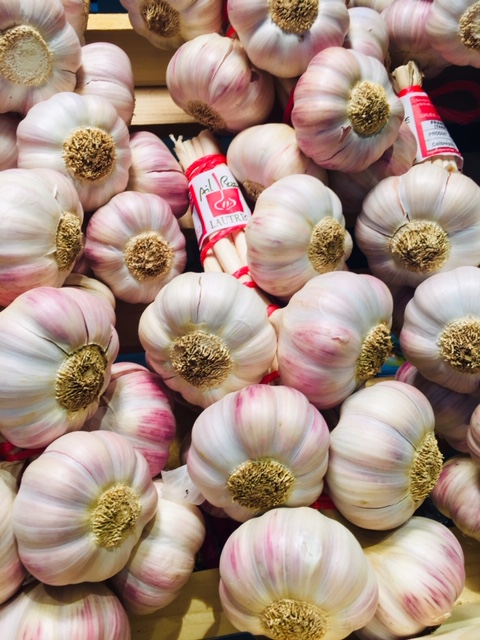 Last Friday morning I boarded the Eurostar in London and  2 hours, 15 minutes later, arrived at Gare du Nord in Paris. I will be here five weeks.  This is a take 3-deep-breaths birthday year for me (I have until October to adjust.) and I am determined to make each day a doozie.

When I was in Paris last winter, I lived in the Marais on the Right Bank. It feels medieval, has more pre-revolutionary buildings and streets intact than anywhere in Paris and is in the heart of the Jewish quarters. This year, instead of returning to what I knew, I chose to live on the Rive Gauche (Left Bank) located south of the Seine in the Saint-Germain des Prés neighborhood.

Much of this week has been bumbling my way here and there, soliciting tips and pulling up Google Maps. Besides  locating Monoprix, Carrefore and la poste, I’ve also nailed Carton ( best local croissants ), Freddy’s (wine bar, small shareable plates) and the famous Poilâne’s on Cherche-Midi (they still bake bread in their basement oven and sell it in their upstairs boulangerie). On Sunday I walked to Marché Raspail, an organic 150-stall open market which is the largest in France and then stopped by Henri Le Roux’s, the renown chocolatier/caramelier whose shop is below my flat.

I visited the remarkable Musée de Cluny, the National Museum of the Middle Ages,  on the last day of its Magical Unicorn exhibition. This 15th Century Hôtel de Cluny mansion, is surrounded by a sprawling Roman bathhouse dating from the Gallo-Roman period. Its famous collection includes the “Lady and the Unicorn” tapestries, c.1500, thus the retrospective on the mystical horned-critter. Yesterday I paid respects to  Notre Dame but the scaffolding is distractive. Then again, this formidable old lady has stood tall since 1163 when construction began and desperately needs this ongoing restoration work.

For some fifty years this ten-day Salon has been the annual meeting & event site for the key players of the agricultural world. It is my good fortune to be in Paris now and, even better, to attend it with my friends, cookbook author Dorie Greenspan and her husband, Michael, as well as Jane Bertch, who founded La Cuisine Paris, a cooking school/food tour company. I’ve booked her 5-star food tours in the past and will be taking my first LCP cooking class next week (macarons). What better group to tag with than these three foodies.

How to explain this gigantic event…put the Iowa State Fair together with the Aspen Food & Wine Festival on steroids and take that times ten. Or, better yet, just have a look at my photos. Please know we started sampling oysters at 11am in the morning and worked our way through cheeses, saucisson (dry sausages), candy, Tarte Flambée, an Alsatian pizza with cheese, bacon, and onions, foie gras sandwiches, Tourteau fromagé (a cheesecake baked at 700 degrees) and a custard flan with French prunes, all washed down with wines and beer. Seriously?

Marché Raspail, Boulevard Raspail, between the streets of Cherche Midi and Rennes, 6th

Our recipe choice this week, David Lebovitz’s LEEKS with MUSTARD-BACON VINAIGRETTE, is too tasty to miss. Please try it. Since my kitchen here in Paris is adequate, I get to cook every week. Next week is POTATO TOURTE from Dorie Greenspan’s Everyday Dorie: The Way I Cook.

If any of you try David’s recipe, tell me if you liked it, will make it again and send me photos to use in my blog. Any problems? Let me know also.

LEEKS with MUSTARD-BACON VINAIGRETTE by David Lebovitz, My Paris Kitchen

5  large or 10 small leeks, cleaned but not sliced down the middle

1.Cook the bacon over medium heat in a skillet until nearly crisp. Transfer the bacon to a paper towel to drain. When cool, chop the bacon into pieces about the size of tiny peas.

2. Whisk together the vinegar, mustard, and salt. Whisk in the oils, 1 tablespoon at a time (the sauce may emulsify, which is fine), then stir in 1 tablespoon of the parsley and two-thirds of the bacon. Set aside.

3. To prepare the leeks, fill a large pot fitted with a steamer with a couple of inches of water. Bring it to a boil over high heat and add the leeks. Cook the leeks until tender meaning when you poke them with a sharp paring knife, it should meet no resistance at the root ends. (Smaller leeks will take about 15 minutes, and larger ones will take about 30 minutes.)

4. Remove the leeks and let drain and cool on a plate lined with paper towels. Cut the leeks and half them crosswise and arrange on a serving platter alternating them head to tail.

5. Peel and dice the hard-cooked egg(s) and scatter them over the leeks.

6. Pour the vinaigrette over the leeks/egg(s). Use a fork or move the platter so that the dressing coats the leeks as thoroughly possible. Scatter the remaining bacon pieces and parsley on the top.

COOKtheBOOKFRIDAYS is an international group of food bloggers cooking it’s way through David Lebovitz’s My Paris Kitchen cookbook (almost completed) and Dorie Greenspan’s Everyday Dorie: The Way I Cook (our journey is just beginning). If you wish to join us every week or occasionally go to https://cookthebookfridays.wordpress.com/ Or, contact me.