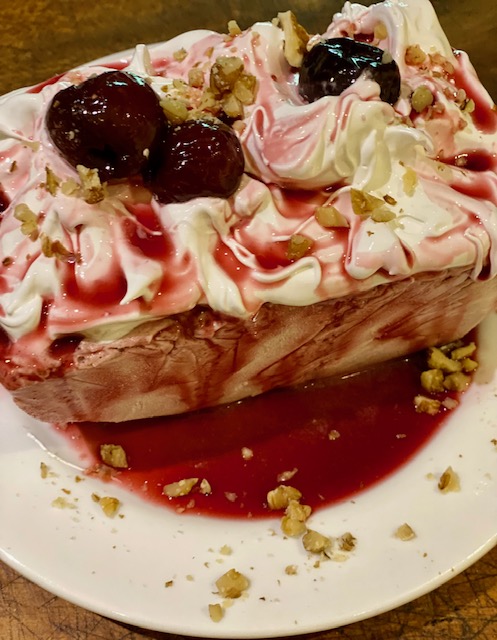 In the late Eighties my daughter Melissa, a junior at St. Olaf College in Minnesota, spent her junior semester abroad in Sumatra, Indonesia. Michael and I were less than pleased about her destination choice but to no avail. She was headstrong, independent and hell-bent to have an adventure on the other side of the world. ( She must have inherited those character traits from her father.) So off she went.

It was a rocky few months. This was the college’s first experience with sending a woman to Sumatra, communication where she was situated was sketchy and safety was an issue. Let’s just say the President of St. Olaf and I had conversations.

Fast forward to her return. We headed to the airport the day of her arrival home to Des Moines where we lived at the time. We were beyond excited. The plane arrived. No Missy. I know that because when she didn’t deplane, I charged onto the plane and looked under several seats. (As I mentioned, these were different times.)

Michael kept his cool. I did not. The airline said she had been routed to Denver. My brother, who lived in Denver, called when he got to the airport, had her in hand and would stay with her until she boarded a flight for Des Moines. Although my recollections of that incident are hazy (or, blocked), she eventually made her way home.

That was the week I found my first gray hair.

So it’s not surprising that last week, after 17-months, when she was finally coming to Aspen, I was at the tiny Grand Junction airport 4 hours before her arrival. We’d had more than 20 different mudslides in our area last week causing ongoing road closures. I was prepared for whatever Mother Nature threw my way. Melissa arrived. We drove back to this beautiful Valley where she once had lived and to my mind, our time together was perfect.

The moral of this story may be Always a Mother, Life is Wobbly, Be Brave and Mind the Gap.

To celebrate a milestone accomplished, I’ve got a little baking adventure for you. Or, if that grinds your gears, sit back and just enjoy reading about mine. Semifreddo is a classic Italian staple that lands midway between mousse and ice cream. It has the consistency of a frozen mousse and the flavor of ice cream. If you’re pronunciation-challenged like me, it’s pronounced SEH – ME – FRAY – DOUGH which means half-frozen in Italian.

Semifreddo is basically heavy cream, sugar and eggs. In the frozen dessert category it’s been called ‘the richest, most luscious and most decadent.’ You don’t need an ice-cream maker to create it. Use any fruit or chocolate you have on hand. Add nuts, if you wish. The last semifreddo I made was peach. In my opinion, adding the meringue topping is an extra detour you don’t need to travel. I usually just puree extra fruit and pour it with added chunks on top. For me, the meringue adds an extra sweetness not needed.