I joined. I follow and am followed. I pin and am re-pinned. I create my boards and am impressed, inspired and invigorated by the boards of others. Everything about this spunky new social-networking tool hits my pins…..uh, make that, buttons. It rains feel-good, drip by drip by drip.

Petula Dvorak, a writer for the Washington Post, recently called Pinterest  “digital crack for women.” If that’s the case, then I’m addicted. 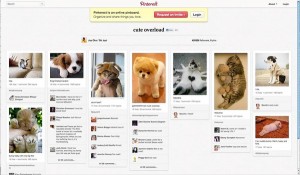 Pinterest – a visual bookmarking site that lets you “pin” and share images of things you deem worthy of sharing.

For those of you unfamiliar with this site, let me explain. First, Pinterest, a virtual pin board of pictures, is the fastest-growing Web site in history. Last month, according to Forbes, about 11 million unique visitors navigated through. It is on-line scrap booking at its simplest. You’re the pinner, filling memory boards with images of your interests. If others like your pinned images, they can re-pin them to their boards. I have created 9 boards. I follow a gal who has 38, another, 52.

As New York Times writer David Pogue recently wrote, “The ability to round things up into tidy collections is powerful and visual.”

I first learned of Pinterest last year when Lynn Burgoyne, a professional artist and educator, mentioned she was dropping Facebook and moving to Pinterest as her social networking outlet. Since she is such an innately imaginative woman, a powerhouse of creativity, I was interested. Lynn sent me an invitation (no longer required), and I joined.

I recently asked Lynn what distinguishes this new kid from other on-line social networks?

“I was attracted to Pinterest because I needed some creative stimulation,”  Lynn replied. “Facebook allowed me to connect with people I know and with long lost school buddies. It was wonderful but after a while I was totally bored. I felt that I was wasting precious time and wasn’t being productive throughout the course of the day. A friend introduced me to Pinterest and a whole new creative world opened up to me!  It’s a smorgasbord full of visually stimulating ideas!”

To my thinking, it’s worth a visit to this site just to read a few of the hundreds of labels given these imagery boards. For example:  Besotted with This; Sweet on the Standards; I Carry a Torch; Gris Galore; Felt Up; Their Dish & My Dish; Green Eggs & Pam; For Crying Out Loud; Women Roaring; Whacked My Funny Bone; Noah’s Intention; Ways to Save Moo-lah; Nuts about Nutella; and R U Worth Your Salt?

Lynn, who has created 97 boards, has 627 followers and has been re-pinned 12,076 times, making her one of the more successful pin-pals. “I’ve been on Pinterest for over a year” she says. “Since then I’ve been inspired to paint three paintings,  produce a beautiful garden with a bumper crop of goodness. My culinary art skills have improved. I’ve read books that I might not ever have known about and saved money doing DIY projects. I’ve come up with new art project ideas for my students and become more educated in world culture, travel, art, music…the list goes on!”

As for me? I joined Pinterest last Fall. Since I’ve never bonded successfully with any social-networking sites nor even played interactive computer games, I’m surprised (and, pleased) with this playful, responsive and, yes, time-consuming, platform. It’s relatively easy to gear up and start pinning,  although I  admit to being helped by computer-geeks-the younger. 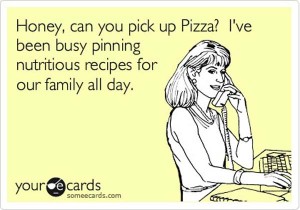 It’s important to note, however,  that Pinterest primarily attracts females (80%) but is not geared to aging Baby Boomers like me. To my thinking, that’s the narcotic. I feed off the frenzy of the enormous creativity produced by countless younger generations of women. Their imaginative ideas help me visualize, more fully, their thinking process and the rhythm of their vibrations. It’s fun, really, really, fun, to look and learn from them.

For Lynn, who lives in an isolated area of California’s Sierra-Nevada Mountains, it’s another critical lifeline to a bigger world. “I have interacted with several “pinners”,” she says. “The first to come to mind is Sam.  We share similar tastes in art as well as other interests, and I’ve learned a lot from his pins as he is a world traveler  and collector of art in every form!”

Like anything that is the newest, latest and greatest, the buzz has landed Pinterest squarely in the media spotlight. According to the Wall Street Journal, it has also grabbed the attention of Silicon Valley angel investors who have, to date, pinned $37.5 million onto the Pinterest boards. Although the closely held company, created by Ben Silbermann of Des Moines, Iowa, wouldn’t disclose financial figures, it is currently valued at around $200 million, according to a person familiar with the matter. 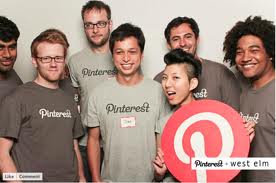 It seems to me that New York Times writer David Pogue puts this phenomenon in proper perspective. “It might seem hard to believe,” he writes, “but yes, even in the Facebook-Twitter-Tumblr-LinkedIn era, there’s still room for yet another successful, popular social media site. At least there’s room online. Whether there’s enough room in your busy life is a different question!” 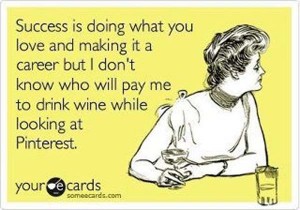 « Roasted Salmon & Lentils, French Fridays with Dorie
WHO SPEAKS FOR THE TREES WITH NO TONGUES? SNAP OUT OF IT »