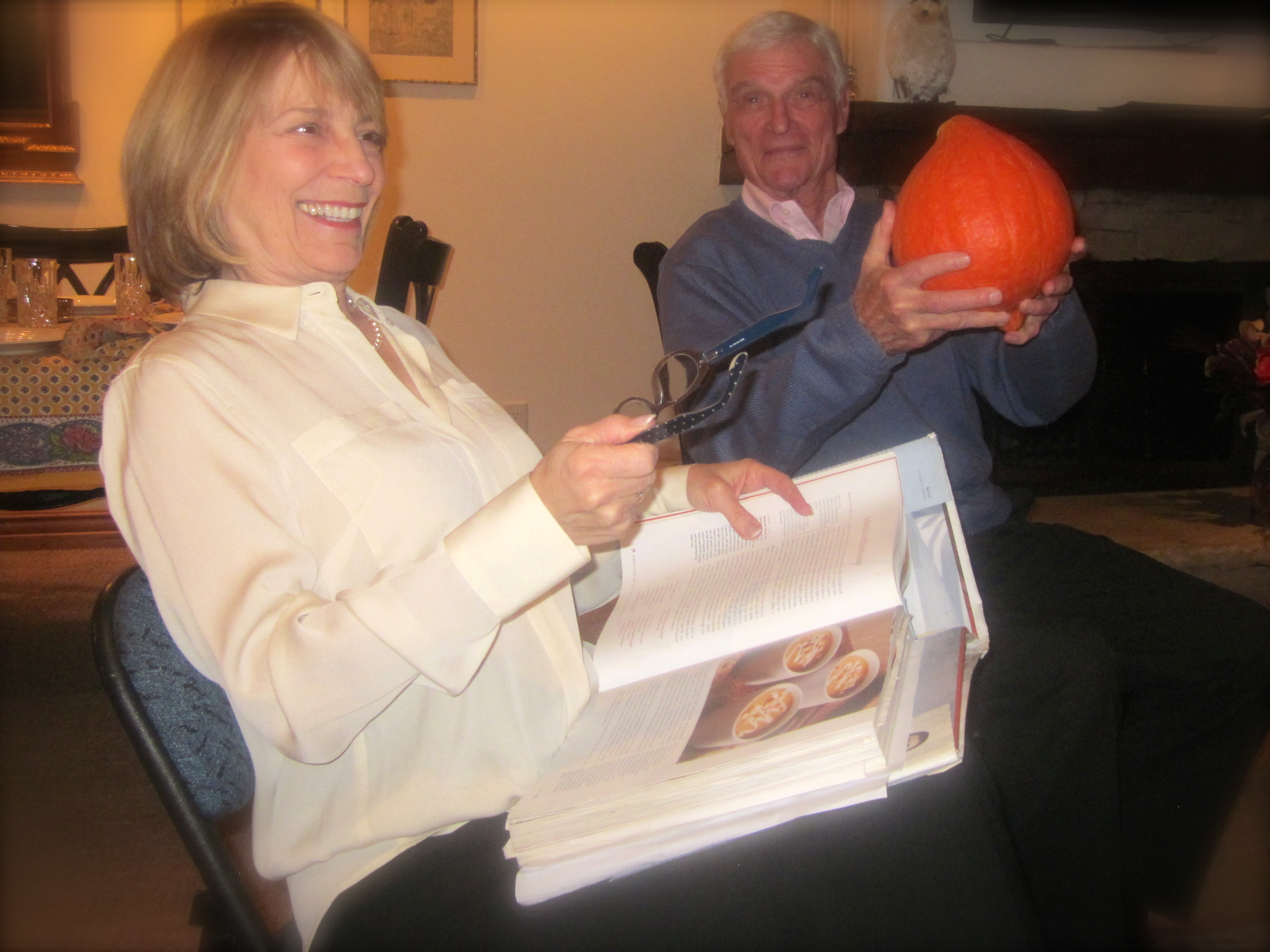 Judy is reading about Red Kuri Soup from Dorie’s Around my French Table while Philip holds up the star of the show. Note that this week the spine separated itself from my well-worn and beloved cookbook.

Once upon a time, in the snow-peaked Colorado High County, lived a brilliantly colored, teardrop-shaped squash named Red Kuri. She tipped the scales at three pounds, a bit hippy, you might say. It’s all about her unique essence of squash infused with chestnuts that suggests her possibilities. Her fatal flaw? If she is baked, braised, or steamed, her shell softens, is edible and, when pureed, completely dissolves. Think Frosty the Snowman. 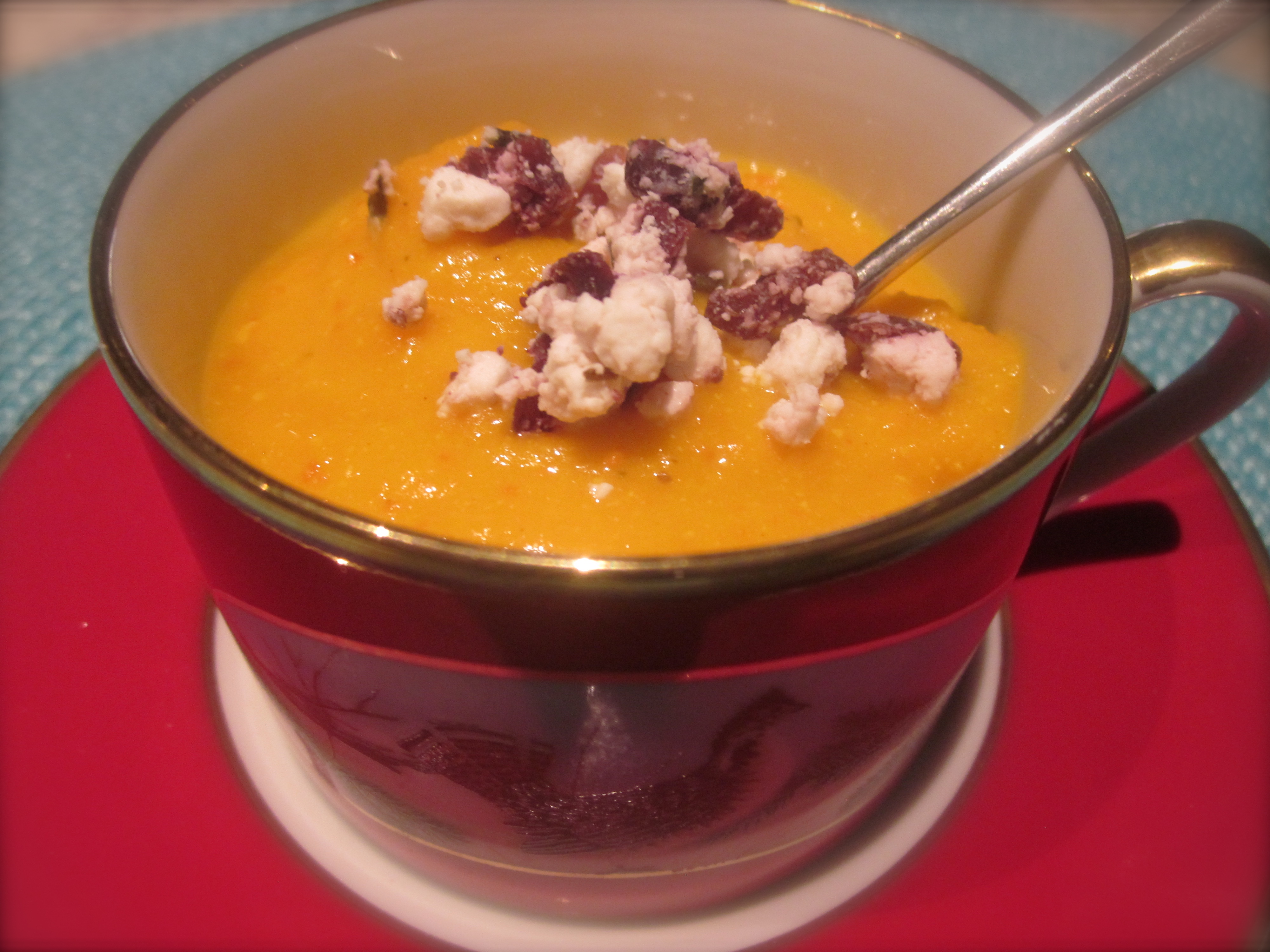 If you read last week’s Post, you are familiar with my midweek dinner party, Dorie’s Profound Sweet & Salty Nuts, and other food-fun nonsense. However, you didn’t realize we rapidly motored into serious mode, featuring a Squash Seminar followed by the tasting of this week’s recipe choice, Béatrix’s Red Kuri Soup. 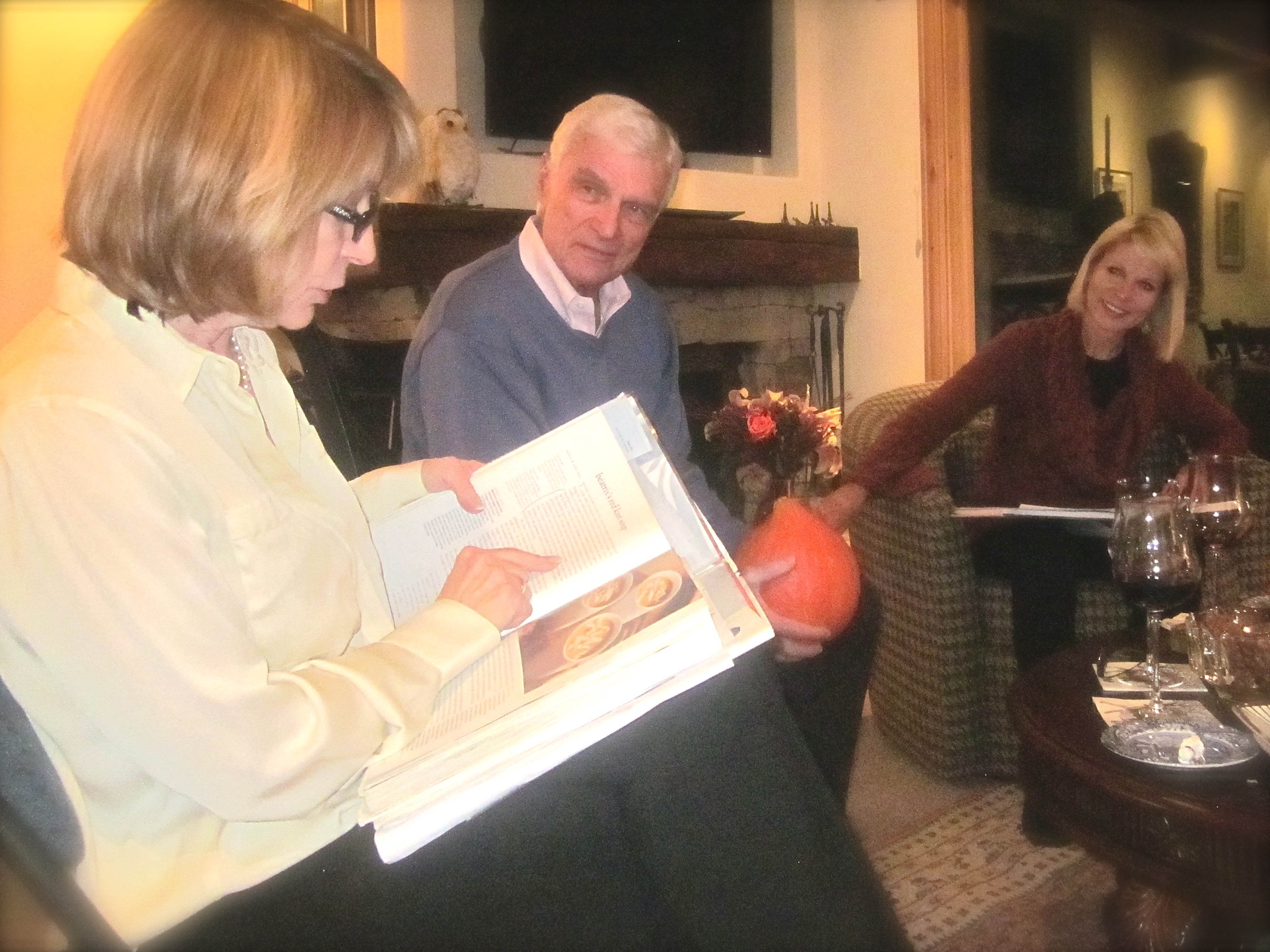 Leave it to the French to romanticize this delicate squash, calling it potimarron. Potiron means pumpkin and marron is the word for chestnut. Perfect and parfait. First, my guest, Judy, read about the recipe from our weekly bible, Dorie Greenspan’s Around My French Table cookbook. Judy, who spent her career teaching Aspen’s high school kids both French and Spanish, can roll her rrrrrr’s like none other. For those of us who have spent serious money to speak san succès français, it was a revelation.

Philip’s responsibility was to hold up the Red Kuri, my table centerpiece, every time the little darling’s name was mentioned in English or in French. He was kept busy. I had previously asked the mastermind of our nature study group, Donna, to give us the lowdown on the Red Kuri from a botanist’s point of view. She did such a good job she was rewarded with the centerpiece. 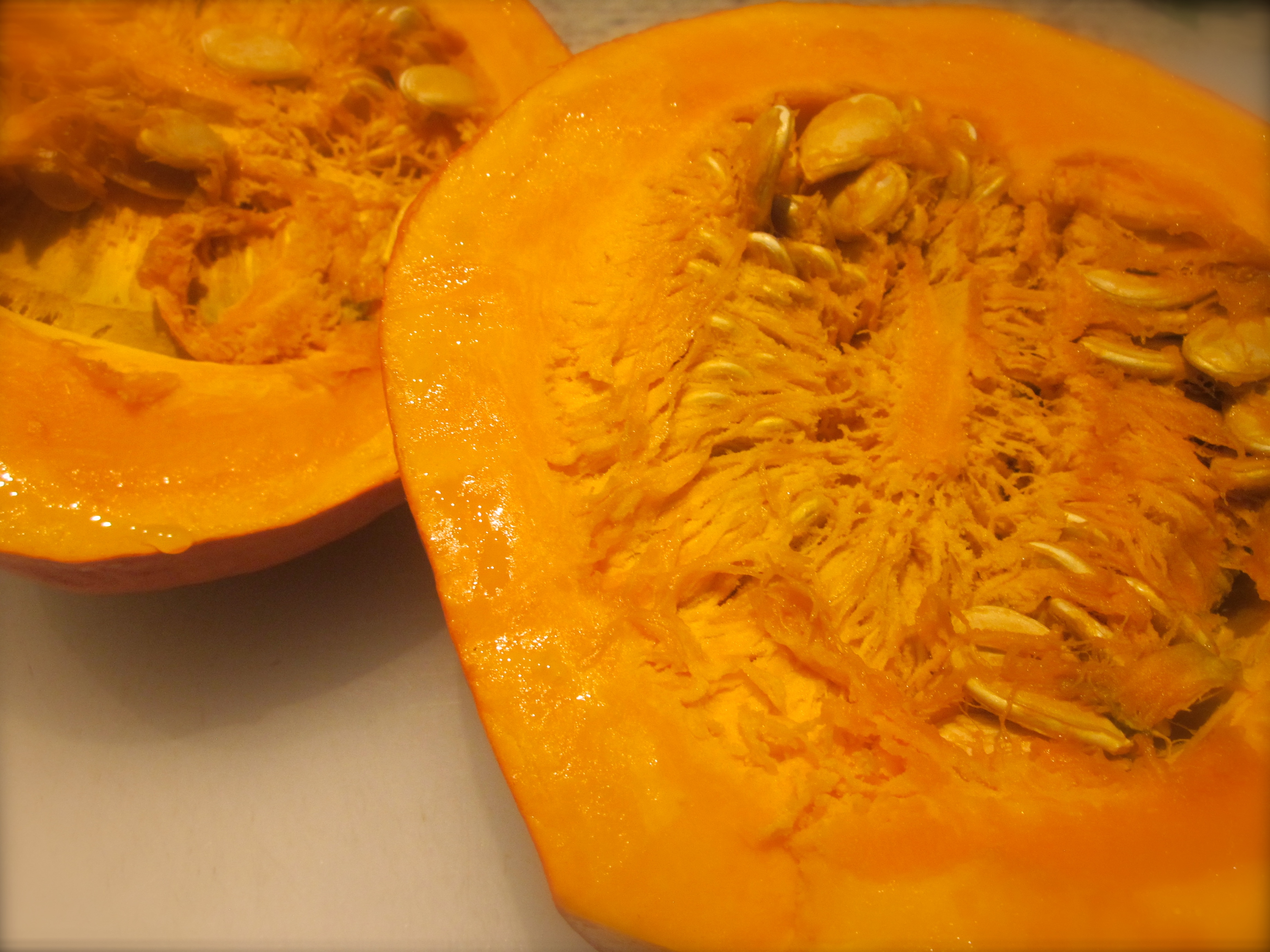 Because the Red Kuri is so flavorful, there’s not much work involved in pulling together this delicious soup. Dorie first tasted it at the table of her friend, Bèatrix Collet. I’ve posted her recipe below. This is a keep-it-simple dish, requiring little else for flavoring but 3 slender leeks. Use your creativity with the garnish. I used toasted walnuts and chopped apples. For my next-day’s lunch, I tried a goat-cheese/ cranberry mixture. Think also about sliced avocados, a squirt of olive oil and fresh lime juice. 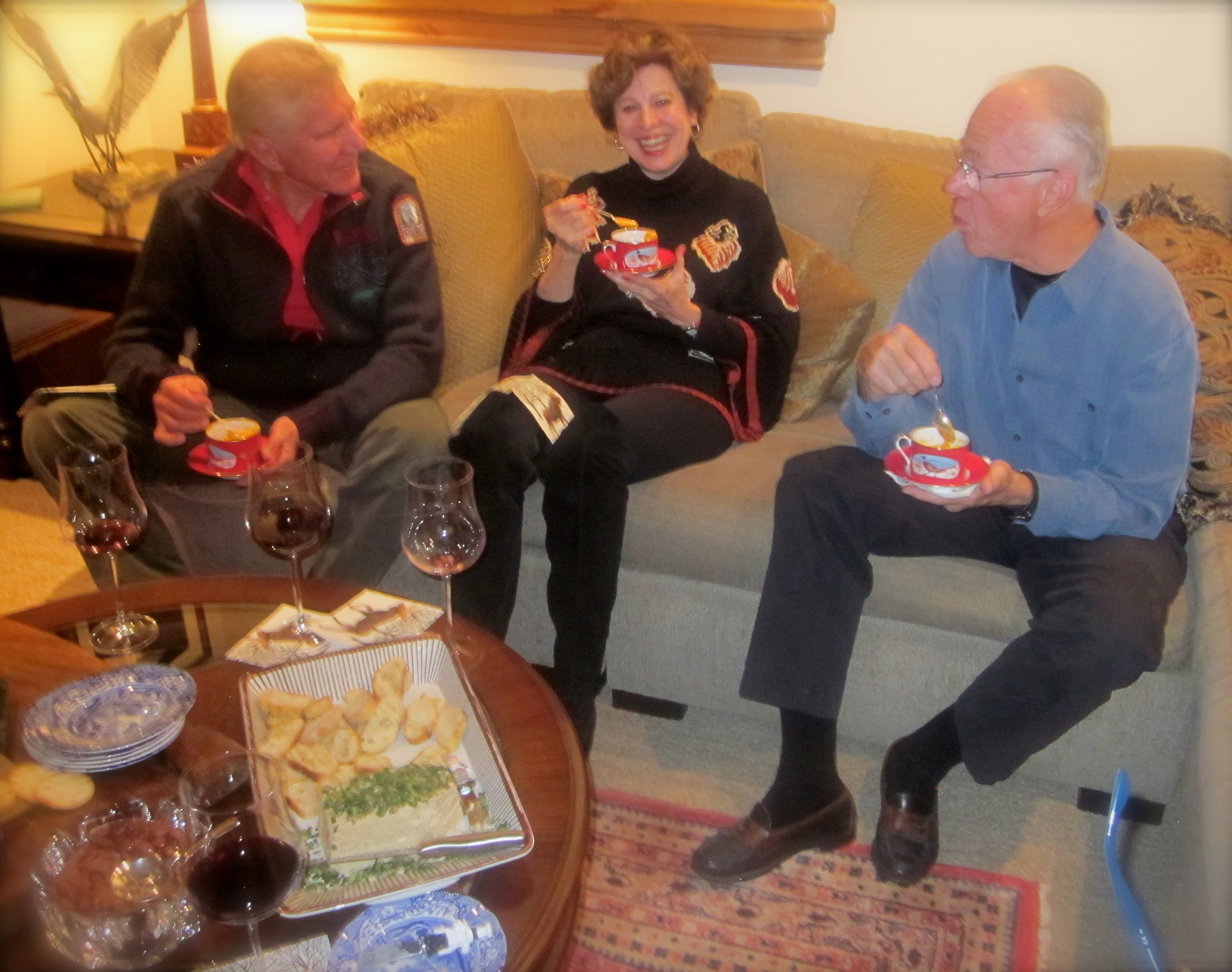 Feedback from my taste testers, Steve, Jessica and Don, who are taking their responsibility very seriously.

In the winter you can find Red Kuri squash, in various sizes, at most local grocery stores. Although I prefer a thick soup, it’s the cook’s preference and quite tasty, filling and satisfying either way. French Fridays with Dorie is an international on-line group winding its way through Around My French Table by Dorie Greenspan. To see what my colleagues stirred up this week, go here. 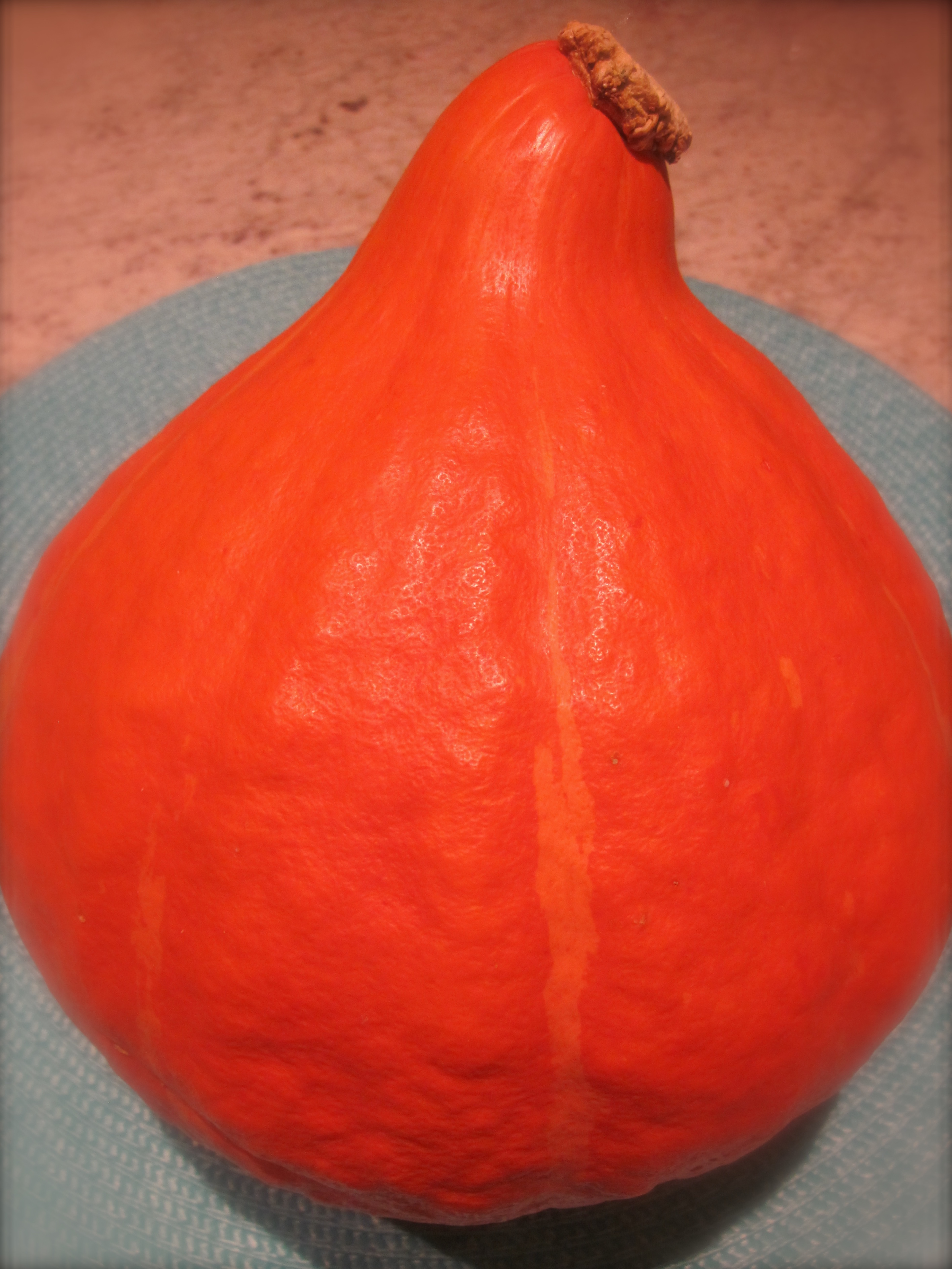 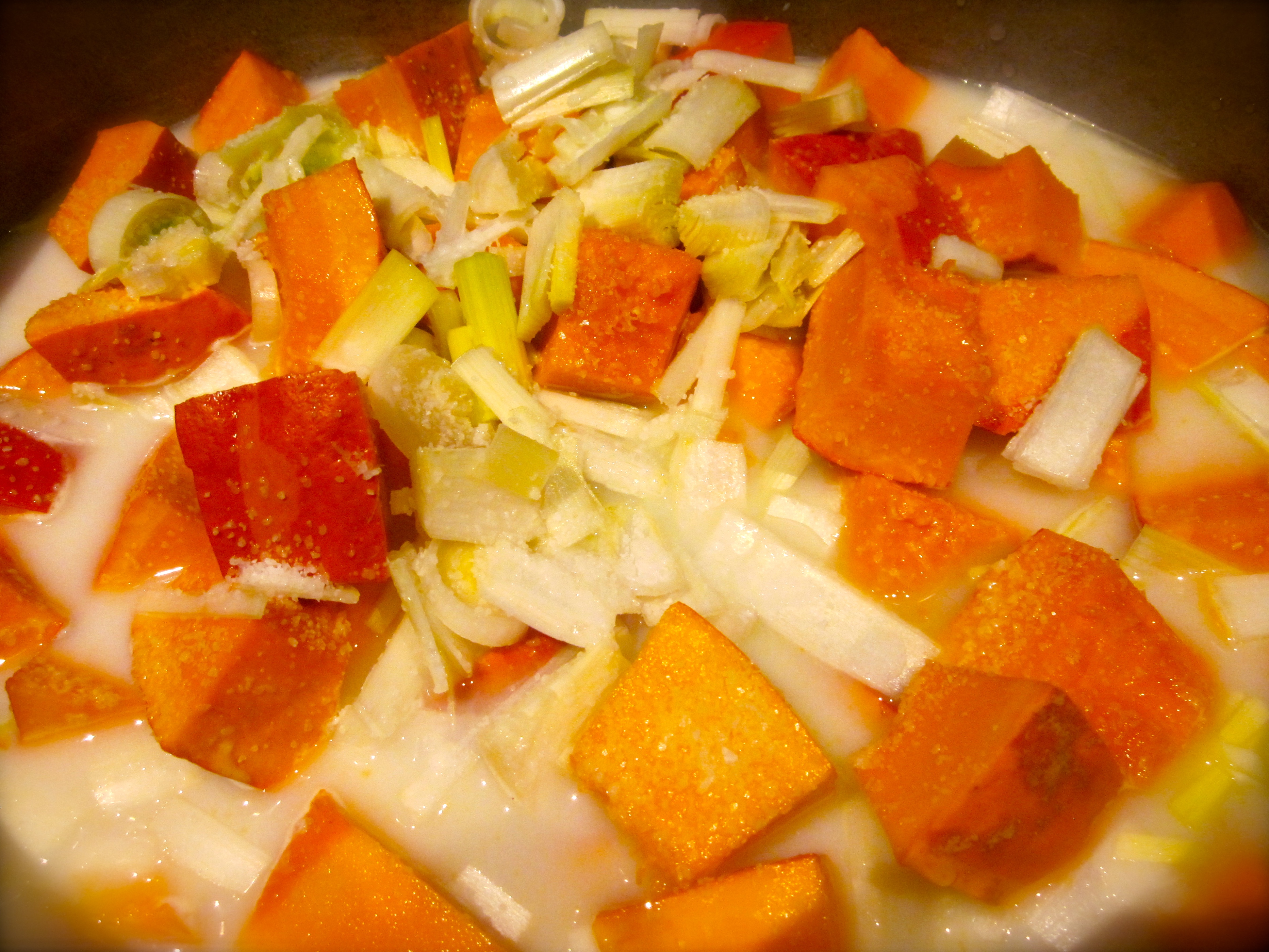 The cubed Red Kuri, sliced leeks, liquid and seasonings are in the soup pot and ready to boil and simmer. Serving: If you’re using the apples and nuts, spoon some into the bottom of each soup bowl and ladle over the hot soup; top with a little cream.

Storing: The soup will keep for up to 4 days in a covered jar in the refrigerator (it will thicken as it stands, so you might want to thin it when you reheat it) and for up to 2 months packed airtight in the freezer.

Bonne Idée: There are so many flavors that go well with this soup that you can make the basic soup and serve it several different ways. Top the soup with olive-oil sautéed bread cubes. Toss shredded sage into the skillet along with the bread. Or, use thin slices of toasted baguette sprinkled with grated cheese and run under the broiler – use a nutty cheese like Gruyere or Emmenthaler, or a blue cheese like gorgonzola or Roquefort. Why not sauté some cooked chopped chestnuts (you can use bottled chestnuts) in a little butter or oil, season with salt and pepper, chopped fresh thyme or sage. Either spoon a little over the soup or, better yet, over the crème fraiche, if you’re using it.