In our family we’re a mixed bag as far as religion is concerned. My husband, Michael, was Jewish. I am Episcopalian. My son-in-law’s father was a Lutheran minister. My daughter finds truth and power in Buddhist principals. My granddaughters  attend a Seven Day Adventist school. And just recently, I’ve found hope in the writings of Pope Francis.

If there really is a limb, we’re way out there.

However, the religion and culture that has most impacted my life the past twenty-five years is Judaism. One facet of that impact, of course, is the food of observances and celebrations. Soon after our arrival in Aspen in 1988, Michael and I were embraced by the local Jewish community. I am comforted by knowing he enjoyed the retirement of his dreams here and those friends contributed mightily to that joy. 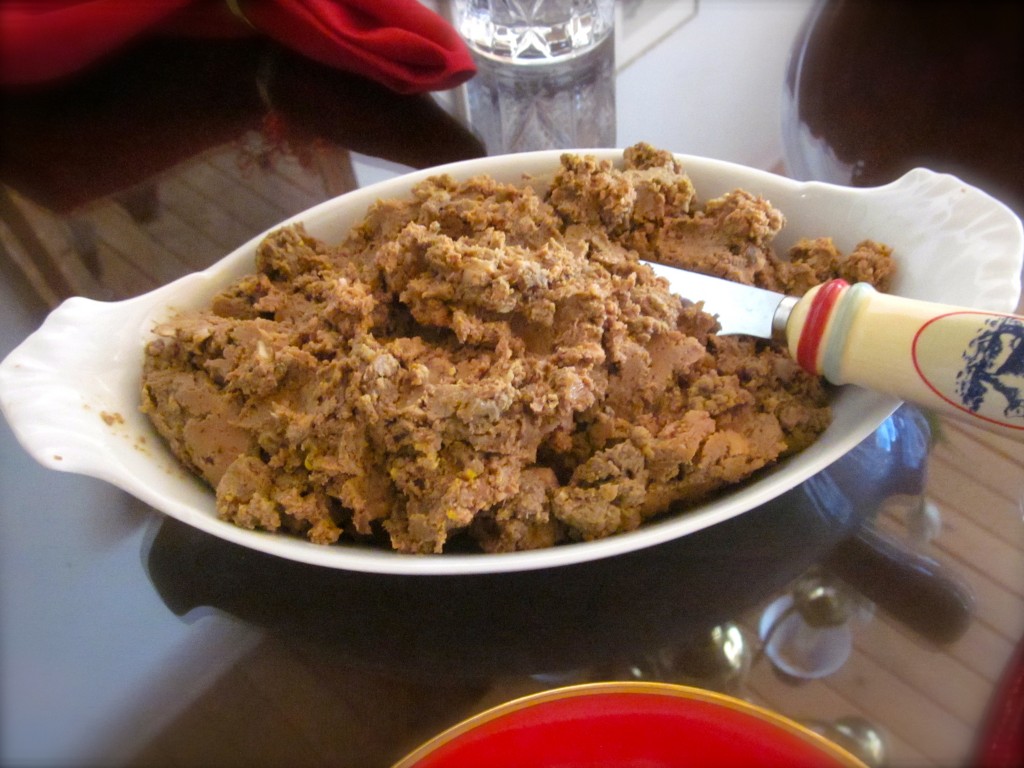 Which brings me to chopped chicken liver.

This week’s French Fridays with Dorie recipe is Mme. Sonia Maman’s Chopped Liver. Although I always contributed food to those parties, I left the chopped liver to the pros. My speciality was Haroses, a mixture of apples, nuts, wine and cinnamon used at Passover Seder. I also participated in the brisket bake-offs. My arm still has the burn marks to prove it. 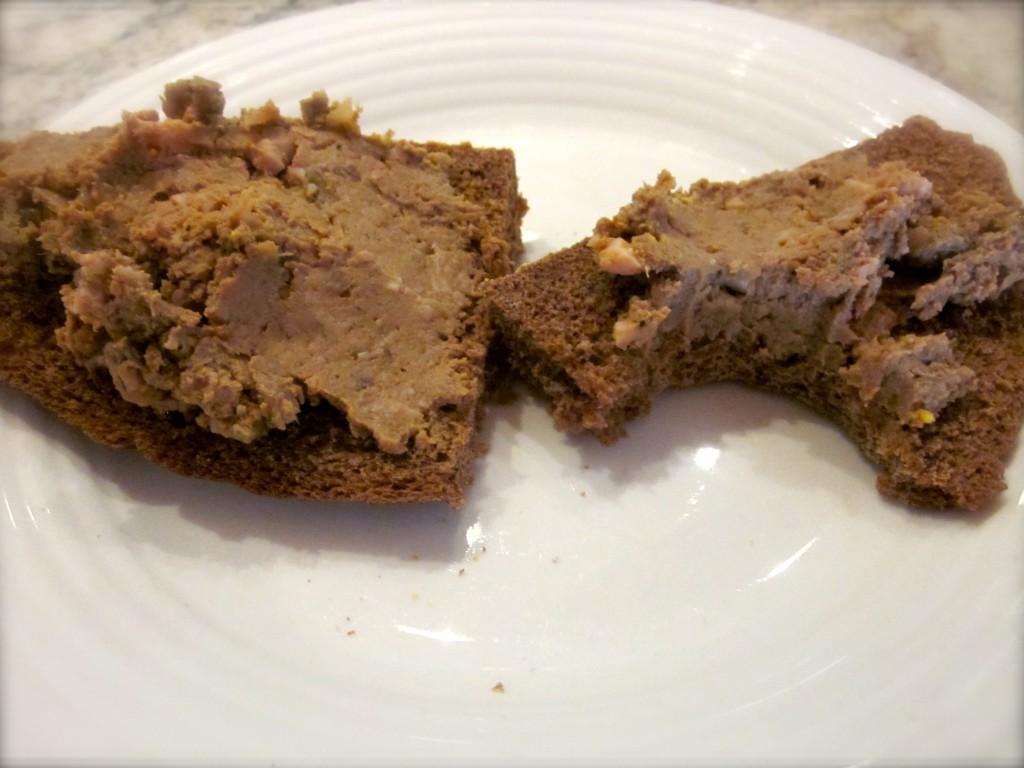 I never had made chopped liver. Kudos to Mme. Maman for substituting a heart-healthier peanut (or, grapeseed) oil for the traditional schmaltz which is rendered chicken fat. Her recipe is simple. Cook 2 chopped onions in oil until nicely browned. Remove the onions from the pan to drain and add the chicken livers to brown also. Because I wanted a paté rather than coarsely chopped livers, I threw the onions, livers, and seasonings  into the food processor and did the blitz. After stirring two chopped hard-boiled eggs into the mixture, I covered it tightly before placing in the fridge.

Although this is tasty (and, I took a bite), I realized this stuff could kill you. That’s when I called Mindy, one of my younger, health-conscious Jewish friends to ask if chopped livers graced her table and those of her friends. Her distaste for chicken livers came through humorously but loud and clear. 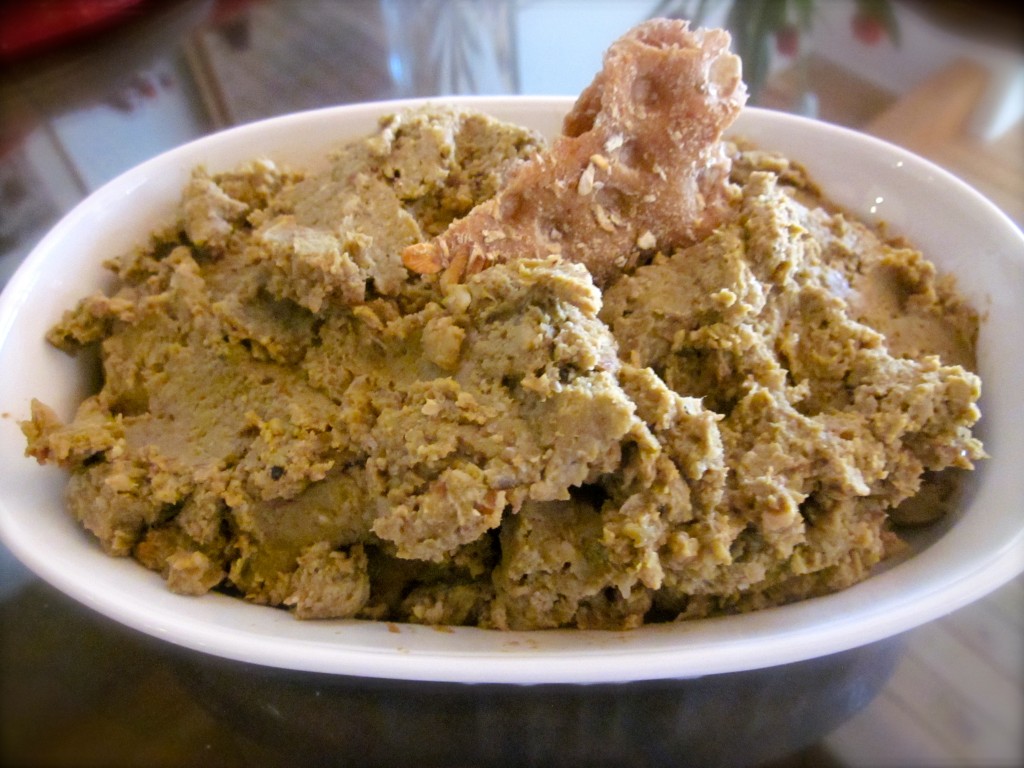 “Would you like me to send you my vegetarian version?” she asked. “It’s almost, almost as good as the real thing. Whenever I make it, it’s always eaten up.”

Salt and Pepper, to taste

Throw the bread, peas, and onions in a food processor and pulse into a mixture. Salt and pepper liberally to taste. Scrape the mixture into a bowl and stir in the egg and walnuts. Cover the bowl and refrigerate the mixture for two to three hours before serving.

In my taste-off, the peas held their own with the livers. Admittedly, because it was “almost, almost as good”, my heart has to belong to healthy.

French Fridays with Dorie, is an international cooking group working its way through Dorie Greenspan’s latest cookbook “Around My French Table”.  If you would like to see how my colleagues dealt with their livers, go to our FFWD link.