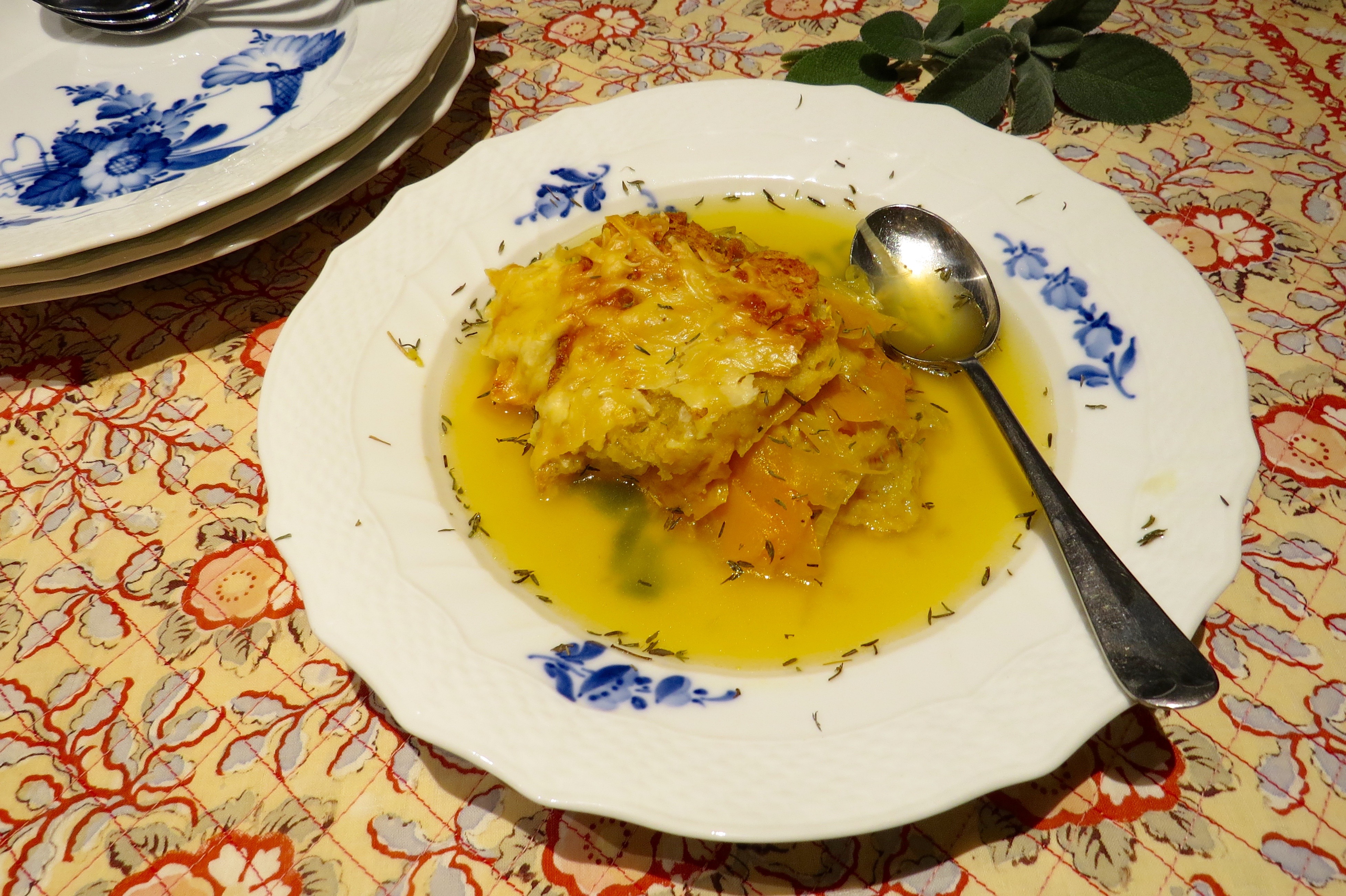 We’ve had intermittent snowfalls this week which translate to a wide community grin. Bring it on, El Niño. It’s cold enough – 28 degrees is the magic number – to crank up the snow makers. At night I can hear the guns shooting their white dust onto nearby Aspen Mountain. We host the women’s FIS Ski World Cup on Thanksgiving week-end. The ladies need snow. 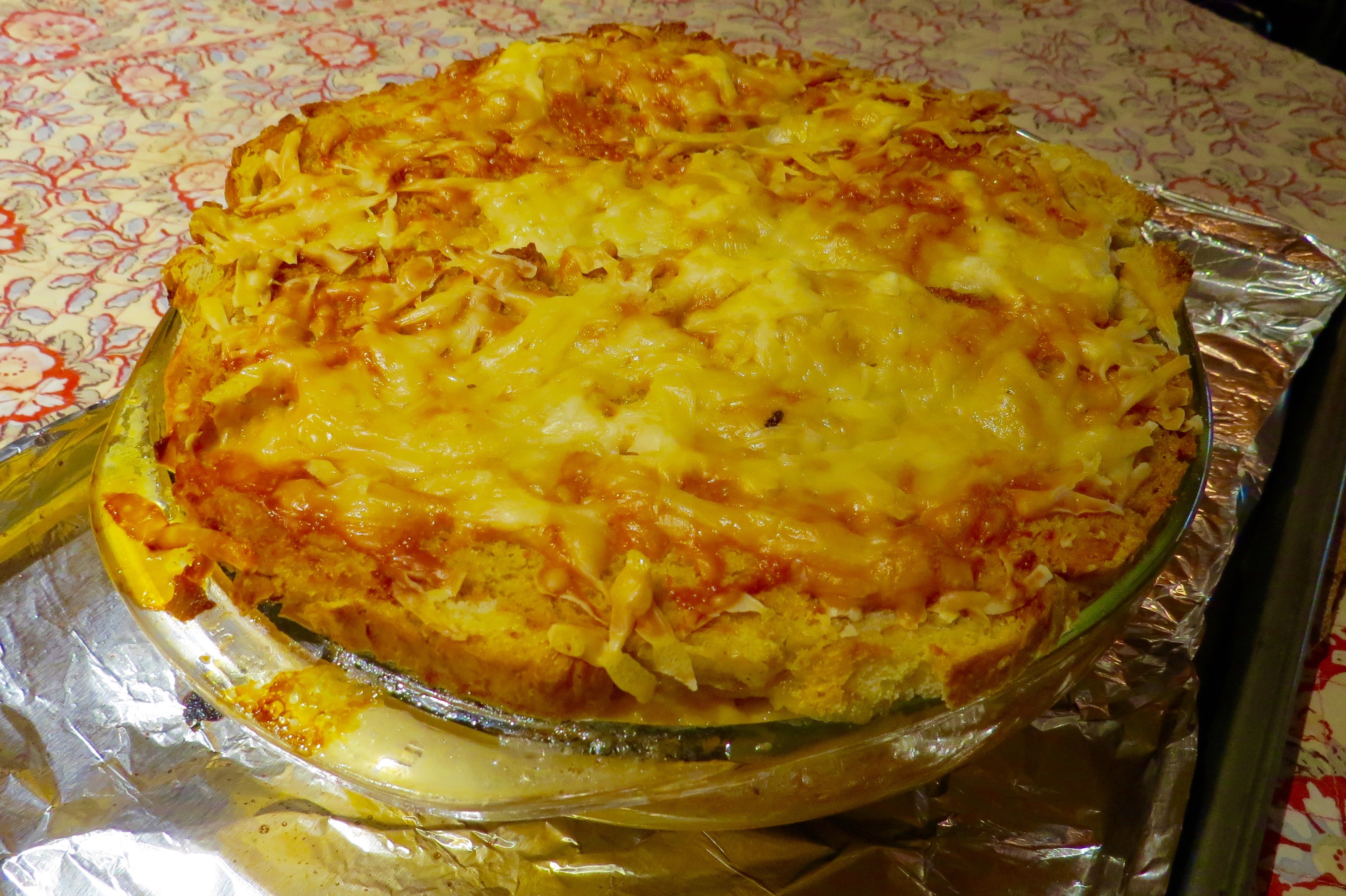 ’Tis the season for comfort food. For me, hearty, homemade soups spell satisfaction for those upcoming chilly November evenings. This week’s Panade de Butternut from David Lebovitz’s My Paris Kitchen cookbook is not French despite its fancy name. This butternut squash bread soup (sounds better in French) has become one of my top five favorite dishes.

Before we cook, however, let’s have a bear chat:

The Scene #2: Off-season. No paying customers here. The front office is closed. The D-Building, except for me, is empty.

The Villain: A bear-proof trash container stuffed with take-out food containers and champagne bottles in violation of No Trash after 8pm Sign. 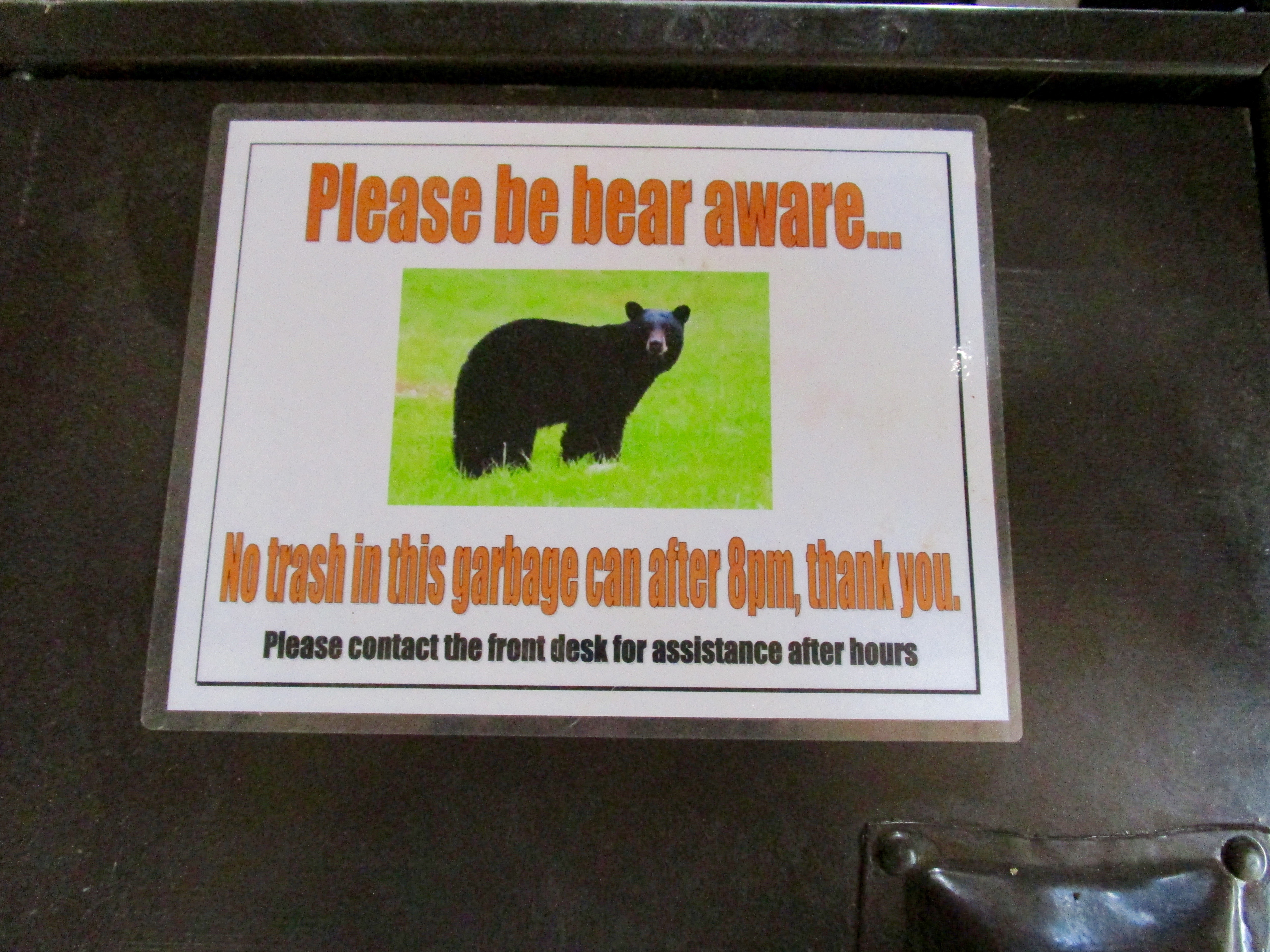 WHAT IS NOT TOTALLY CLEAR ABOUT THIS SIGN WHICH IS POSTED ON TOP OF THE TRASH LID? A FED BEAR IS A DEAD BEAR.

The Actors: A Black Bear and Me

The Plot: My Best Wildlife Moment 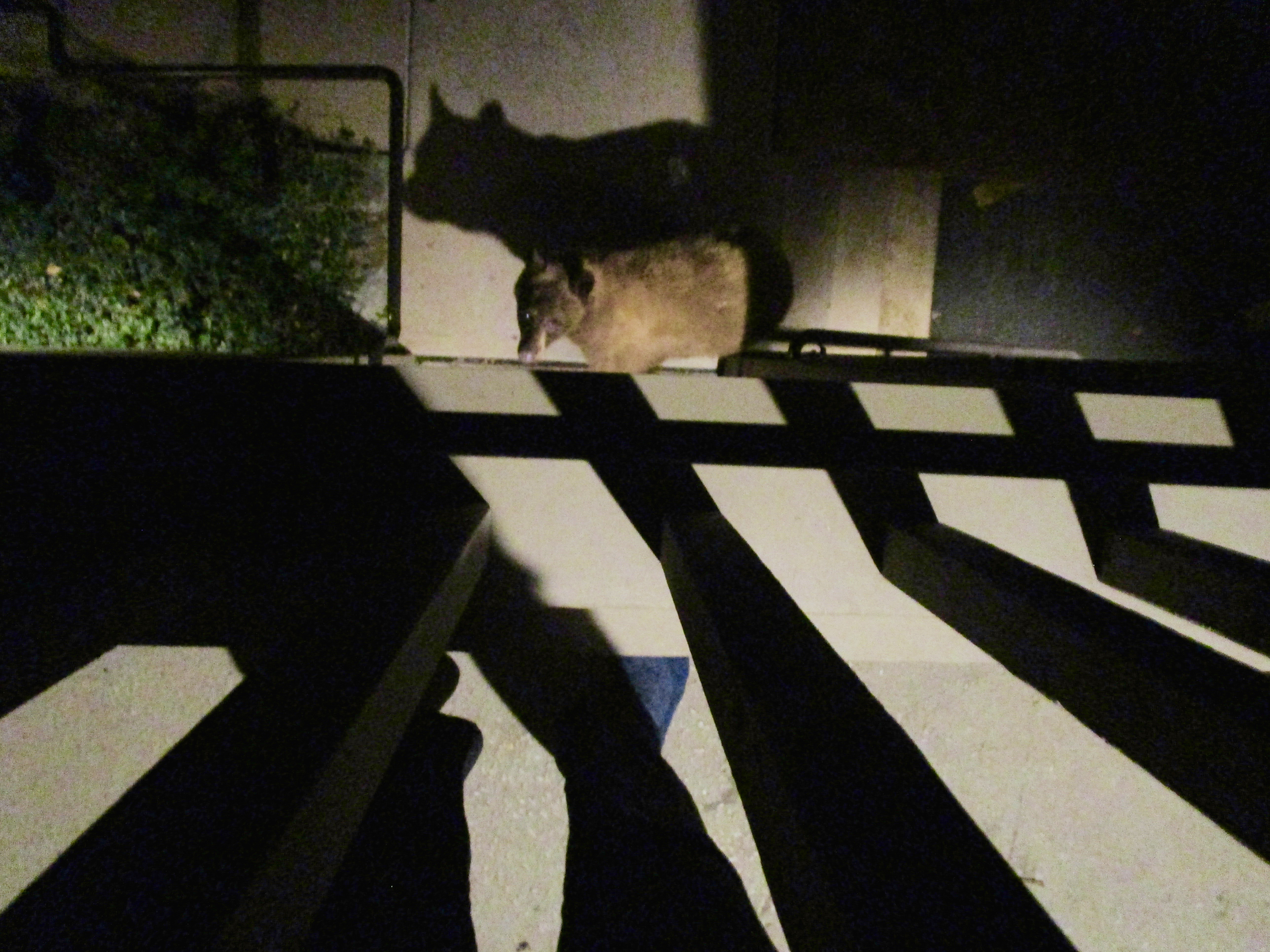 WHOOPS! THE BEAR REALIZES SOME CRAZY LADY IS UP THERE TAKING PICTURES WITH HER CAMERA.

Late Sunday night I heard the unmistakable sound, crash and banging of my trash can tipping over. There isn’t a bear in Pitkin County who can’t claw into Aspen’s bear-proof containers if they smell goodies. Since I’m on the second floor, I ran outside to see a delighted bear dumpster diving. I grabbed my camera and, with the first click, notified the bear I was upstairs.

You don’t yell at bears but I did scold and plead with him but, silly me, he wasn’t leaving until he’d devoured the mother lode. After all, for the 5-6 months he’s in hibernation there will be no pizza deliveries. At one point he lumbered into the parking lot and sat on his haunches before returning to finish his meal, ignoring me completely. 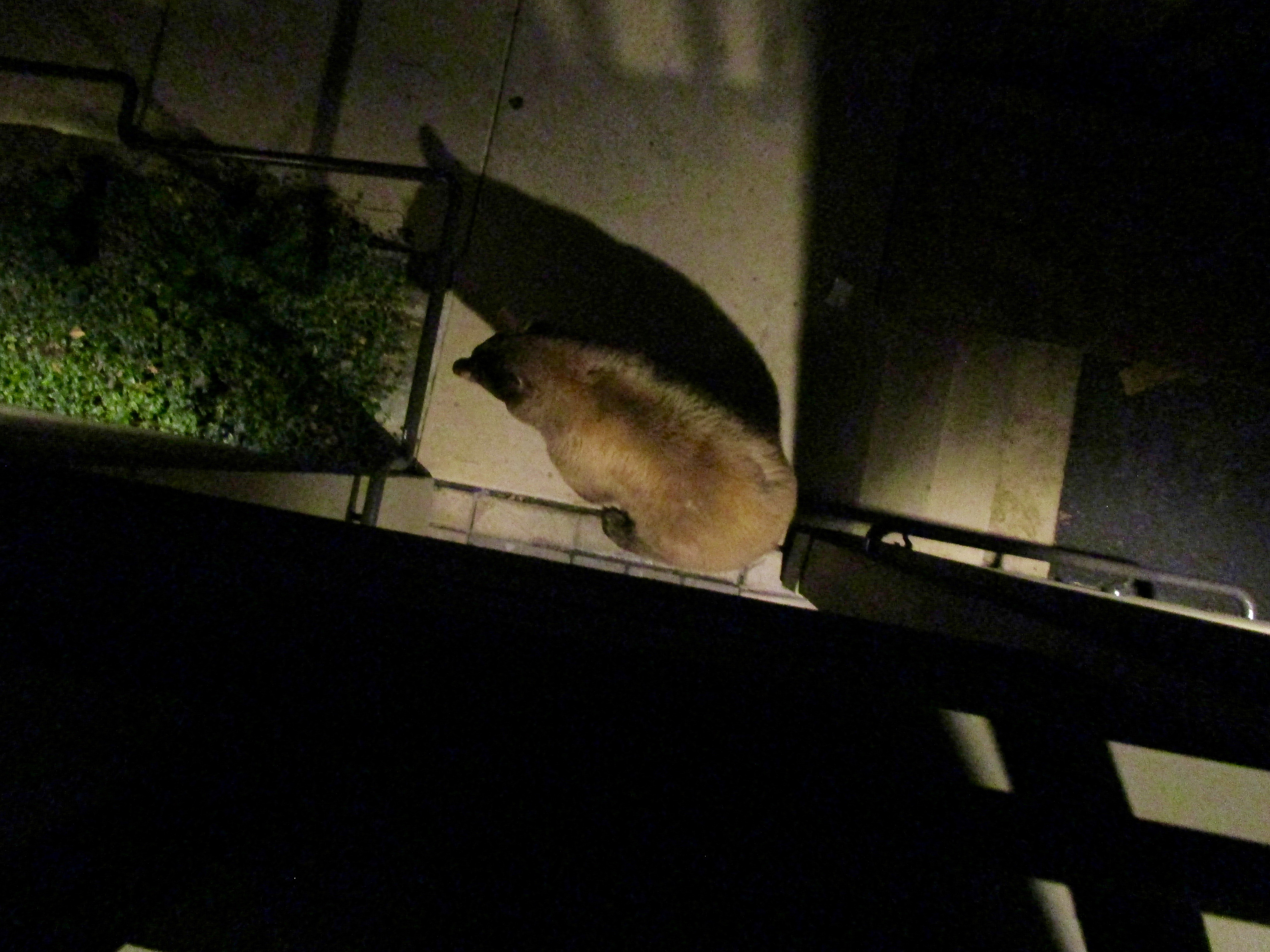 I AM OBVIOUSLY BUGGING THE BEAR. HE WALKS OUT TO THE PARKING LOT, SITS FOR A FEW MINUTES AND RETURNS. AS FAR AS THE BEAR IS CONCERNED, I DON’T EXIST.

After 20 minutes or so, he departed, leaving a huge mess which I was not brave enough to go down and clean up. The next morning, at 7am, one of our bellman did just that. (Thanks, Nic.) I did not call the police who would have bean-bagged the bear and fined The Gant. What was an exciting encounter for me was unfortunate for this bear who was just being, well, a bear. 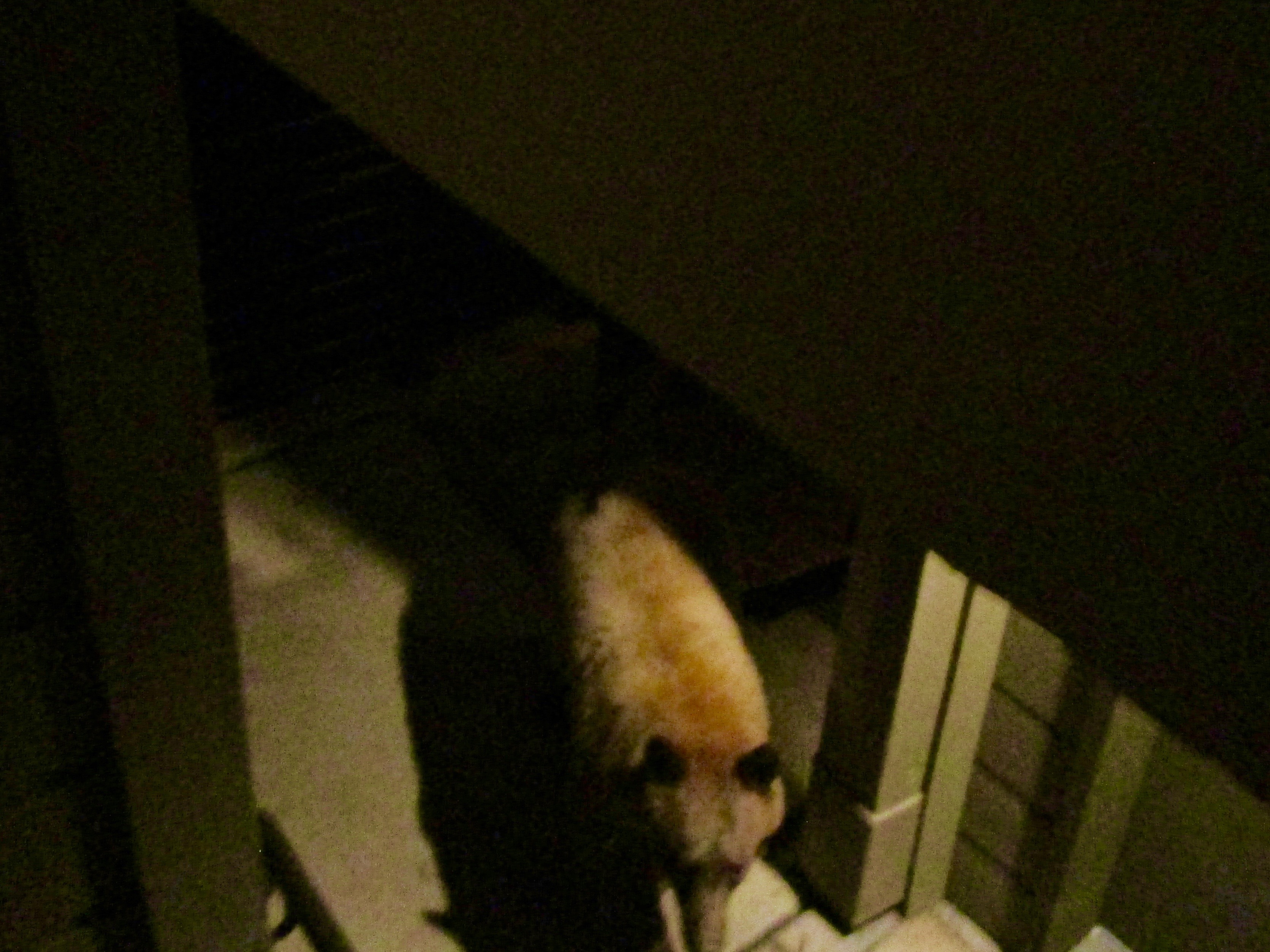 MY BEAR, RETURNING TO FINISH UP HIS MEAL. HE IS NOT AT ALL INTIMIDATED BY ME. AFTER ALL, HE’S BIGGER.

For the rest of the off-season or until the bears go into hibernation, I’ve appointed myself the evening trash-monitor here. No more nibbles available on my watch. 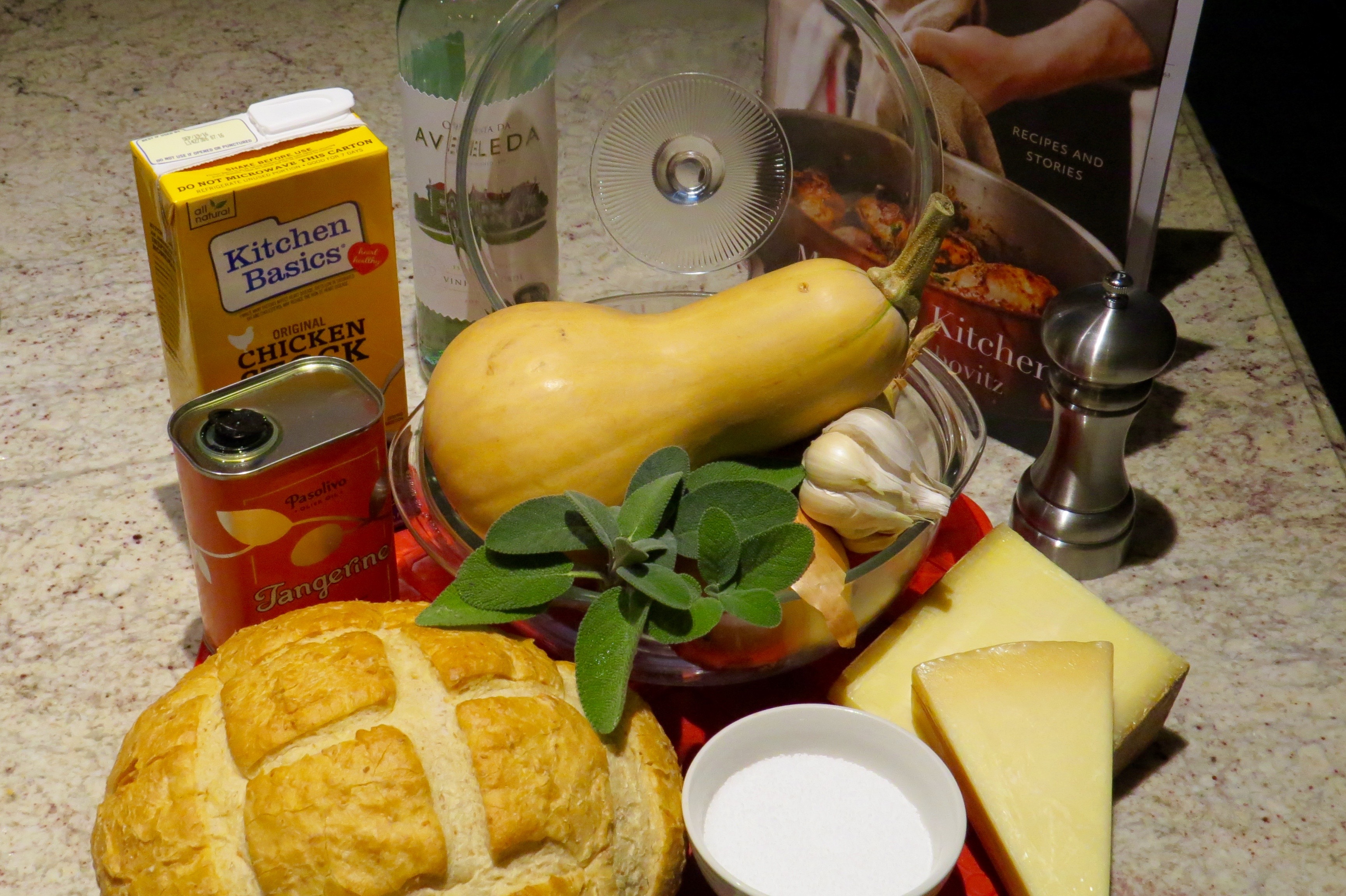 MISE en PLACE, THE INGREDIENTS NEEDED FOR THE PANADE

“This panade is one of the few dishes I’ve eaten in my life that I’ve never forgotten,” Lebovitz writes.

Because I suffer with squash addiction every Fall, David’s endorsement piqued my interest. This is not a complicated recipe but I’ve been more thorough than usual with details, photos and directions. It’s a unique ‘baked casserole that’s served like soup but is hearty enough to be a full meal.’

For baking, a 4-quart baking dish is preferred, because the greater the width, the more crusty cheese topping you’ll have when the panade is finished. Whatever size you use, it should have sides that are at least 3 inches high. I used a 2-quart dish and halved the recipe for this post but will use my 4-quart rustic terra cotta dish next time. 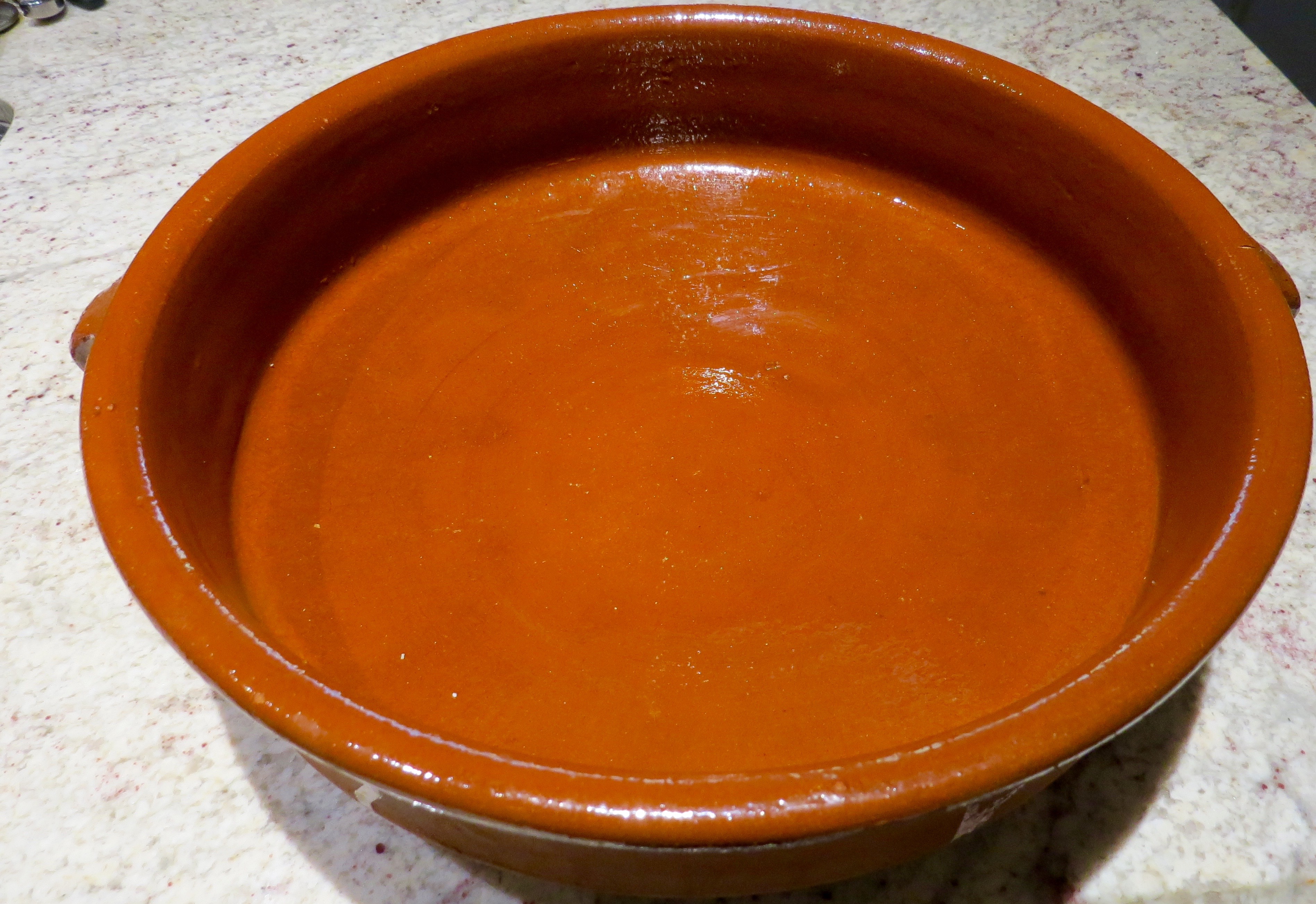 ALTHOUGH I HALVED THE RECIPE, USING A 2-QUART DISH, THIS IS THE 4-QUART DISH WITH A 3-INCH LIP THAT I WOULD NORMALLY USE. IT’S PERFECT.

by Seen Lippert to David Lebovitz, My Paris Kitchen Cookbook

1. Melt the butter with the olive oil in a wide skillet or Dutch oven over medium heat. Add the onions, the 2 cloves of sliced garlic, and 1 teaspoon of the herbs. Cook for about 25- 35 minutes, stirring occasionally, until the onions are completely wilted and beginning to brown on the bottom and edges. 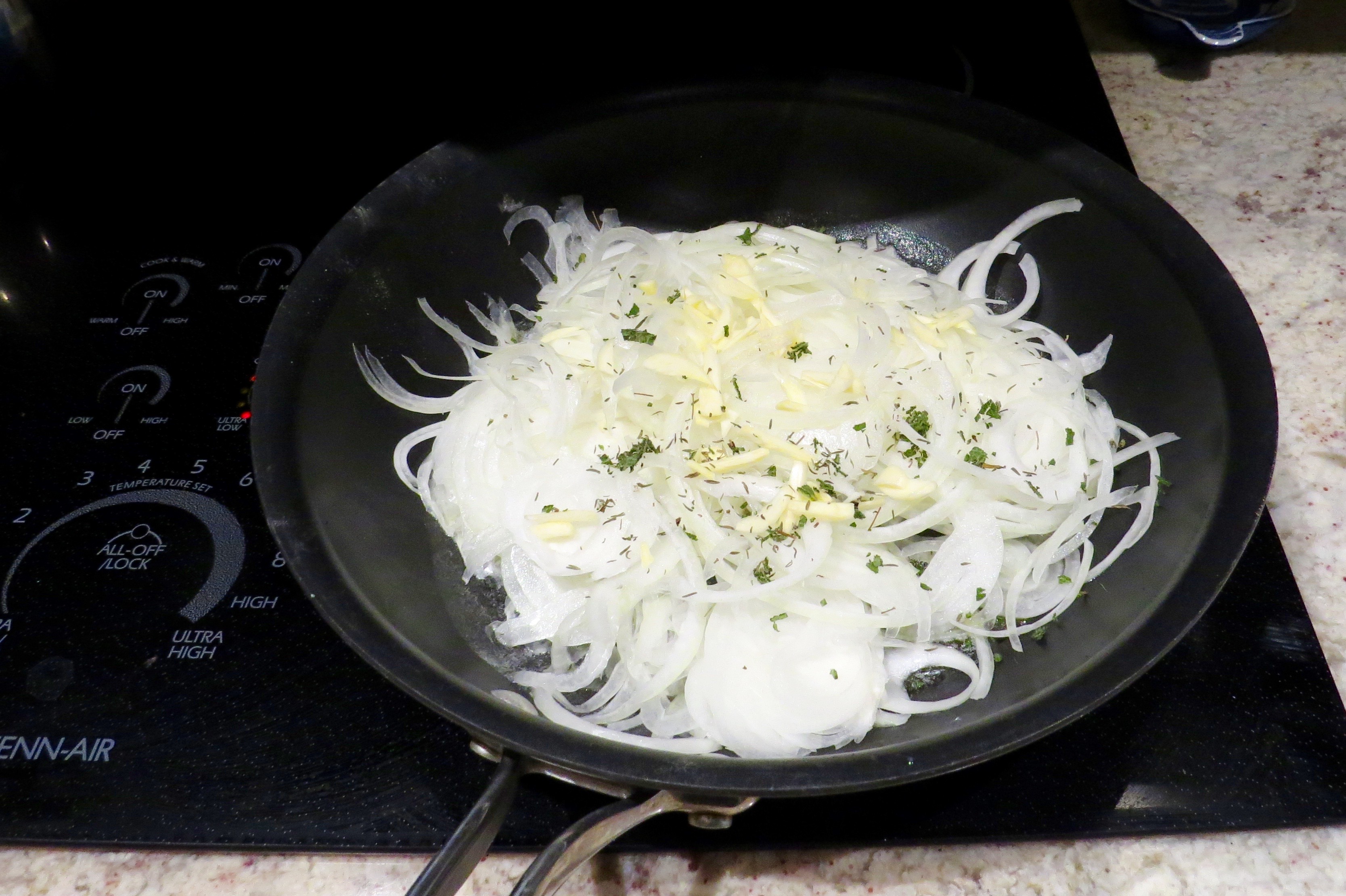 AFTER MELTING BUTTER WITH OLIVE OIL IN THIS PAN, I ADDED ONIONS, GARLIC AND HERBS TO COOK FOR 25-35 MINUTES.

2. While the onions are cooking, preheat the oven to 375 F. Put the slices of bread on baking sheets in a single layer and toast in the oven, turning the slices over midway, until both sides are dry, 10 to 12 minutes. Remove from the oven and when cool enough to handle, rub both sides of the slices with the whole garlic cloves. 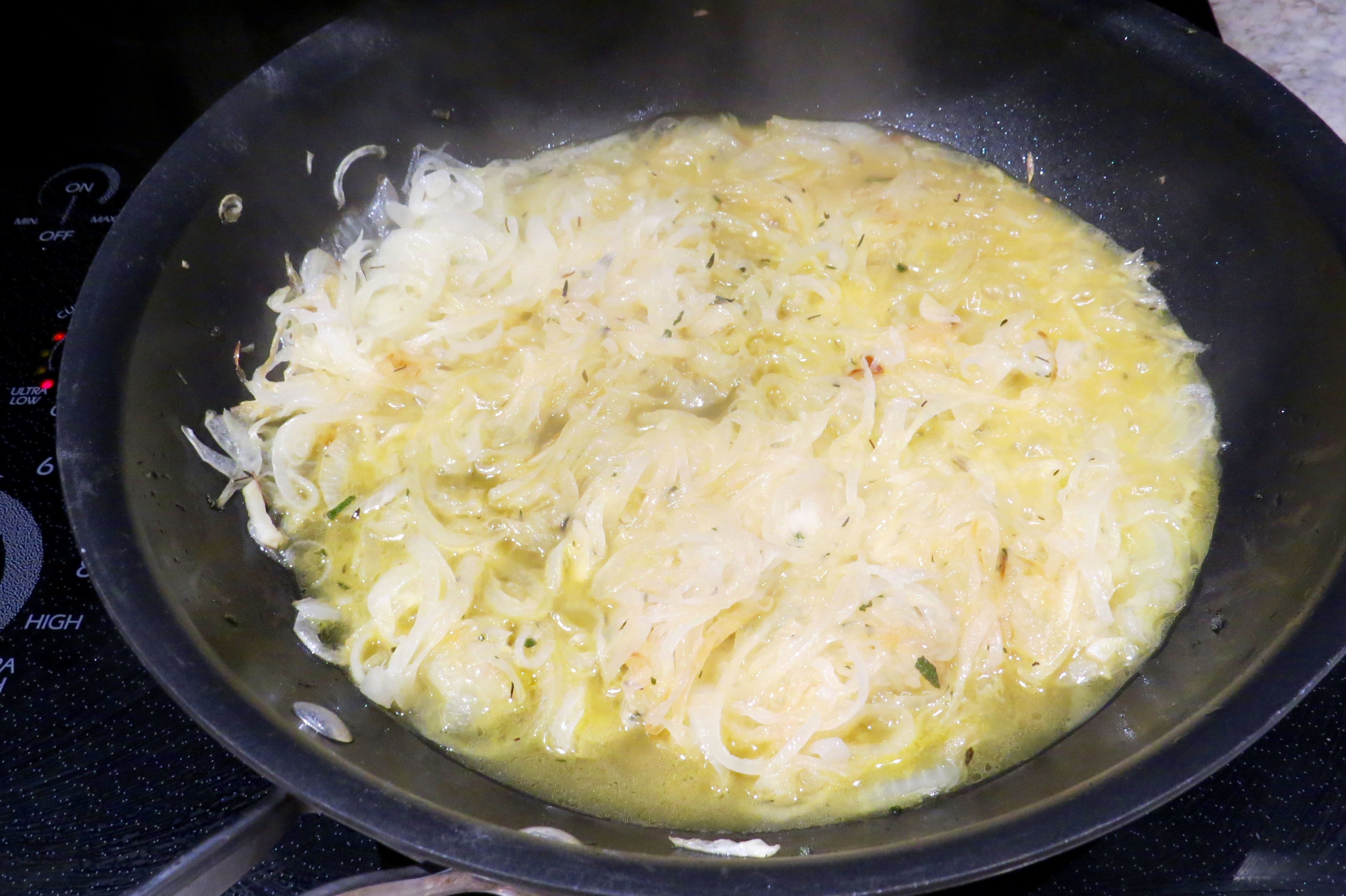 THE ONIONS ARE COOKING WITH THE WINE AND THE STOCK WHICH I AM SLOWLY ADDING.

4. To assemble the panade, cover the bottom of a 3- to 4-quart baking dish with a layer of bread, breaking any pieces so they fit in a single layer, but keeping them as large as possible. Ladle about half of the onions and some of the stock over the bread, and then cover with half of the squash slices. Season lightly with salt, pepper, and half of the herbs. Sprinkle with 1/2 cup of the grated cheese. 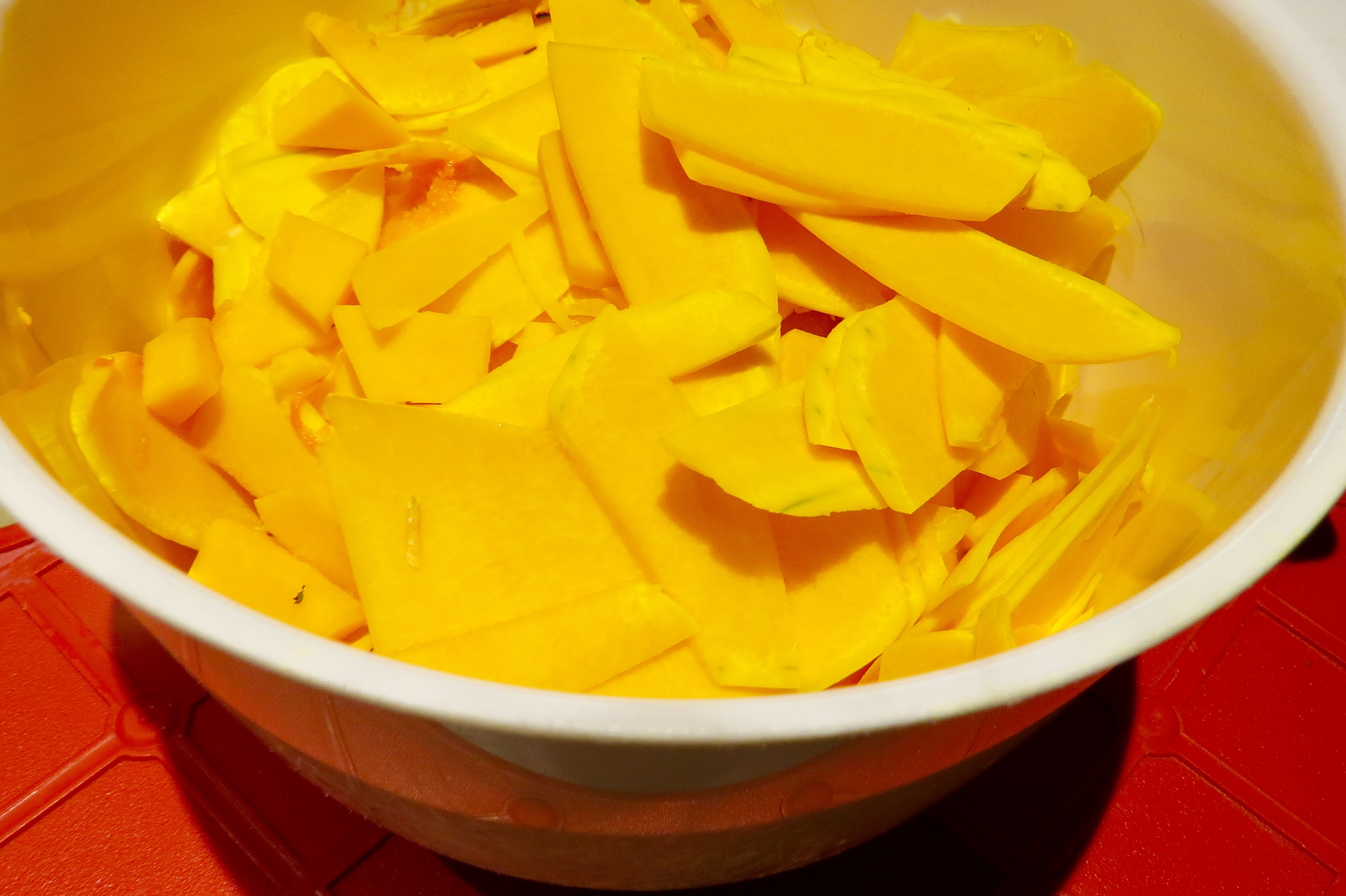 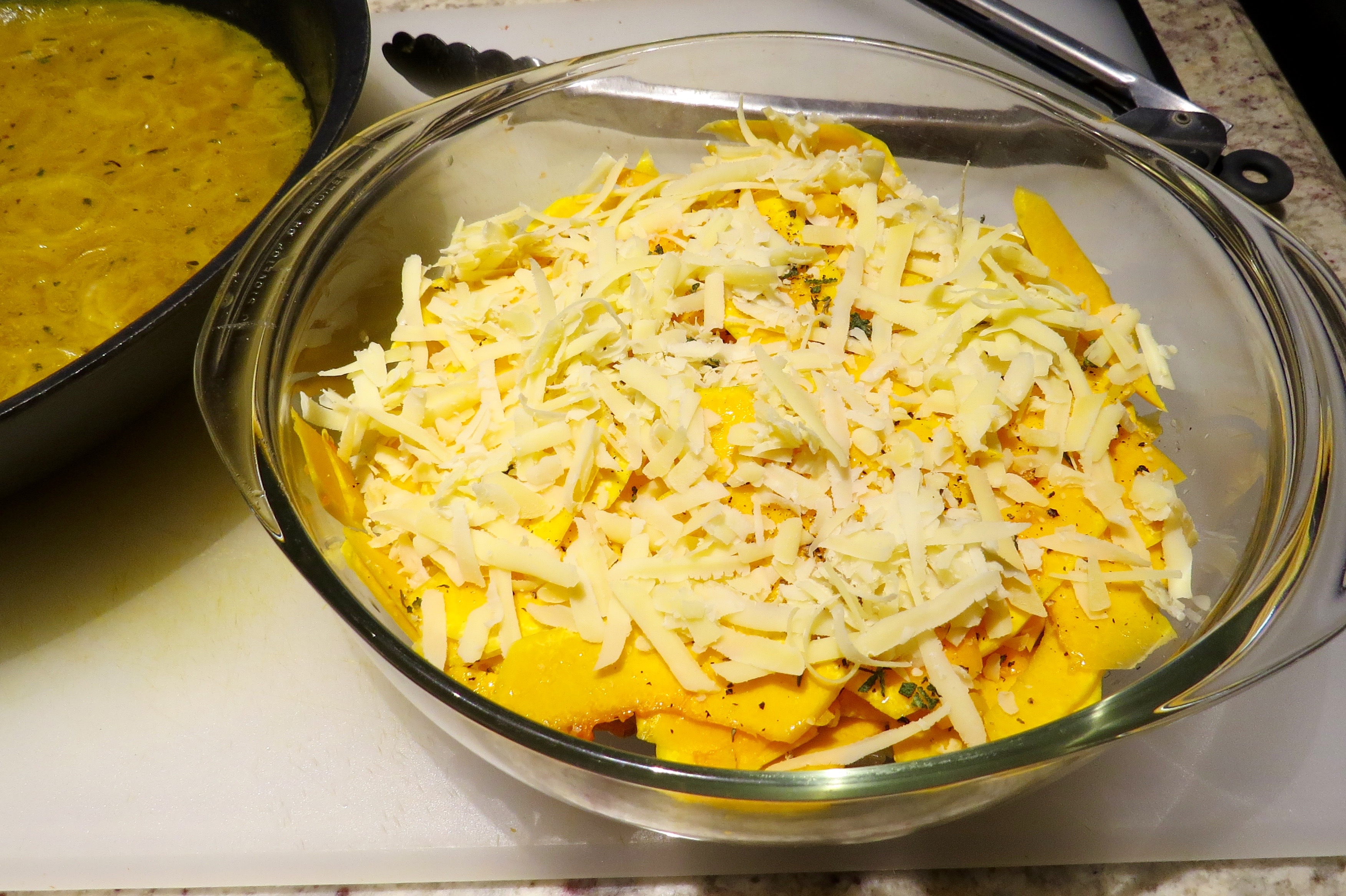 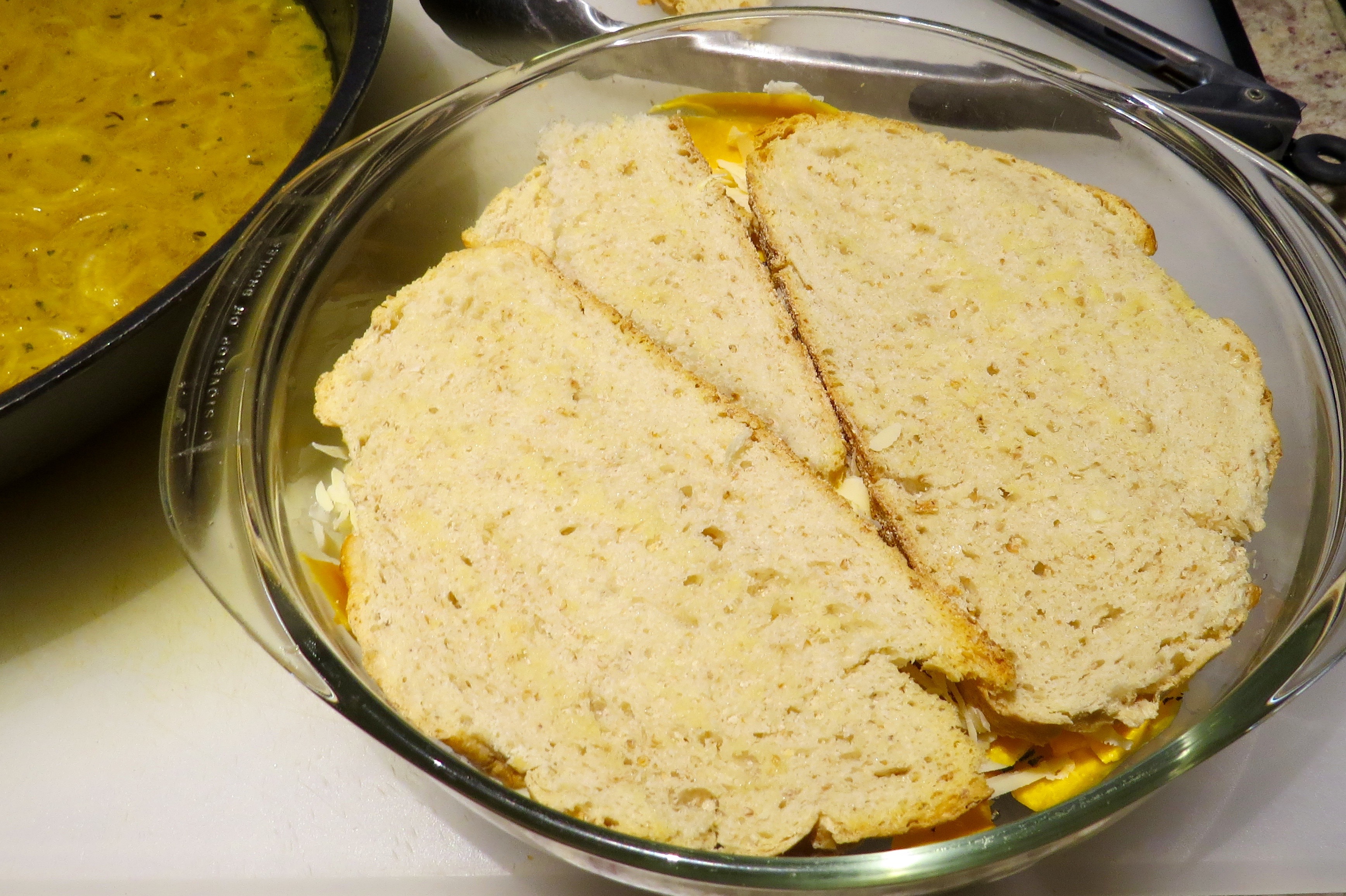 THE BEGINNING OF THE TOP LAYER, NUMBER THREE

6. Cover the baking dish with aluminum foil and tighten it around the edges, but don’t press it down on the surface or some of the cheese may stick to it during baking. Set the baking dish on a foil-lined baking sheet to catch any spills. Bake for 45 minutes, uncover the panade, and bake for another 30 minutes, or until the panade is very well browned and crisp on top. 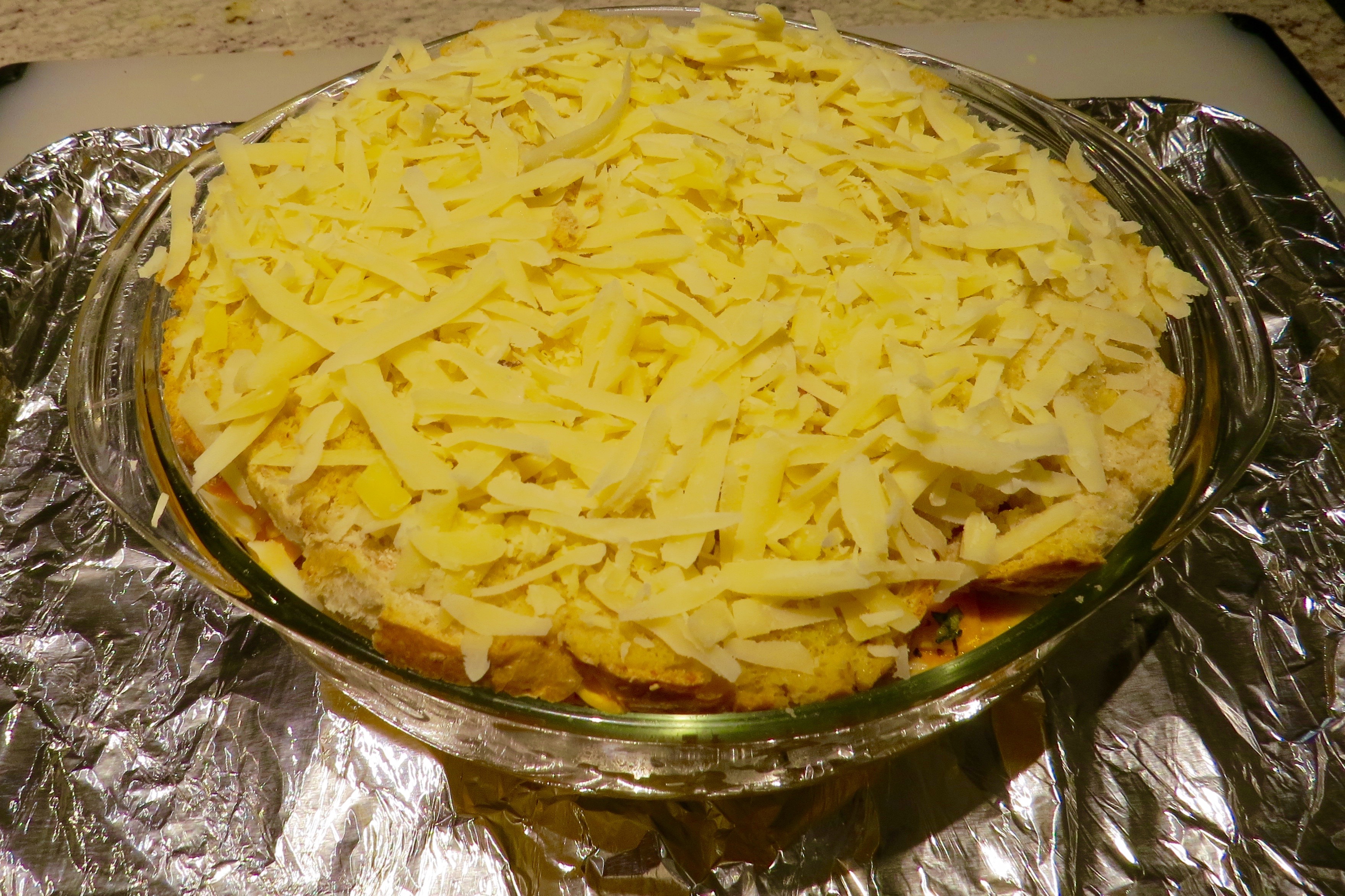 JUST GOING INTO THE OVEN-I COVERED WITH TINFOIL FIRST 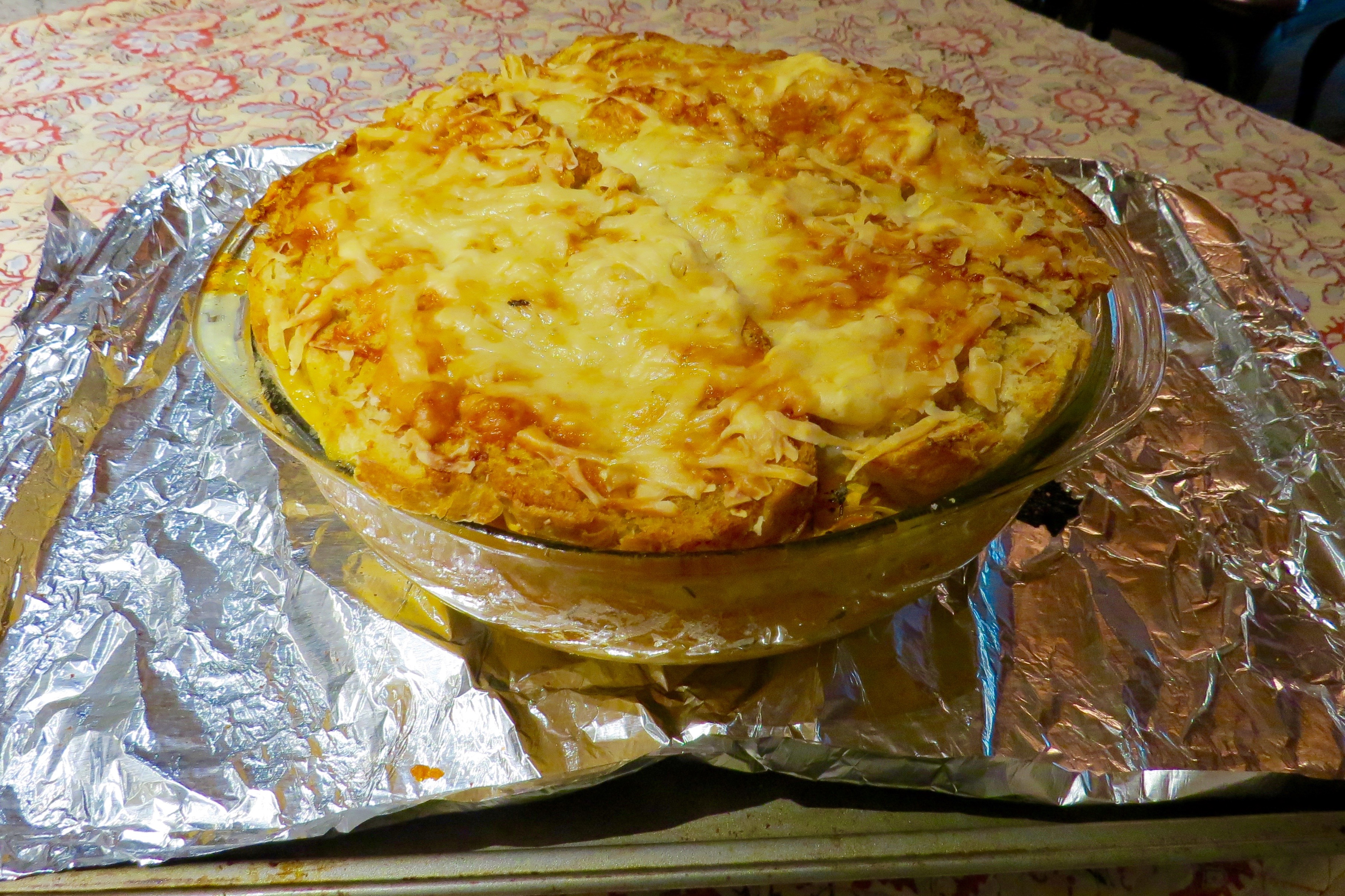 JUST COMING OUT OF THE OVEN

7. Let cool for about 15 minutes and then spoon portions of the panade into soup bowls, making sure everyone gets a highly prized layer of the crusty topping. As you serve, ladle additional warm broth over each bowl if you wish and put extra on the table.

TIP: I sprayed the tinfoil with Pam so it would not stick to the top cheese crust.

Although I try to complete a jigsaw puzzle every month, why not try one yourself this winter? On a chilly winter evening what’s not to love about a leafy green salad, Panade de Butternut, a glass of Cabernet Sauvignon followed by putting together a puzzle. Delightful. 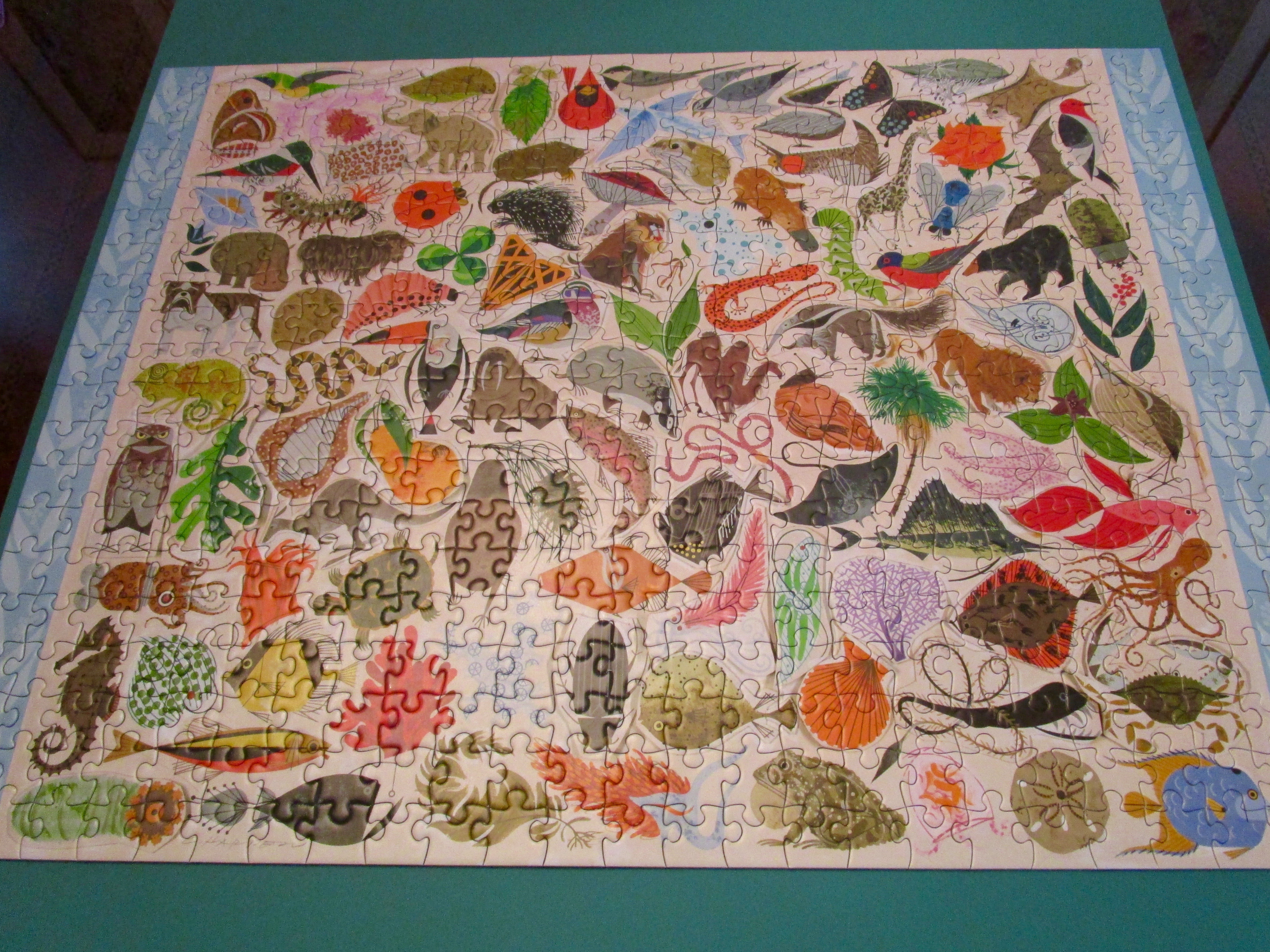 OCTOBERS JIGSAW PUZZLE: THE TREE OF LIFE BY CHARLEY HARPER (GUYLA, This is headed your way.)