“May, more than any other month of the year, wants us to feel most alive.” Fennel Huston 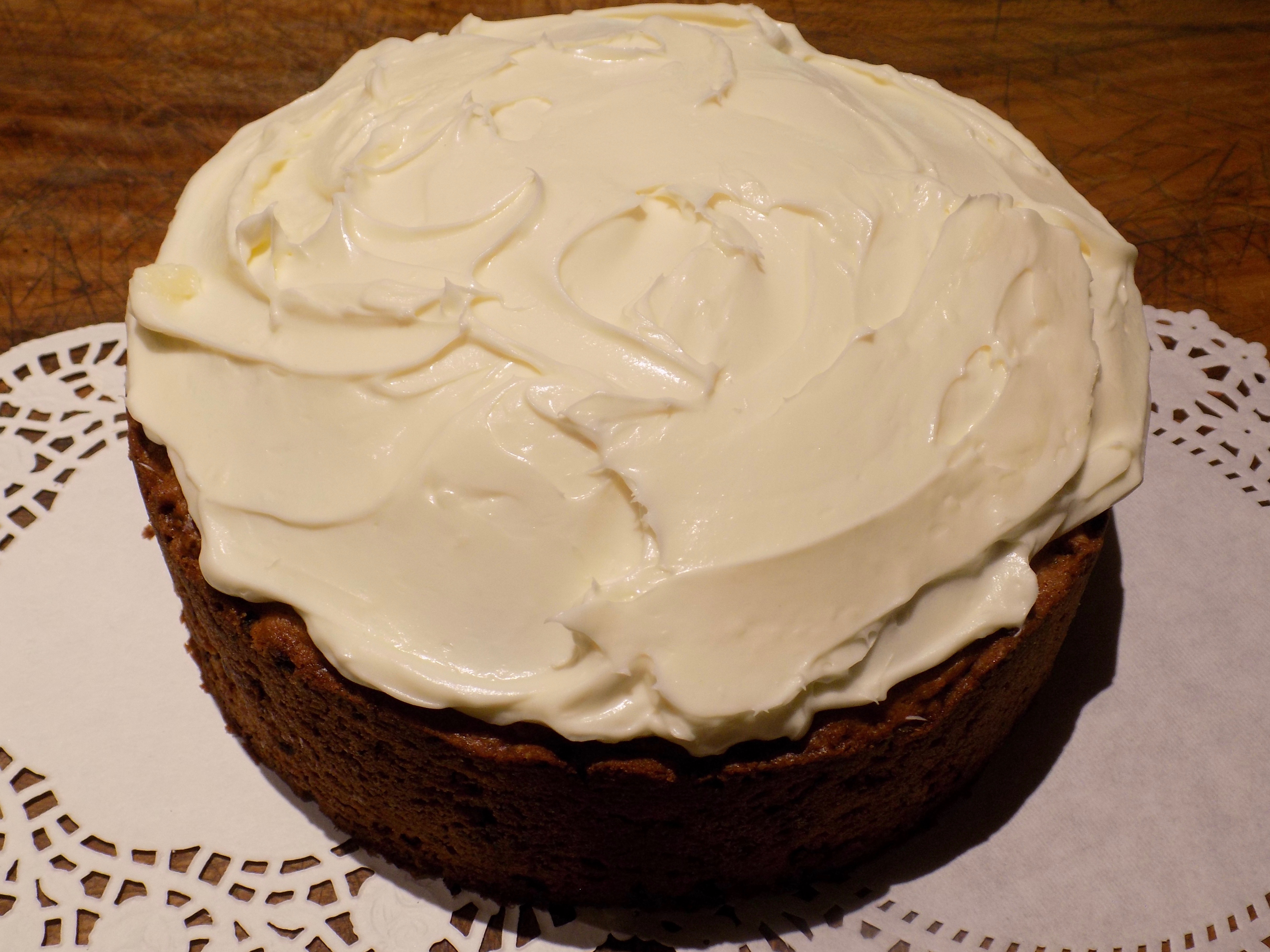 Today’s post is a full-on Happy Meal. I need that, don’t you? This week Mother Nature shot Springtime out of a cannon into the High Country. We went to bed in Winter and miraculously woke up to this glorious season of rebirth.

During winter our highway that winds from Aspen over Independence Pass is closed. Since this is the last week before it’s opening to traffic, a friend and I planned one last quiet hike up the Pass. We were not alone. This beautiful fox, carrying not one but two bagels, trotted by. A Papa, probably, but this fox was on a mission to reach the den. 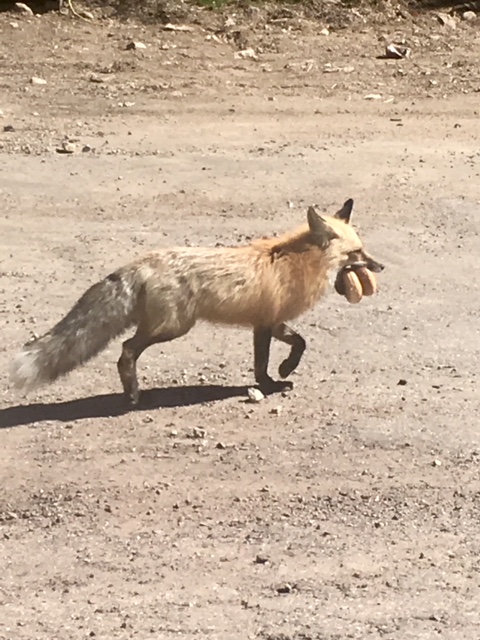 Every week I include one simple and delicious user-friendly recipe. Because I enjoy discovering new chefs (to me), using unfamiliar spices and trying unknown techniques, another post recipe may be more complicated. With my Cook-the-Book-Fridays group I’m cooking through David’s Lebovitz’s My Paris Kitchen. As a group, we commit to making every recipe in his cookbook. This week I covered all three bases. 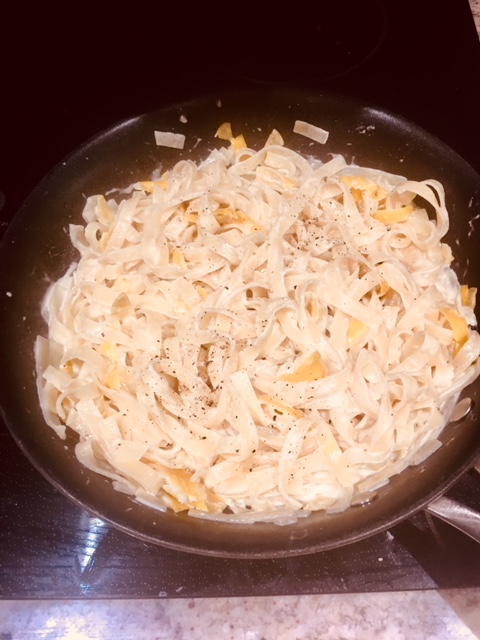 1) Throughout the summer I need quick supper recipes. I’m a volunteer USFS ranger again this summer. If Smokey still wants me, I’m In. On days that I “work,” I return home hungry and tired. (Make that starved and exhausted.) This week I pulled up Barbara Kafka’s Creamy Lemon Pasta recipe which she first introduced in a March, 1999 New York Times column, Secrets of a Lemon Lover In a Season of Plenty. Almost 20 years later Food52 website considers it a Genius Recipe. 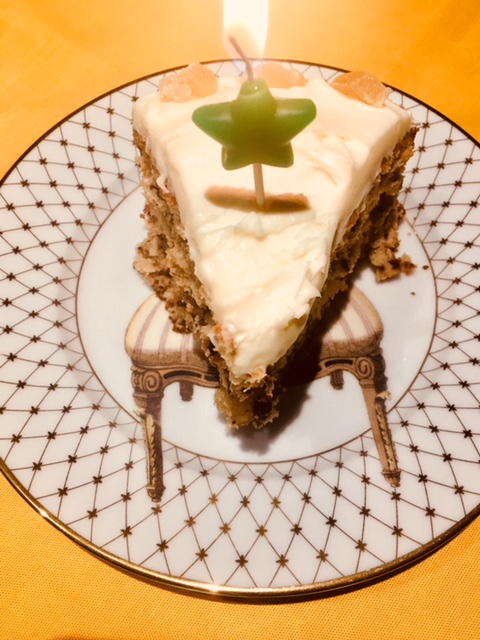 2) It was my Clara’s 15th birthday this week. Although I wasn’t in California for the family celebration, I still could make merry by baking Yotam Ottolenghi’s Beet, Ginger and Sour Cream Cake. I poured a glass of champagne, toasted my precious youngest granddaughter and discovered beets and bubbly bond beautifully. 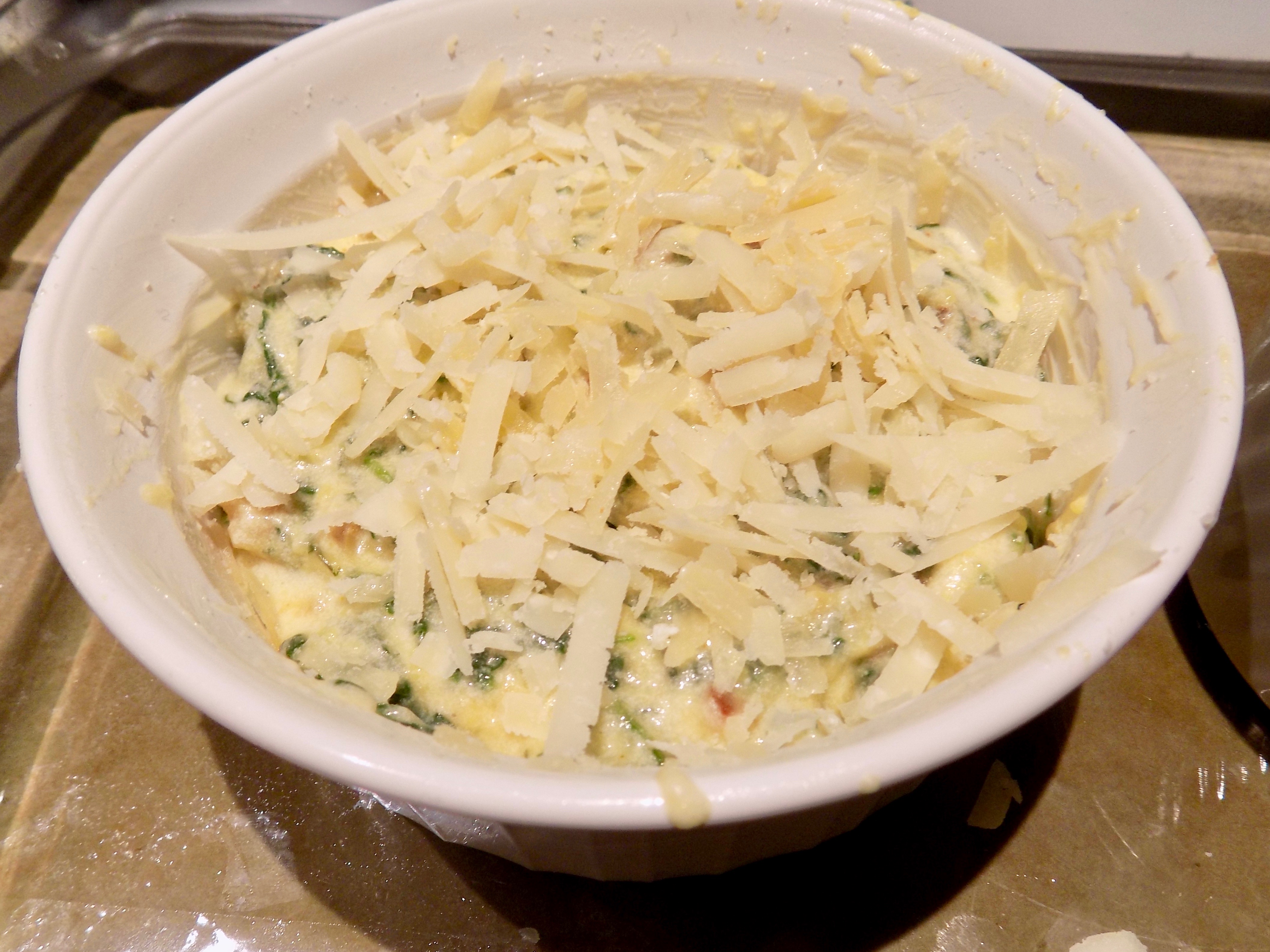 Ready for the oven…

3) This week’s Cook-the-Book-Fridays recipe choice is David Lebovitz’s tasty Cheese, Bacon and Arugula Soufflé. Loyal Readers, may I be blunt? Some recipes, like Bûche de Noël, Turdunken and Baked Alaska, should be left to the pros. While this soufflé doesn’t rise to the difficulty of these examples, it is complicated, labor-intensive and high altitude-resistant. 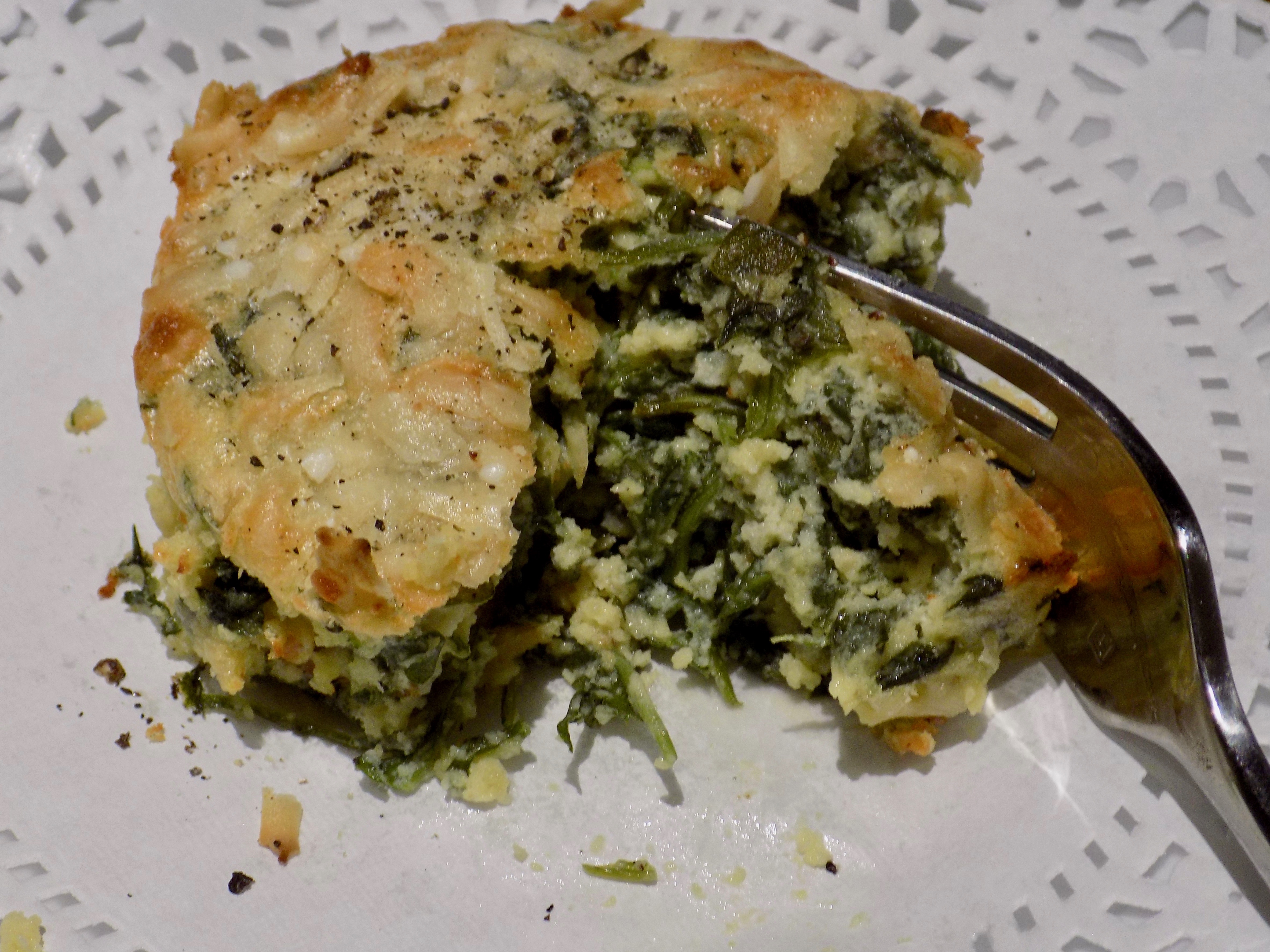 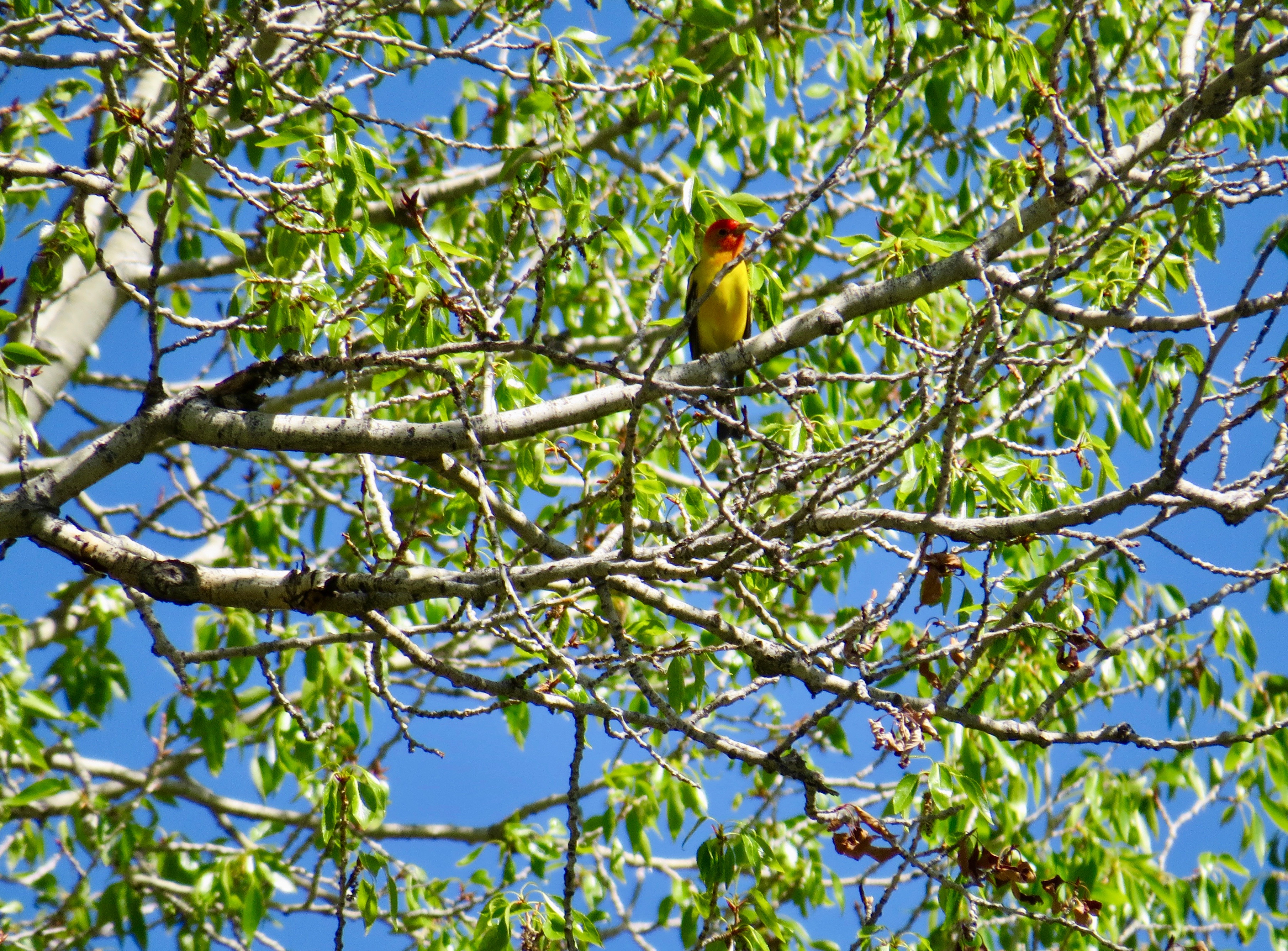 I went birding with another ranger yesterday. It was a gorgeous, sunny morning and we were reminded how totally amazing these winged creatures are. Yellow warblers are migrating back from Central and northern South America. Hummers are flying in from Mexico. The Great Blue Herons are back in residence at the North Star Preserve and Rock Bottom Ranch and a pair of ospreys have returned to their traditional nesting site near the Rio Grande Trail in mid-valley. 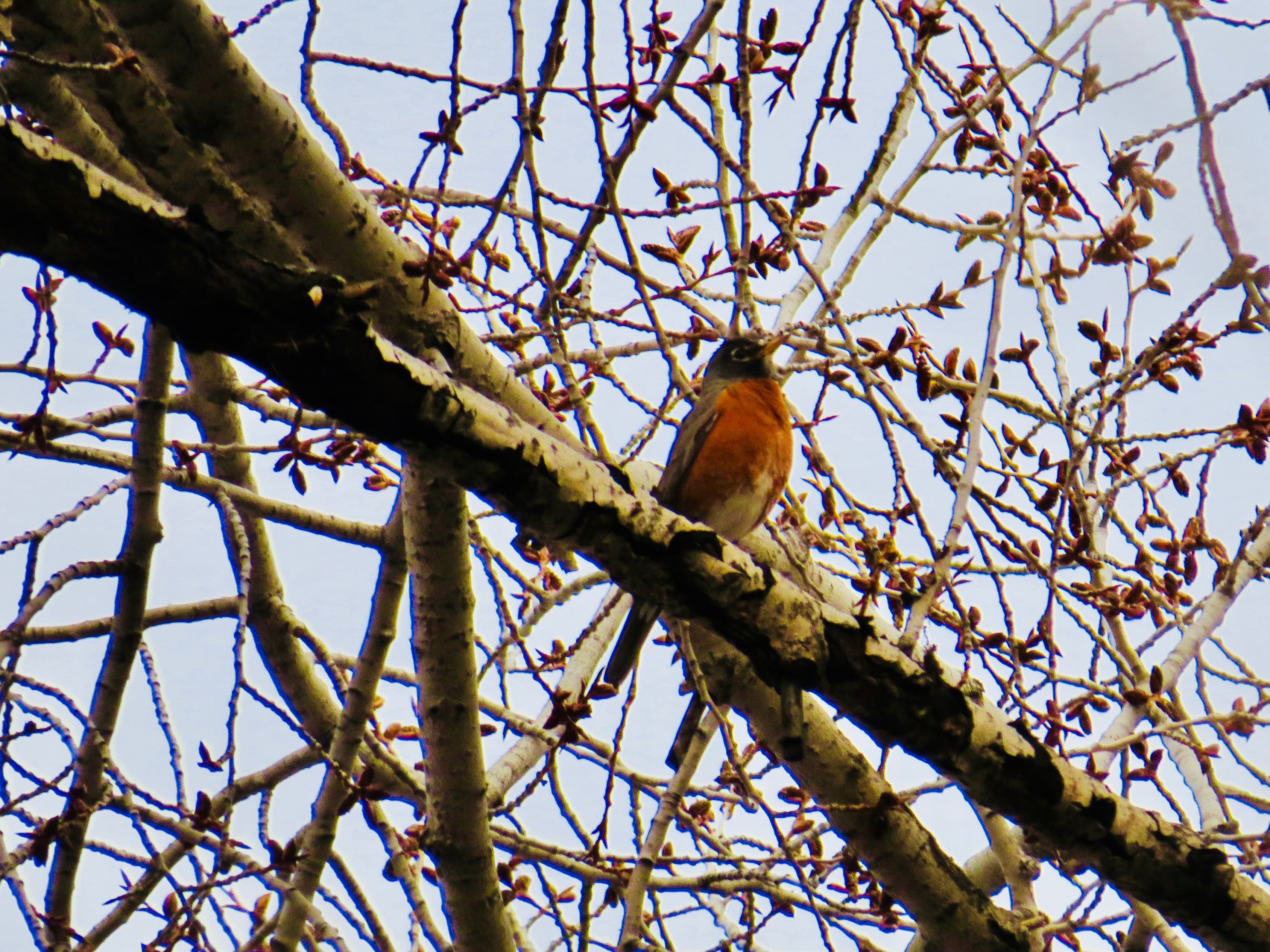 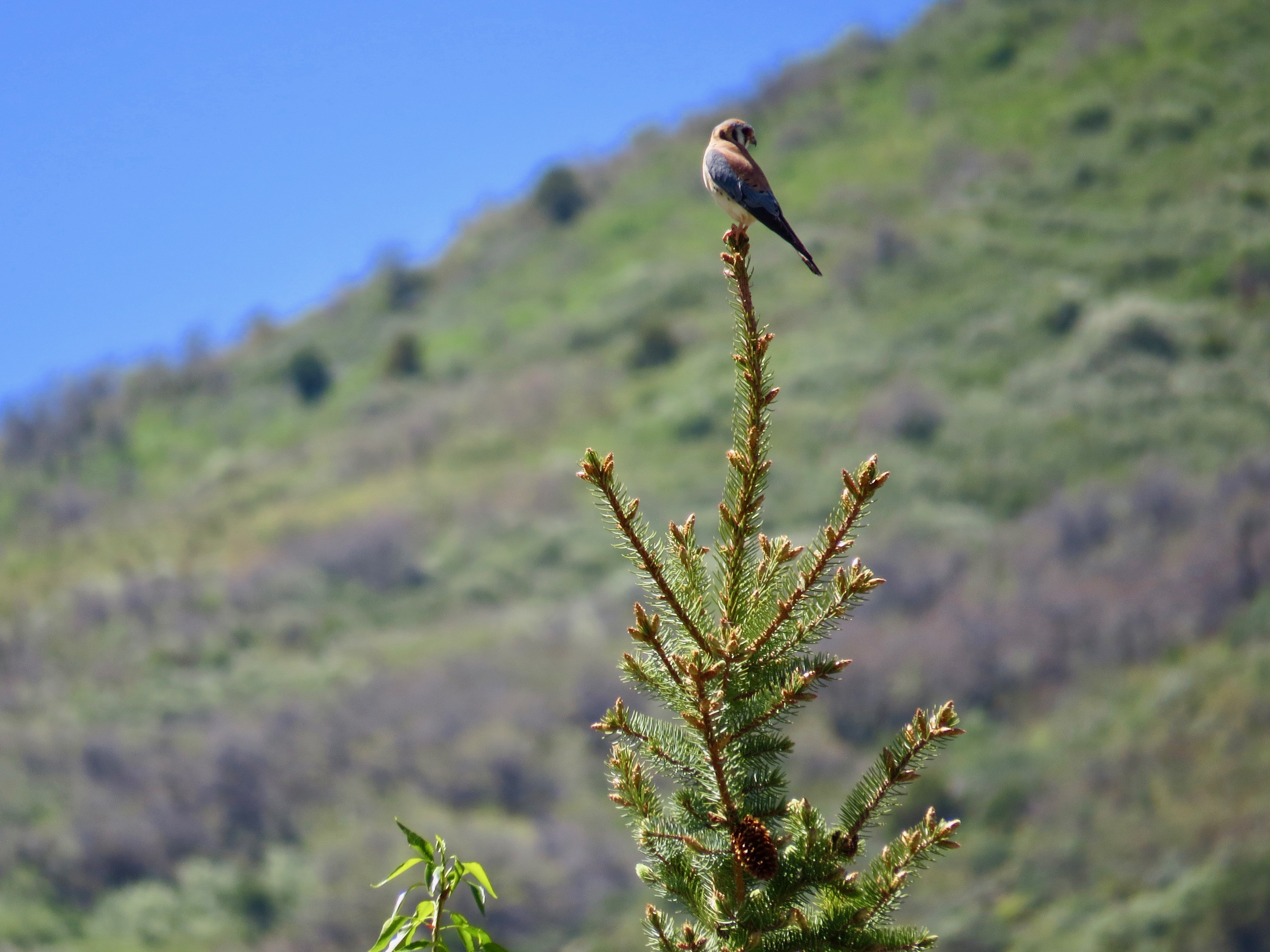 There was drama of the fowl kind in California today also. My daughter, Melissa, like her mother, is an early riser. This morning she discovered an injured adult finch on their front walkway. Although Clara did not inherit the early-riser gene, she is an intern at Wildcare Eastern Sierra and always “on call.” 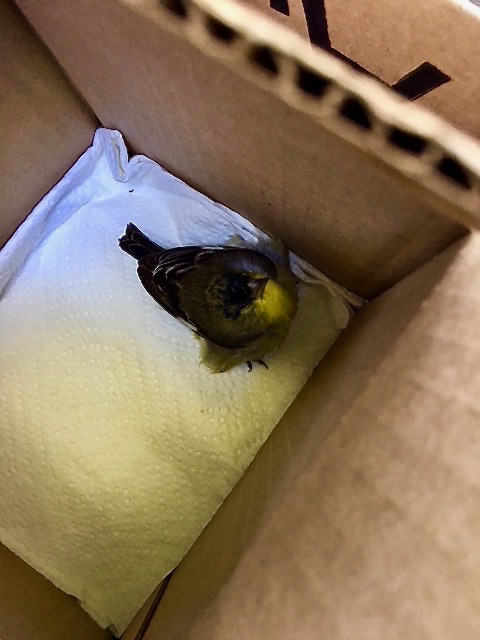 “Help me,” says the frightened finch. 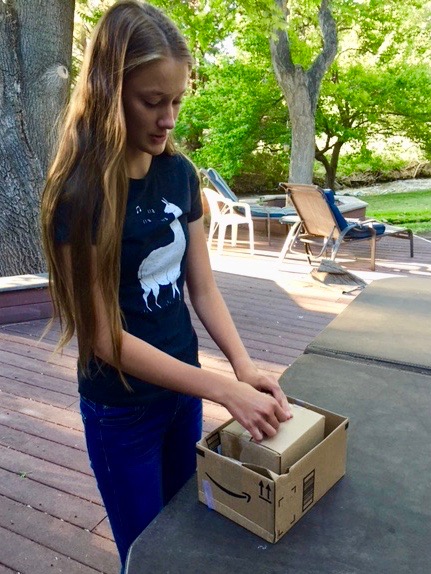 The lucky baby received Clara Care until they dropped it at the sanctuary before school. Our worldwide bird population, a ‘vital gauge of our ecosystem’s health’ is in peril. The Trump administration is also rapidly rolling back environmental laws and protections for all migratory and endangered birds. Proud of my family. Every feathered friend is worth saving. 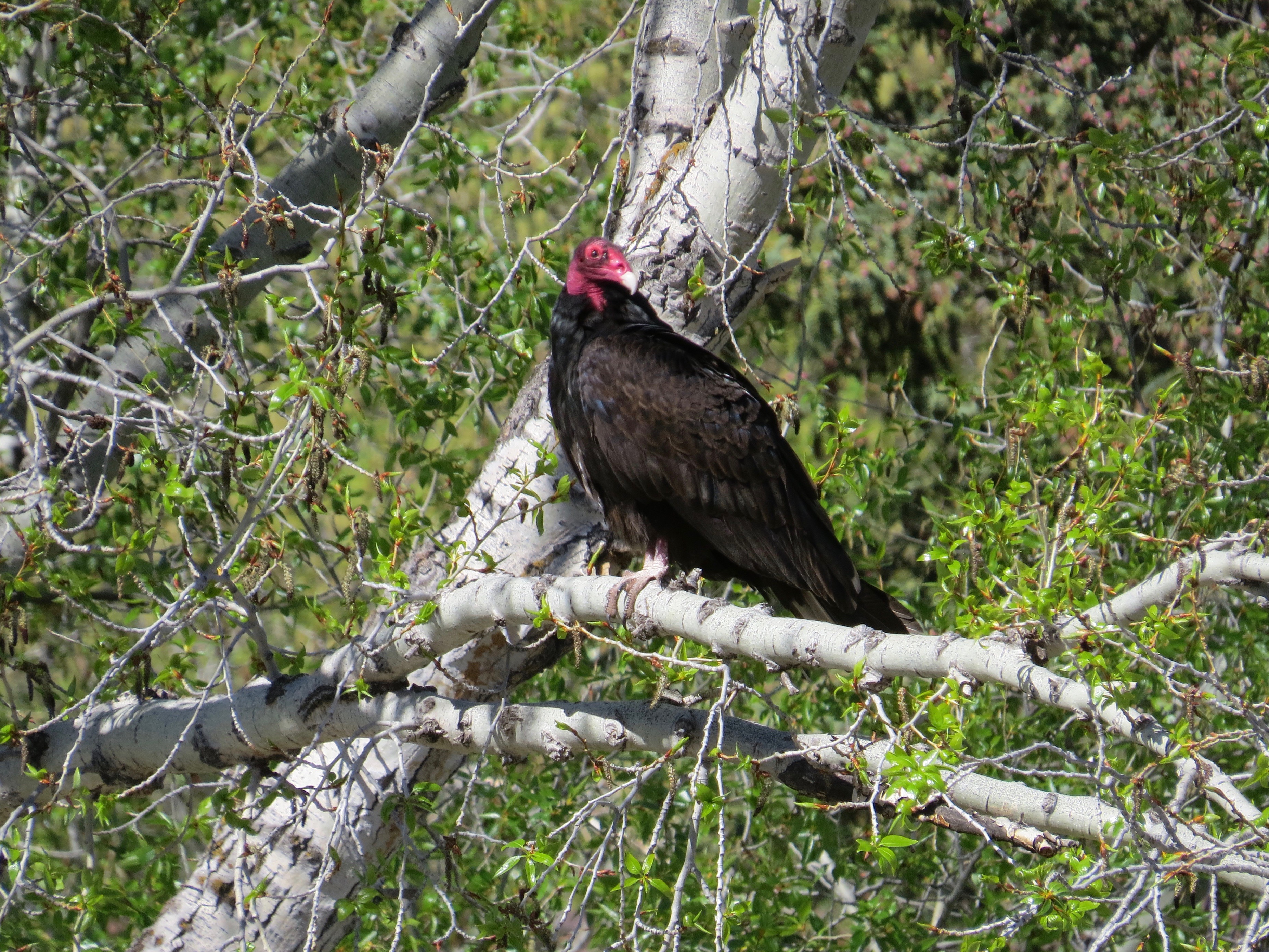 We don’t see many Turkey Vultures in the area except in flight. This guy, who was just hanging out on a low branch, startled us as we walked by. 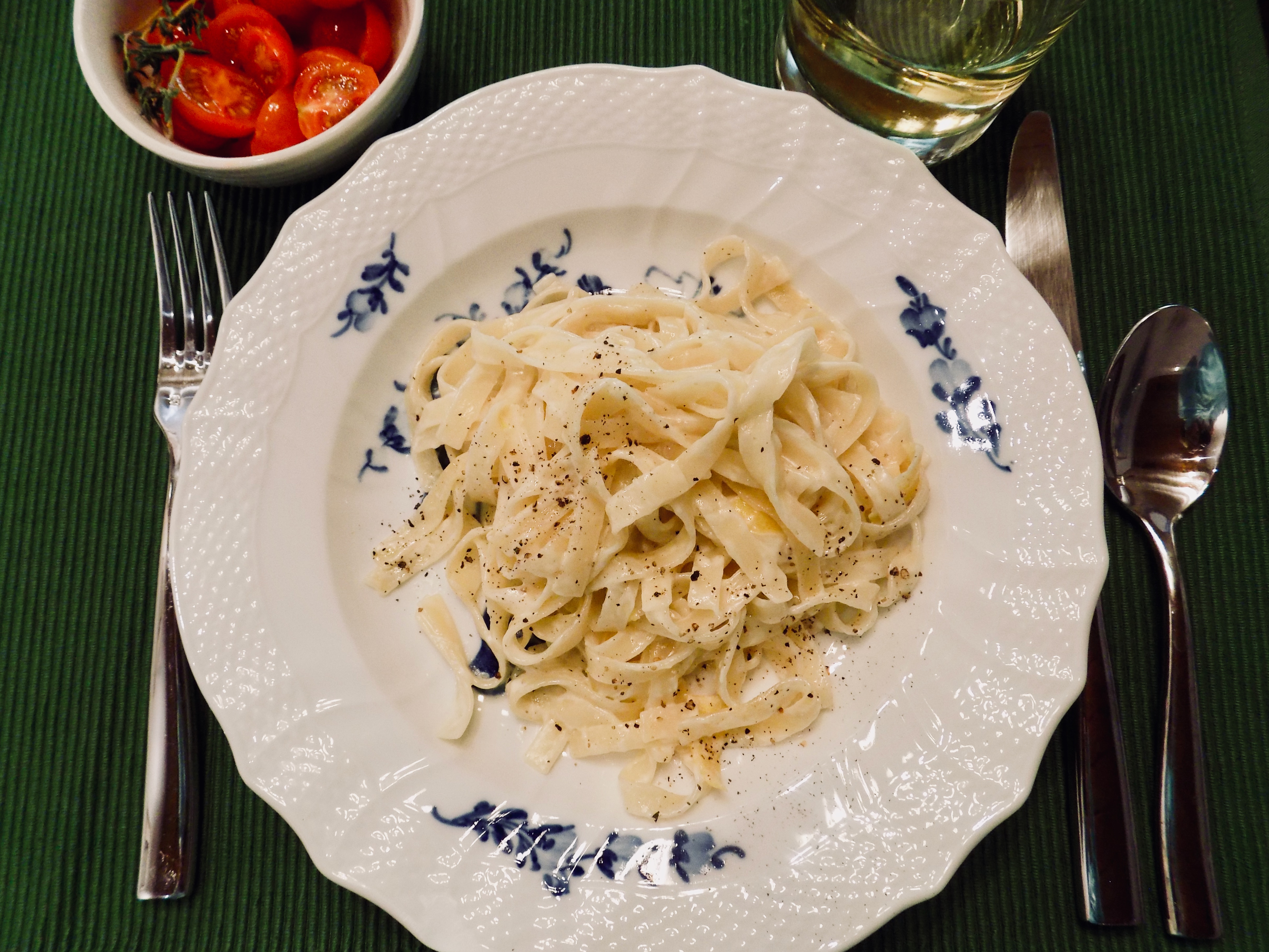 1. Bring a large pot of salted water to a boil. Add noodles and stir to separate. Cook for 8 minutes or until tender. Drain, then return to the cooking pot.

2. Just before noodles are done, combine the lemon zest, cream, salt and pepper in a small saucepan. Cook over medium heat for 2 minutes or until cream comes to a boil.

3. Pour cream mixture over drained noodles and add the lemon juice. Stir to coat. Cook over medium heat, stirring 1 or 2 minutes until all the liquid is absorbed. Season with additional pepper, if desired.

1. Start by using 3 TBSP of lemon juice and add more to taste;

2. The variations and add-ins to this pasta dish are numerous: green veggies (peas, of course); mushrooms; kalamata olives; onions; chicken, sausage or tuna. Or, use the pasta as a small side with steak, shrimp or white fish. 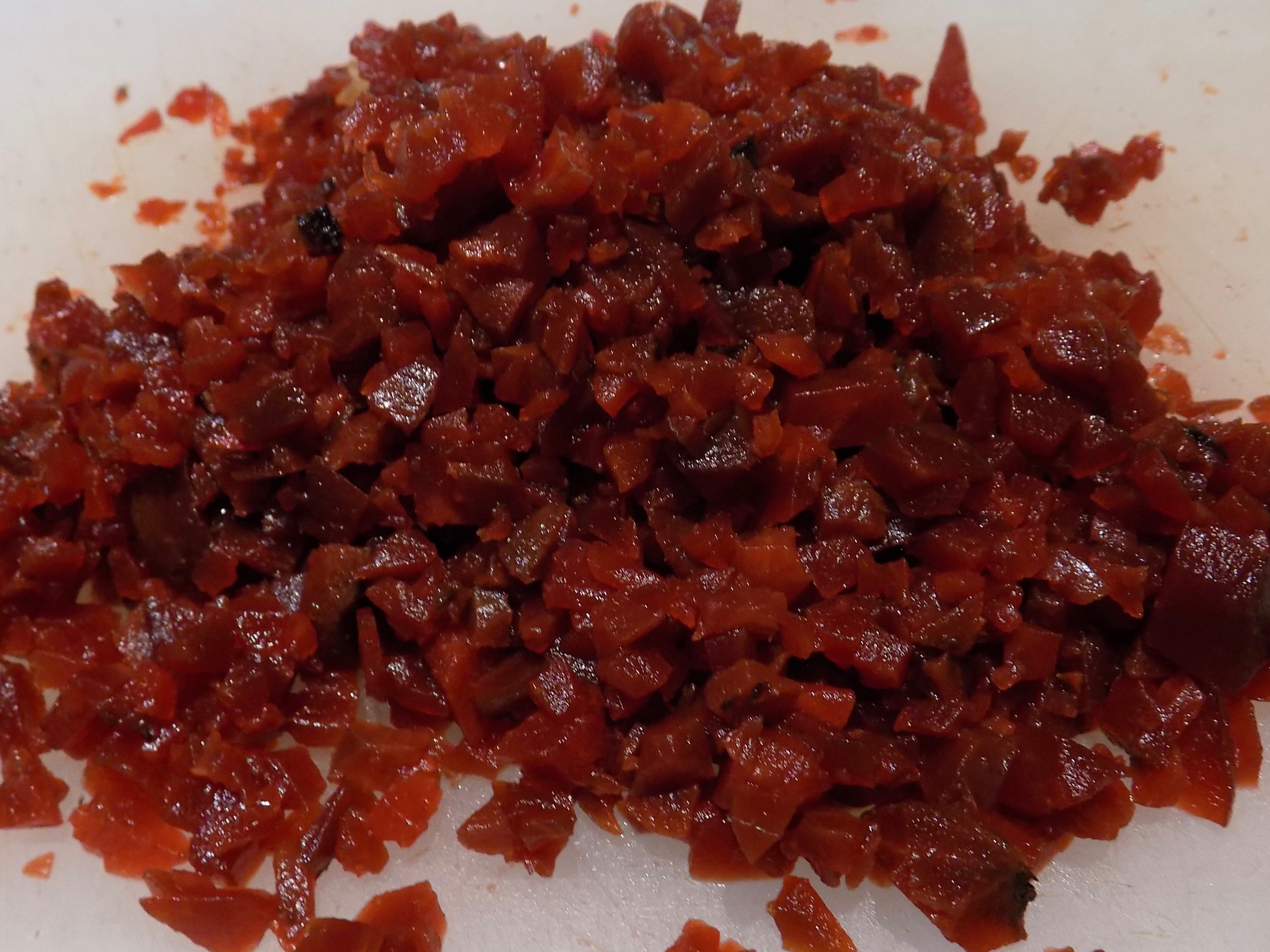 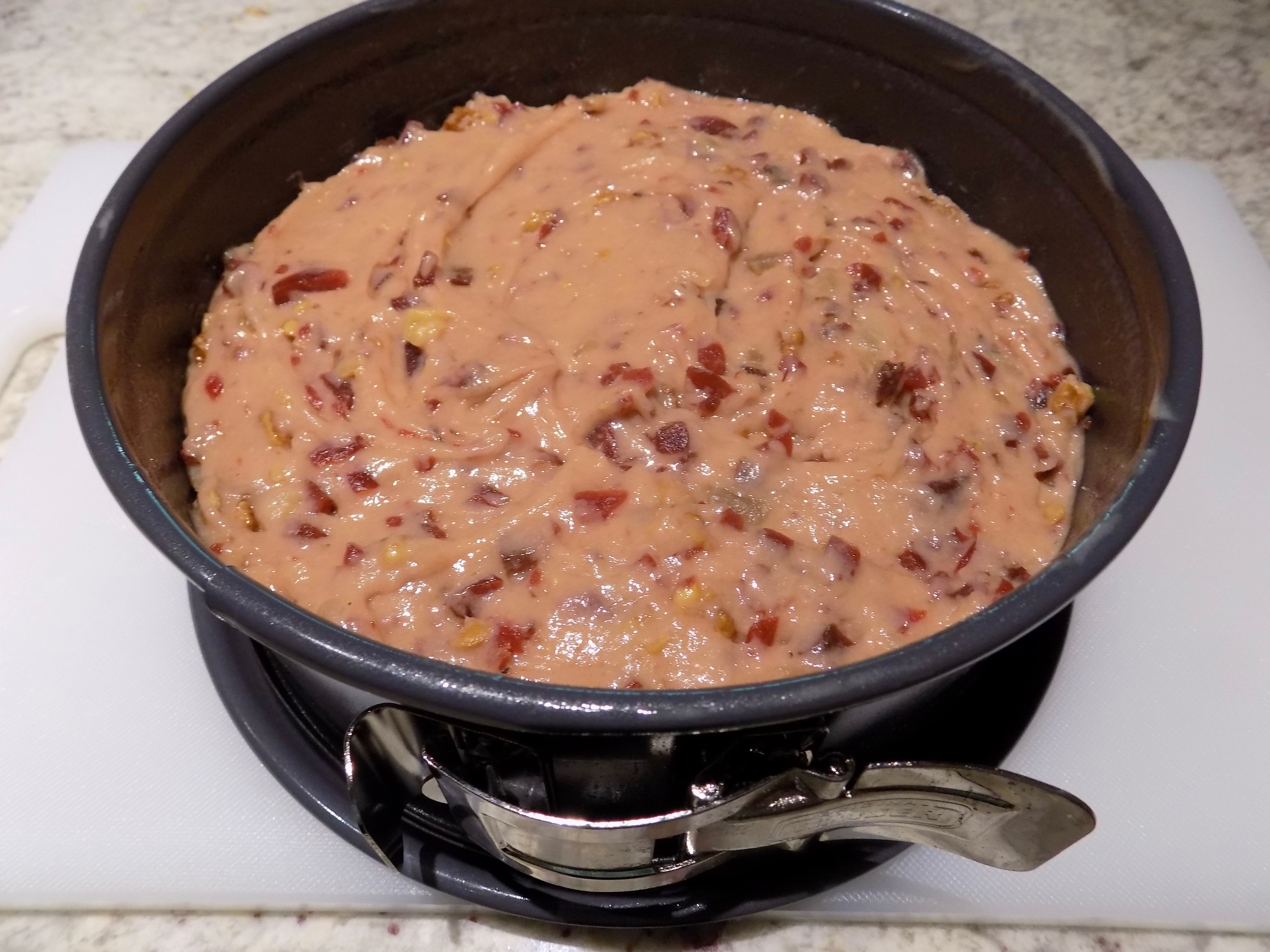 The cake is ready for the oven. I used an 8-inch springform pan but an 8″ round or square pan works also.

David Lebovitz wrote a wonderful post about baking this cake. Get the recipe and see his comments here.