After 25 years of carrying a burden of veggie guilt, this week’s recipe, Baby Bok Choy, Sugar Snaps, and Garlic en Papillote, provided the opportunity to set things right. Having grown up in Iowa, I enjoyed the bounty of our family garden in the summer but winter vegetables were compliments of Bird’s Eye, the Jolly Green Giant and Del Monte. 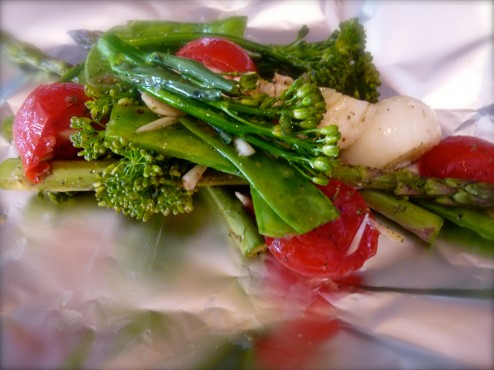 Vegetables, seasoned and tossed in olive oil, sitting in their tinfoil home, ready to be wrapped.

Unfortunately, I never jumped on the veggie bandwagon. Throughout many years of entertaining, welcoming friends to the table, the vegetables I served were always an afterthought. That changed when I inadvertently invited Susan, who was a Vegetarian, to break bread at Chez Hirsch.   Please understand 25 years ago there were very few vegetarians living in America’s heartland. Michael and I had been married 2 years. In the spirit of full disclosure, Susan and her husband, Steve, were his Des Moines friends who had become mine. Until four days before the above-mentioned dinner party, I didn’t know Susan’s dietary preferences. 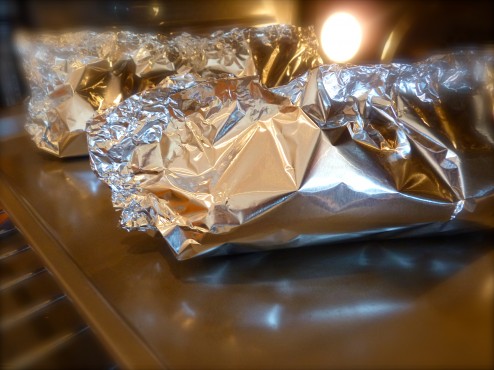 Wrap the veggies loosely in their packets, leaving a small opening for steam.

After learning that tidbit from I-don’t remember-who, my downward spiral into tizzy-dom was instant. Everything on my entire menu possessed the taint of no-no’s. Later that day, when I ran into her at the drug store, I said, with a smile, “You know, Susan, you’re a real pain in the neck.”

To her credit she laughed. “Don’t worry about it, Mary, I’ll bring something. I’ll be fine.”

Yes, Readers, I still cringe at that memory. Whether said with a smile or a snarl, it was an unkind remark on several levels. Susan and Steve continued to be dearest of friends and eventually also moved to Aspen. I couldn’t have muddled through the past ten years without them. But I am still groveling and asking forgiveness over something Susan hardly remembers.

Now that I’ve laid myself bare to the world, I feel better. Whew. Case closed. 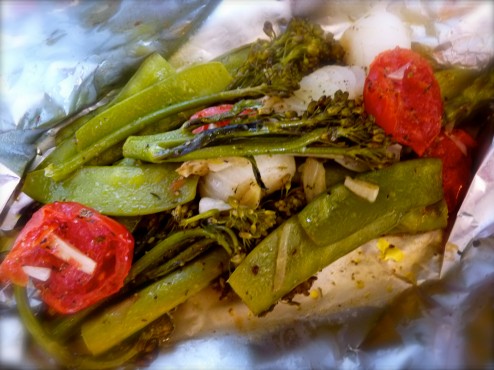 Ready to serve, in packets, to your guests.

Admittedly, I’ve learn the most from Life’s missteps. Quite soon after that dinner party, I smartened up and vegetables became a food group in my kitchen. My education started with Mollie Katzen’s The Moosewood Cookbook: Recipes from Moosewood Restaurant, followed quickly by Moosewood Restaurant Cooks at Home: Fast and Easy Recipes for Any Day. In 1997 I met Deborah Madison. Her cookbook, Vegetarian Cooking for Everyone, weighed 4-pounds. There was more knowledge to-the-ounce crammed into that book than I can ever learn. 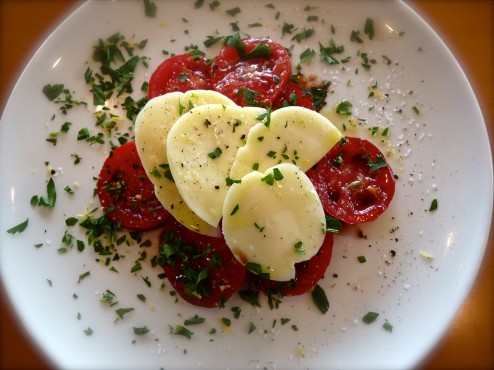 My Caprese Salad, with fresh ingredients from the Cambria farmers market. 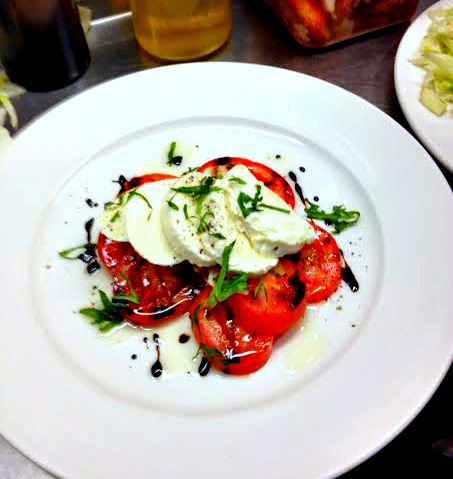 Caprese Salad by Chef Sean, the brother of my FFWD colleague, Teresa McCarthy

At French Fridays we’ve already featured more than 20 of the 25-or-so vegetable recipes featured in Around my French Table. As I recall, most received a thumbs up. That’s exactly how I feel about this week’s very delicious medley of Baby Bok Choy, Sugar Snaps and Garlic en Papillote. There was no baby bok choy in Cambria’s farmer market so I substituted broccoli rabe. To clean out my fridge before leaving California, I tossed in asparagus and cherry tomatoes. Although En papillote means food cooked in a paper wrapper, Dorie suggests tin foil for this veggie packet. 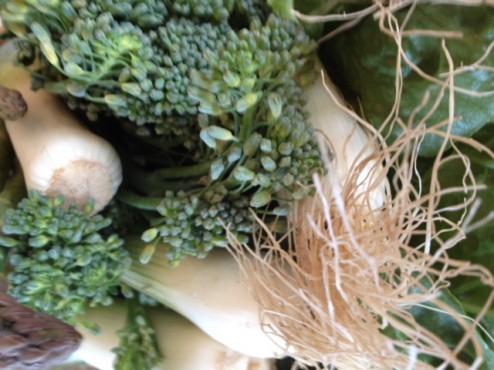 I’ve just pointed out the genius of Dorie and her cookbooks. She gives you a recipe and technique which she has tweaked, expecting you, the home cook, to do the same. After 3 years of French Fridays, watching my Dorista colleagues cleverly put their own variations to hers, I’m trying to move from my by-the-book inclinations. Not going all crazy, just scooting out on that limb in my think-it-over-carefully sort of way.

Her technique, of course, was steaming. Her secret tweak, along with olive oil, was the seasoning. Mint. Orange zest. Salt and pepper. Added also, lotsa baby white onions. Mmmmmm, it was good. Easy to throw together. Served next to a delicious Caprese salad, inspired by colleague Teresa McCarthy’s brother, I had a meal. Leftovers became the inside of next day’s frittata. 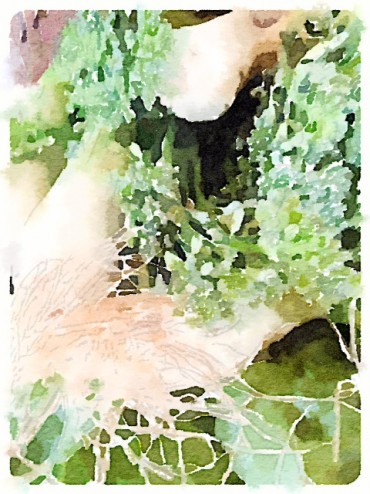 The same picture as above manipulated by the Waterlogue App on my iPhone. (Thanks, Tricia)

French Fridays with Dorie is an international cooking group working its way through Dorie Greenspan’s Around my French Table. The recipe for this veggie packet is here. To see my colleagues’ bounty this week, check out our FFWD site. For those of you celebrating Easter, have a wonderful week-end with your family and friends. 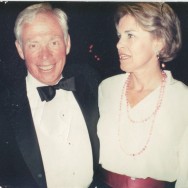