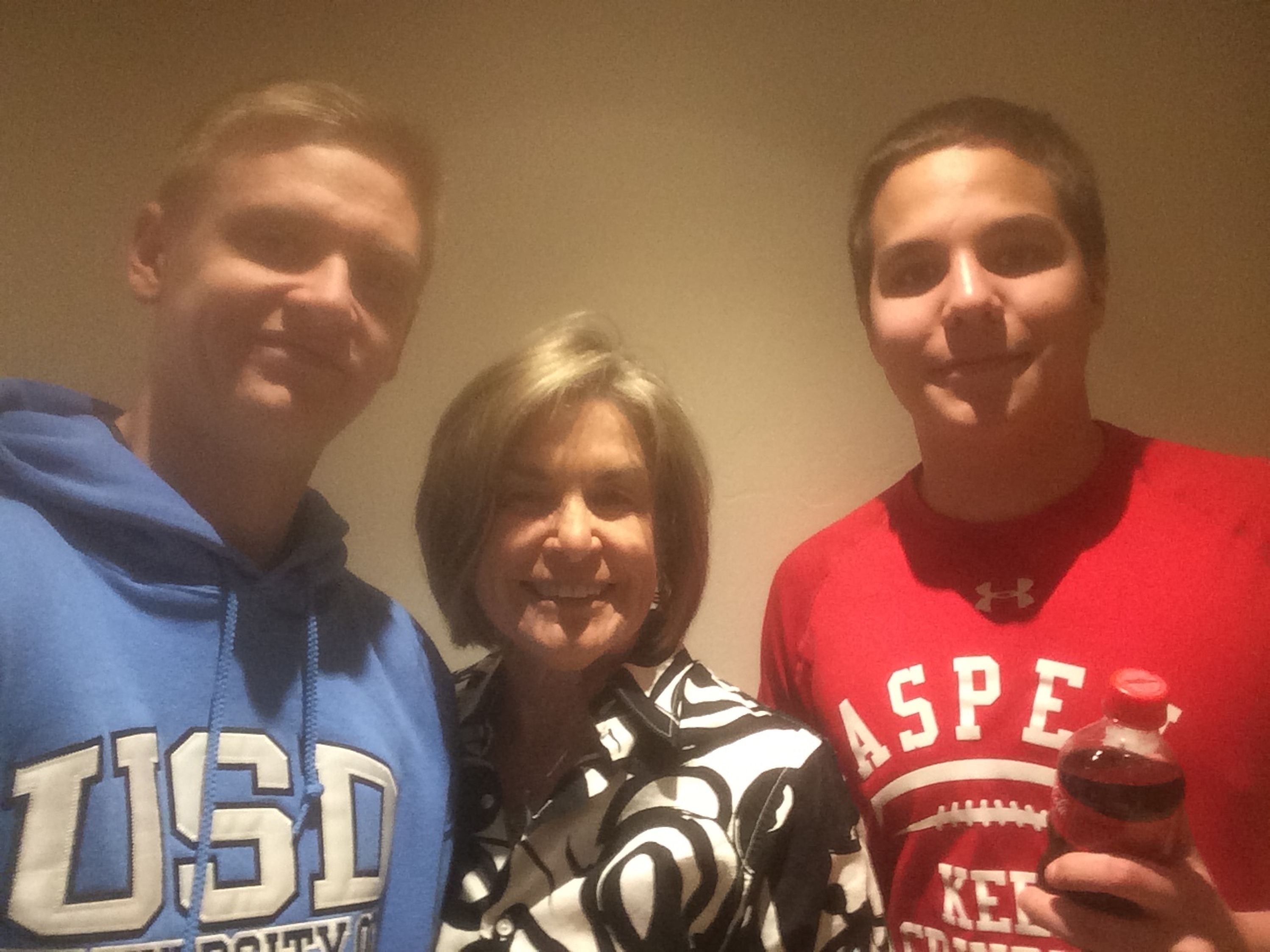 For today’s purposes, we are the Revolutionaries. Dominick (l), Mary, Cavanaugh(r). Selfie by Dom

“Cooking is, without a doubt, one of the most important skills a person can ever learn. Once someone has that knowledge, that’s it – they’re set for life”. Chef Jamie Oliver 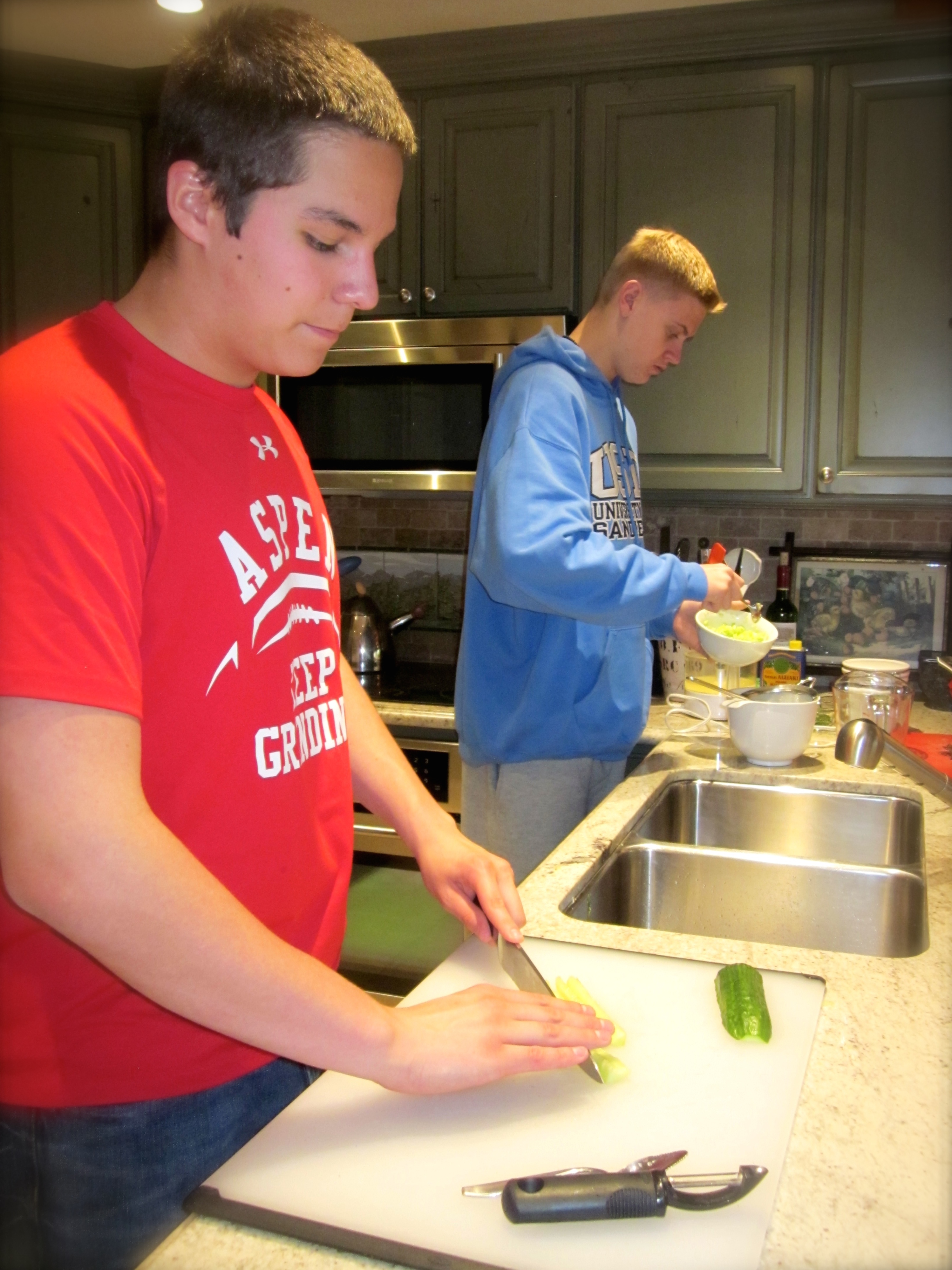 Although Dom is draining moisture from the cucumbers, Cav decided we needed more cubed cukes.

This week we Doristas pulled out our chopping blocks, sharpened our knifes and picked up our whisks. It’s Jamie Oliver’s third annual Food Revolution Day and, once again, French Fridays with Dorie is here to do battle. Last year’s theme, with teachers and foodies in 74 countries participating, was Cook It & Share It. This year we were asked to “cook with kids and get them excited about food.” 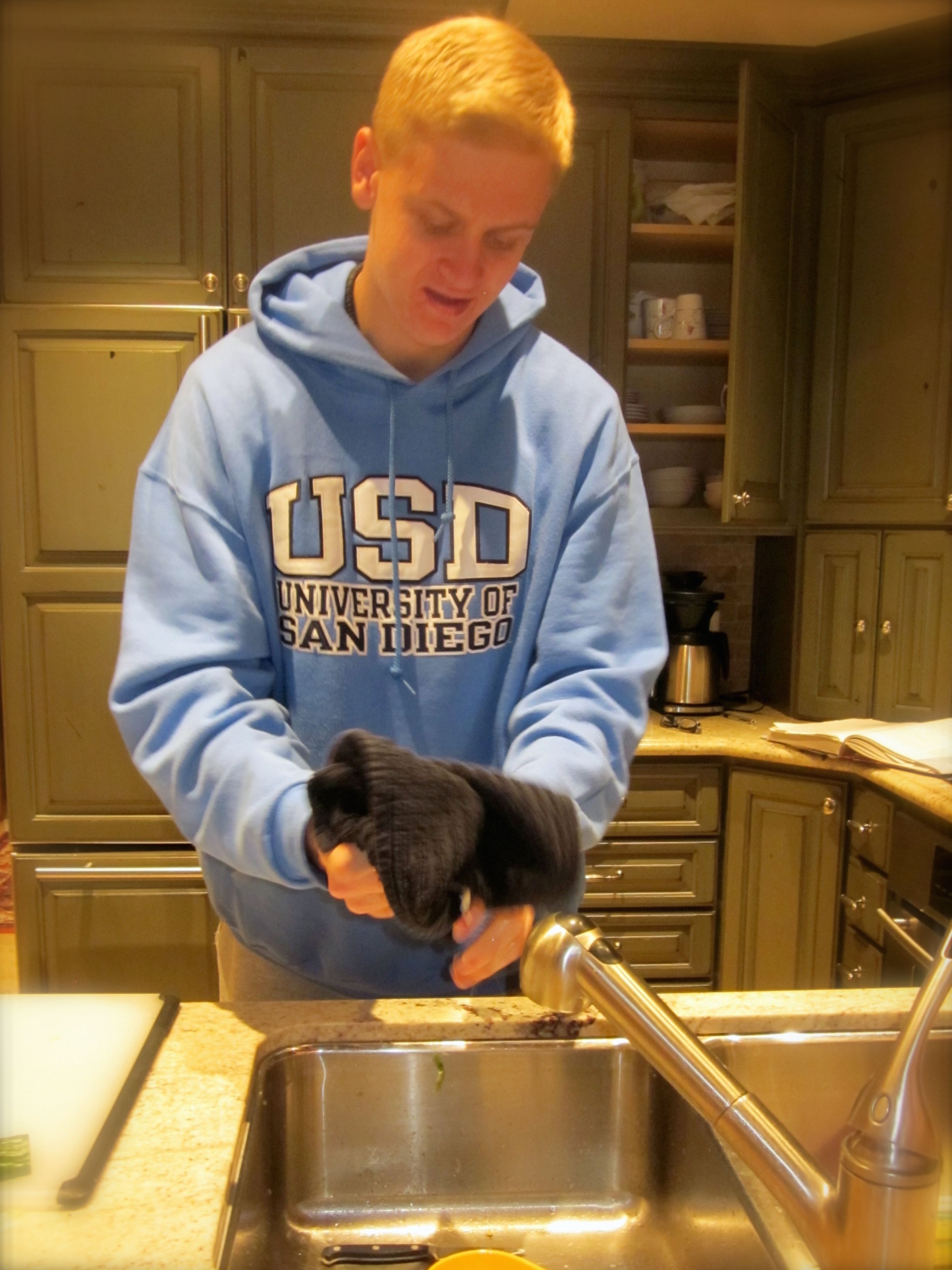 Dom is drying the cucumbers by twisting them in a dish cloth and squeezing. He found this very strange.

I asked my neighbor, Cavanaugh, a 17-year-old junior at Aspen High School, to cook with me. Although Cav is now into football, college interviews and getting fit in his tux for this month’s prom, I’ve known him since he was a little boy fixated on StarWars. 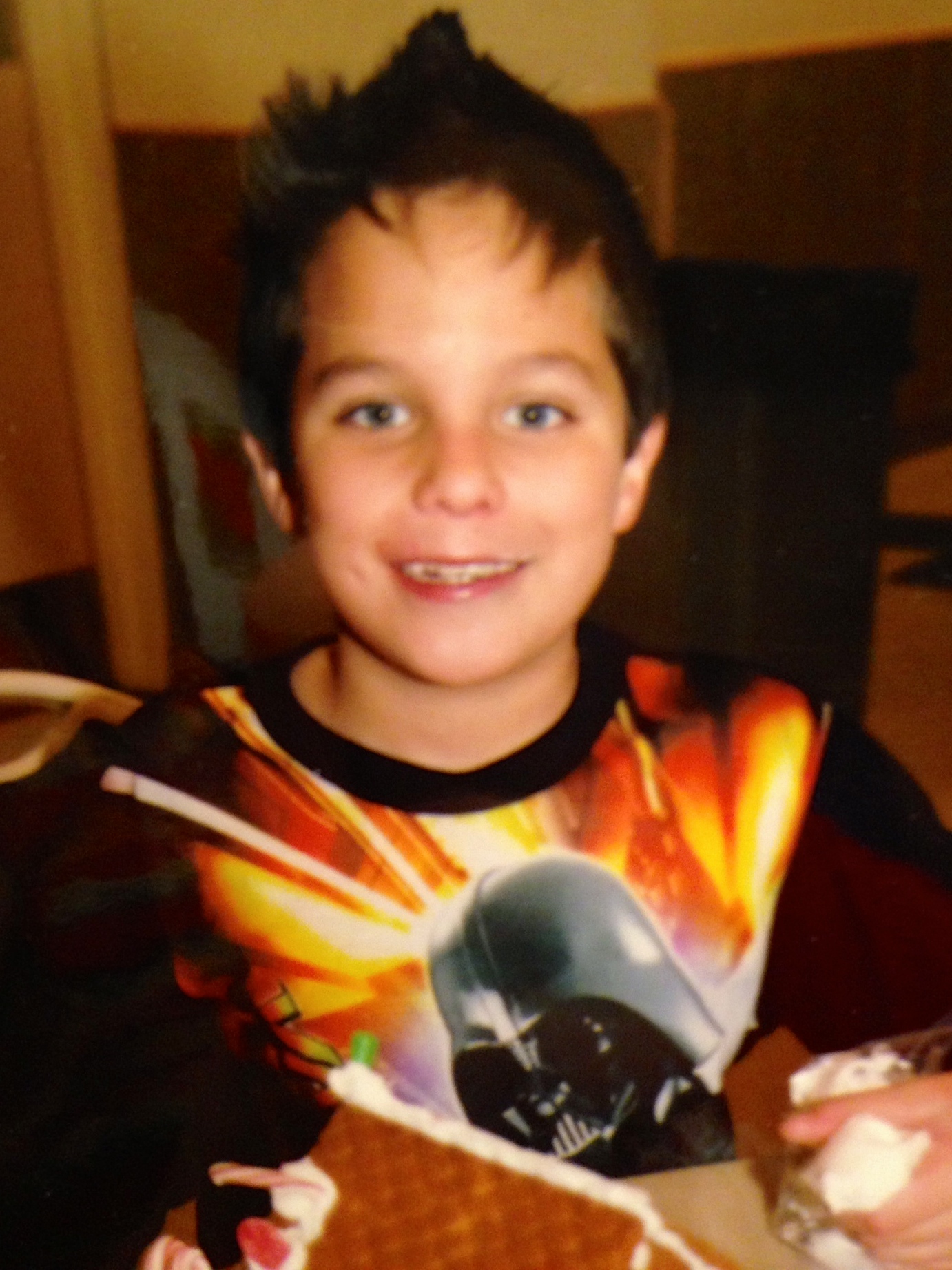 Yes, Cav is going to be unhappy with his mother for sharing this picture with me but he was such a cute little boy.

Last Christmas I was at City Market when Cav and his pal, Dominick, were grocery shopping. Their cart was piled to overflowing with snacks. Chips, crackers, dips and spreads, cookies, Coca Cola, candy – nothing nutritious. “Hi, Cav,” I said, “ what’s all this?” 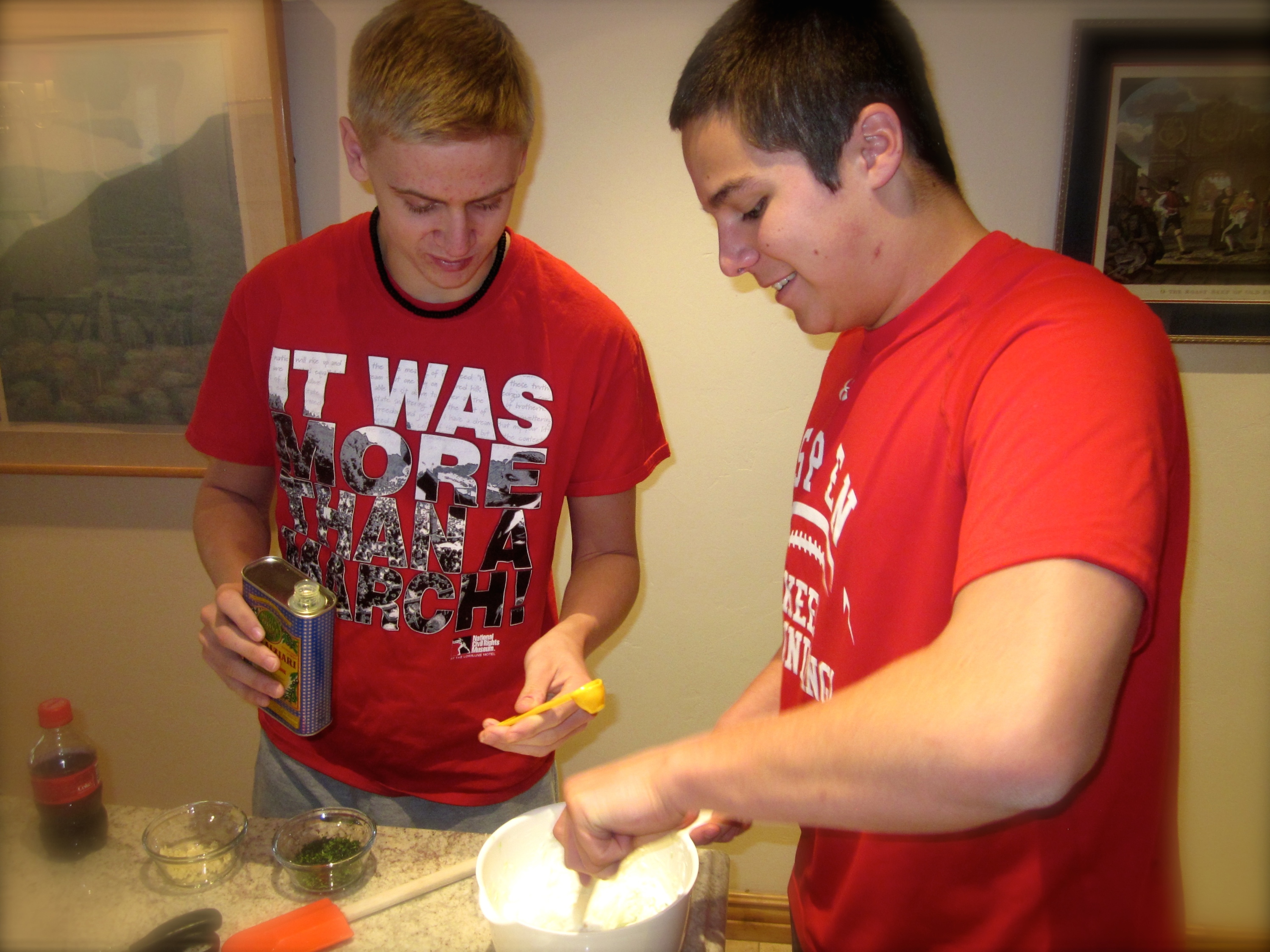 Adding all the Tzatziki ingredients to the Greek yogurt mixture

“Oh, hello, Mrs. Hirsch,” he replied. “We’re just stocking up for the rest of the holidays.” 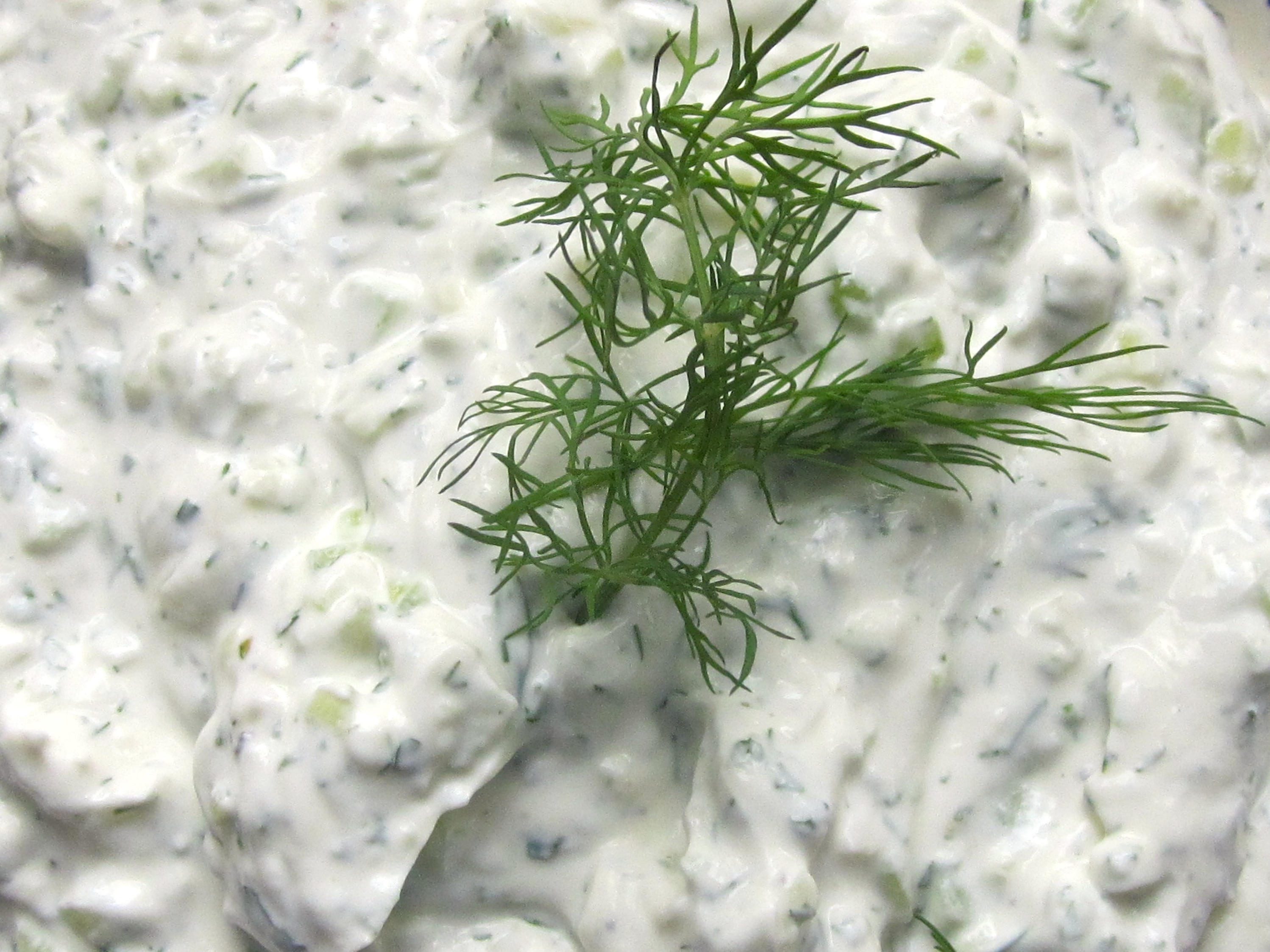 We put the finished Tzatziki in the fridge so the flavors could blend together well.

When I returned home from the store, still amused, I did what any respectable pseudo-Grandmother would do, I called his Mother. “Blanca, I just saw Cav and his friends at the grocery store,” I reported. “They were loading up for the rest of the school break and absolutely nothing was nutritious.” 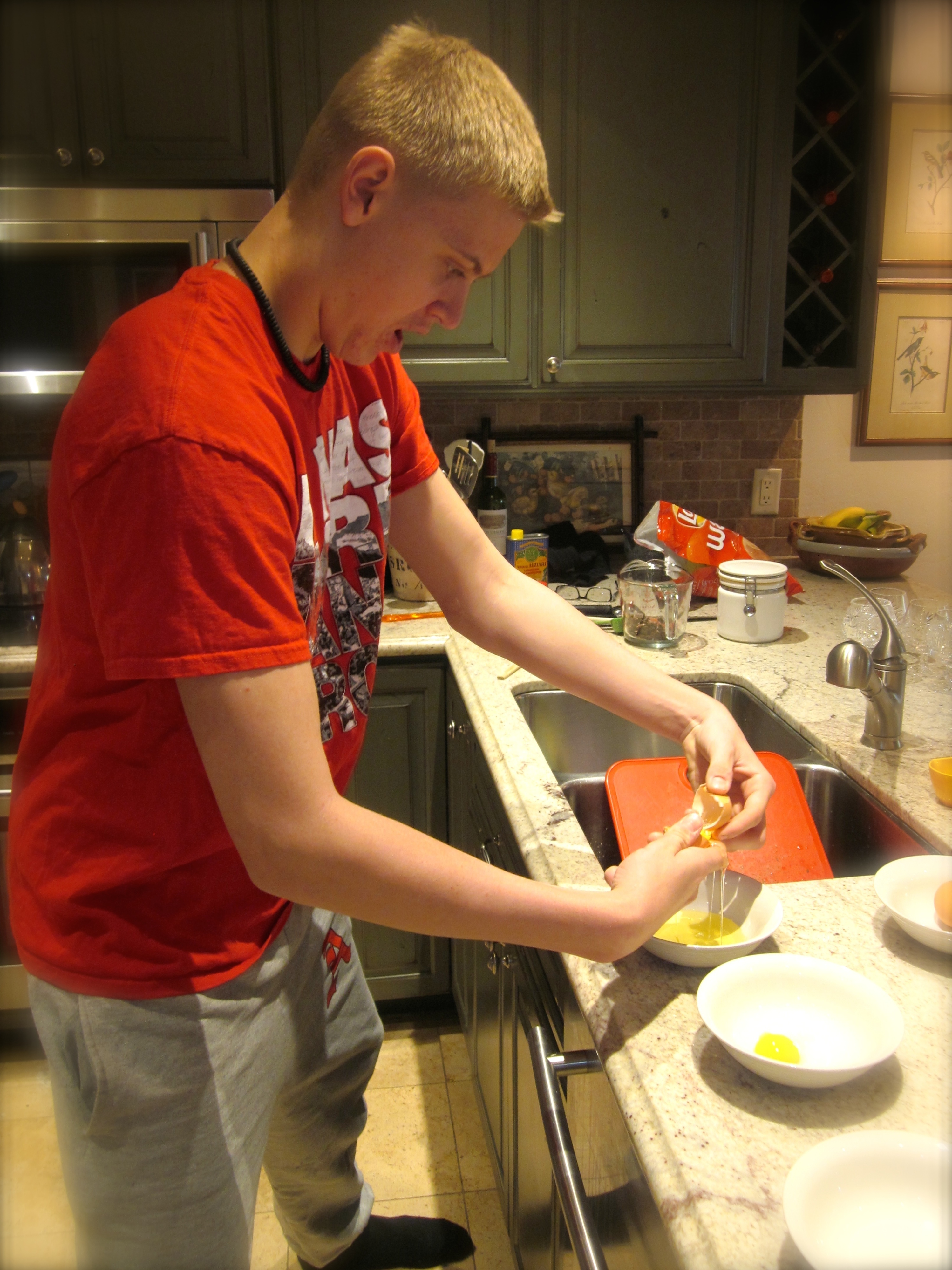 Dom separates the yolk from the egg whites for the chocolate mousse.

After hanging up, Blanca went flying down the stairs to the rec room where the boys were unloading their groceries into the snack cupboards and fridge. “Mrs. Hirsch just called and says you didn’t buy anything nutritious.” 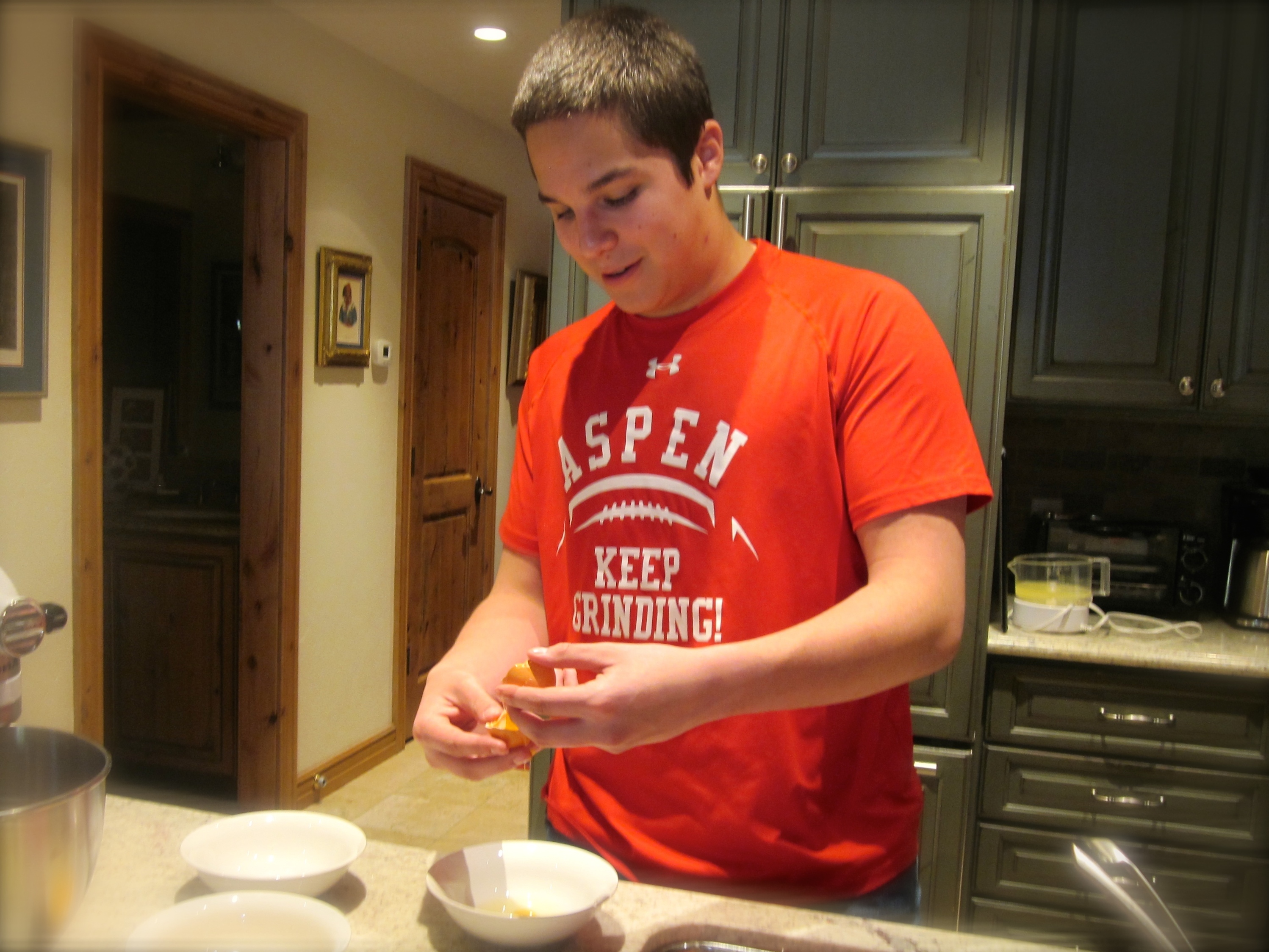 Now Cav separates the yolk from the egg whites. (I will admit to a little gentle trash talk going on here.)

I soon received a text from the boys. “Yes, we did, Mrs. Hirsch. We bought bacon!” 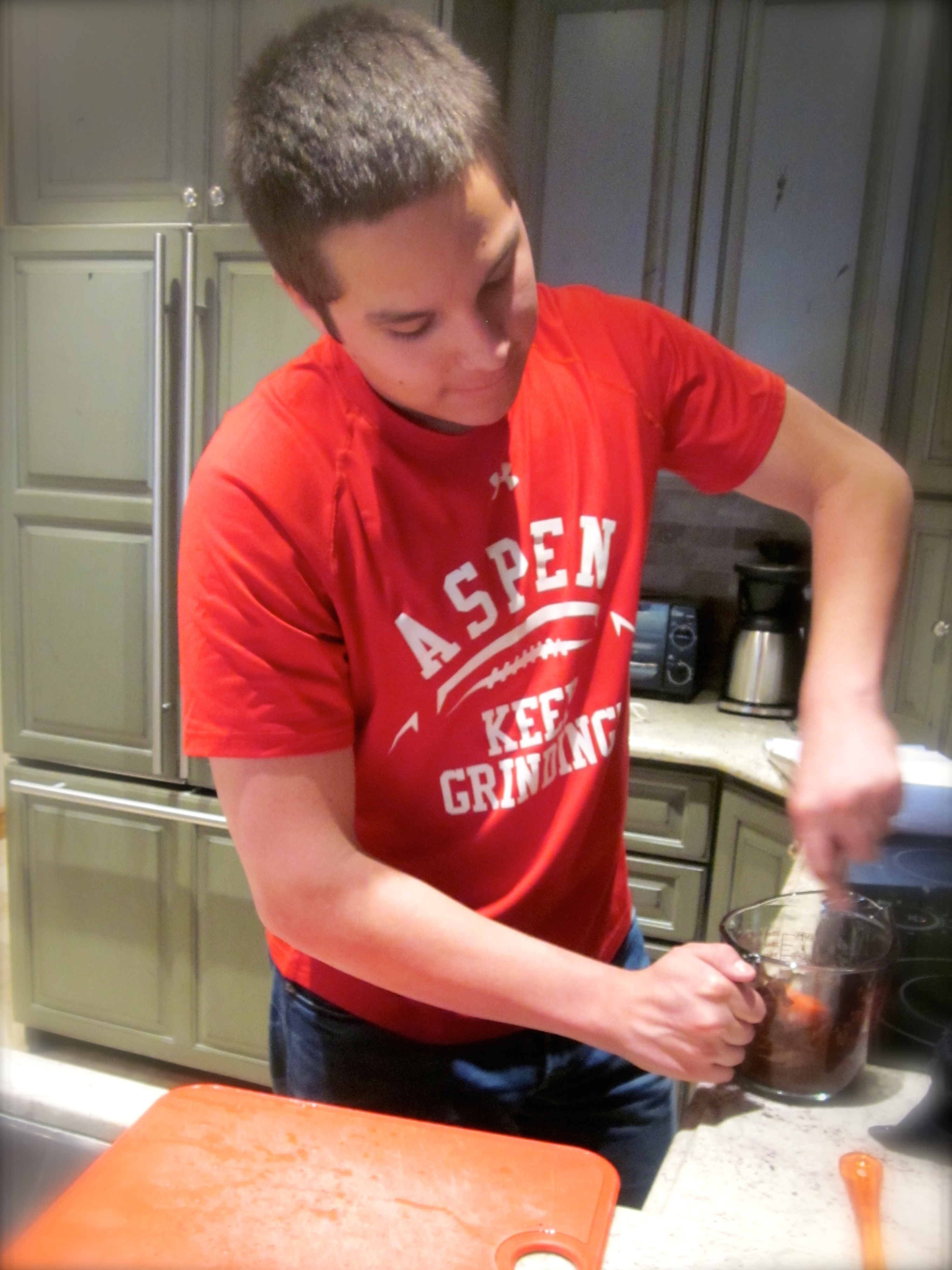 Melting chocolate is always a dicey technique for me. Not too much but just enough. Dom programmed the microwave (15 second intervals) while Cav stirred the 4 ounces of chocolate each time to finally get the proper consistency. It was perfect.

That’s the reason why my young friends, Cav and Dom, celebrated Food Revolution 2014 with me in my kitchen last Wednesday afternoon. 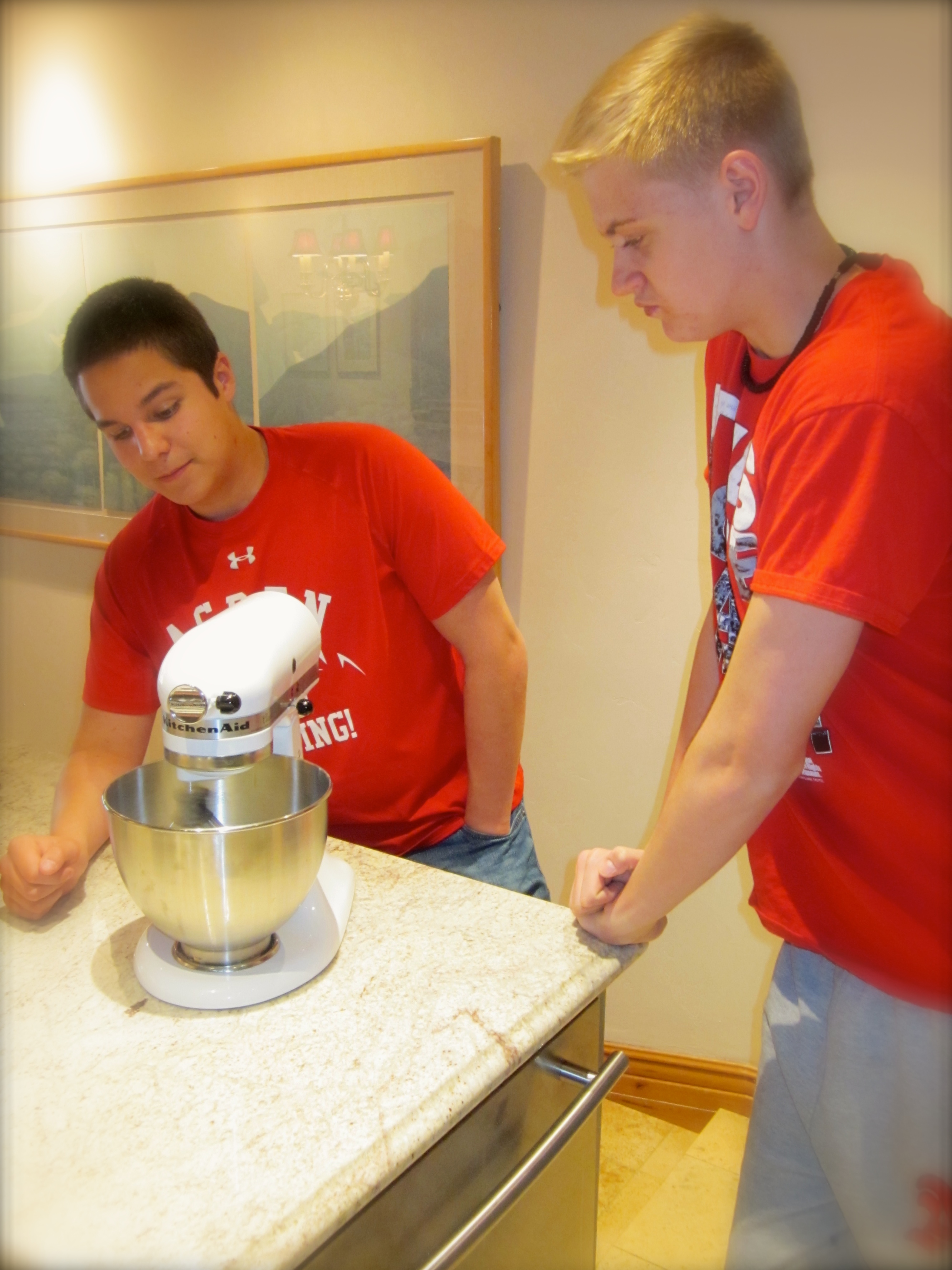 It’s boring to wait for egg whites to form peaks and get shiny. They actually taught me the physics involved in this technique. (Who knew?)

We first made Tzatziki, a Greek yogurt-based blend of seedless cucumbers, fresh herbs, lemon juice, garlic and olive oil. Since it is distinctively tasty and creamy, it’s a great dip for crudités and chips. Although neither Cav nor Dom had tasted Tzatziki before, they recognized and liked the dill flavoring. As a substitute for mayo, maybe? “This would be great on a hamburger,” Cav suggested. 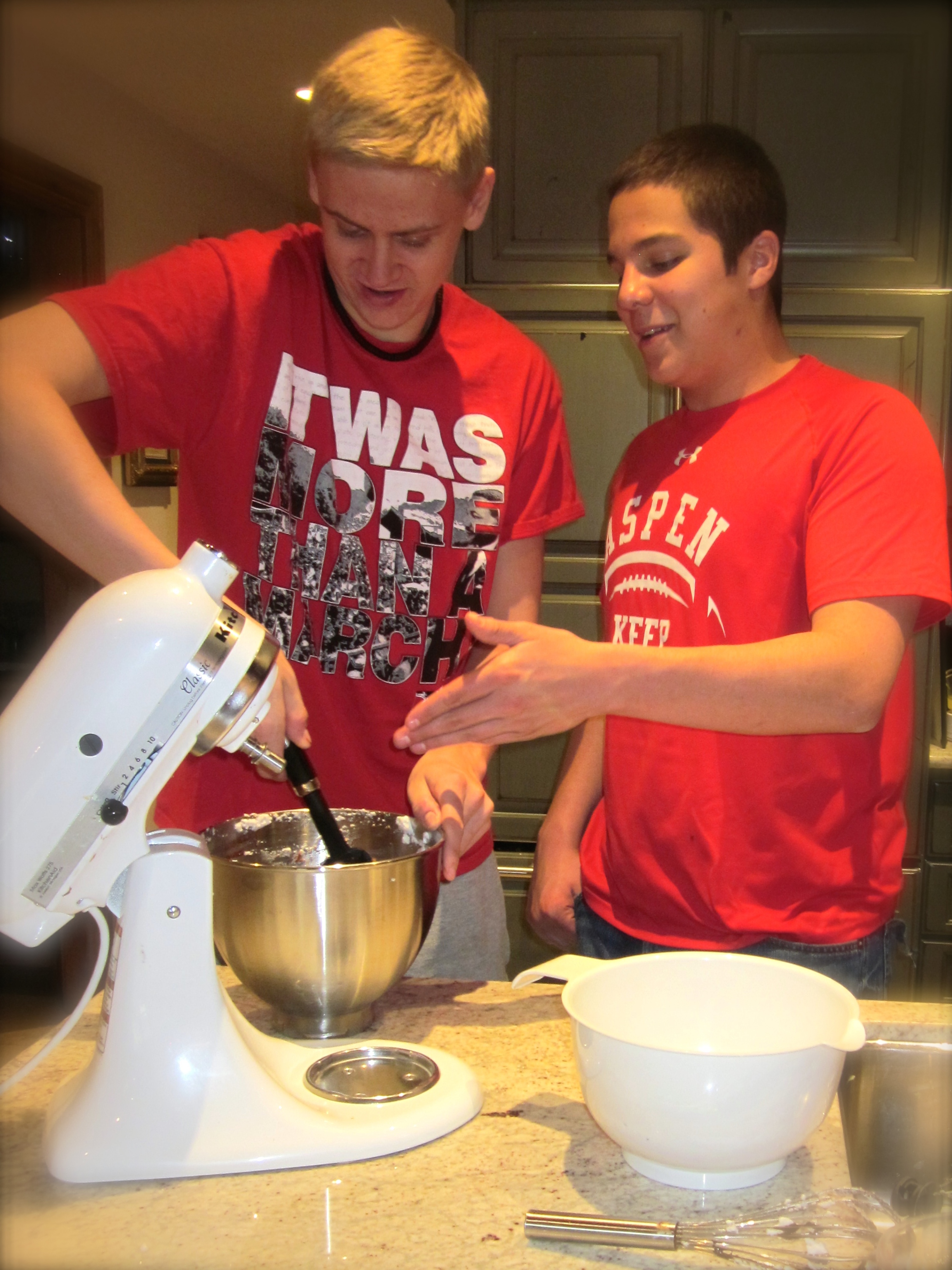 After “lightening” the chocolate with meringue, Dom carefully folds the remaining meringue into the bowl. Cav offers additional instruction.

Because I wanted a show-stopper to rival store-bought cakes, cookies and candy bars, we also made Dorie’s totally decadent Top-Secret Dark Chocolate Mousse. Rich, creamy, and delicious, this mousse is something the boys could make for their parents and eventually their own friends and families. A bit more complicated than Tzatziki, this dark chocolate concoction was awesome (their word, not mine). 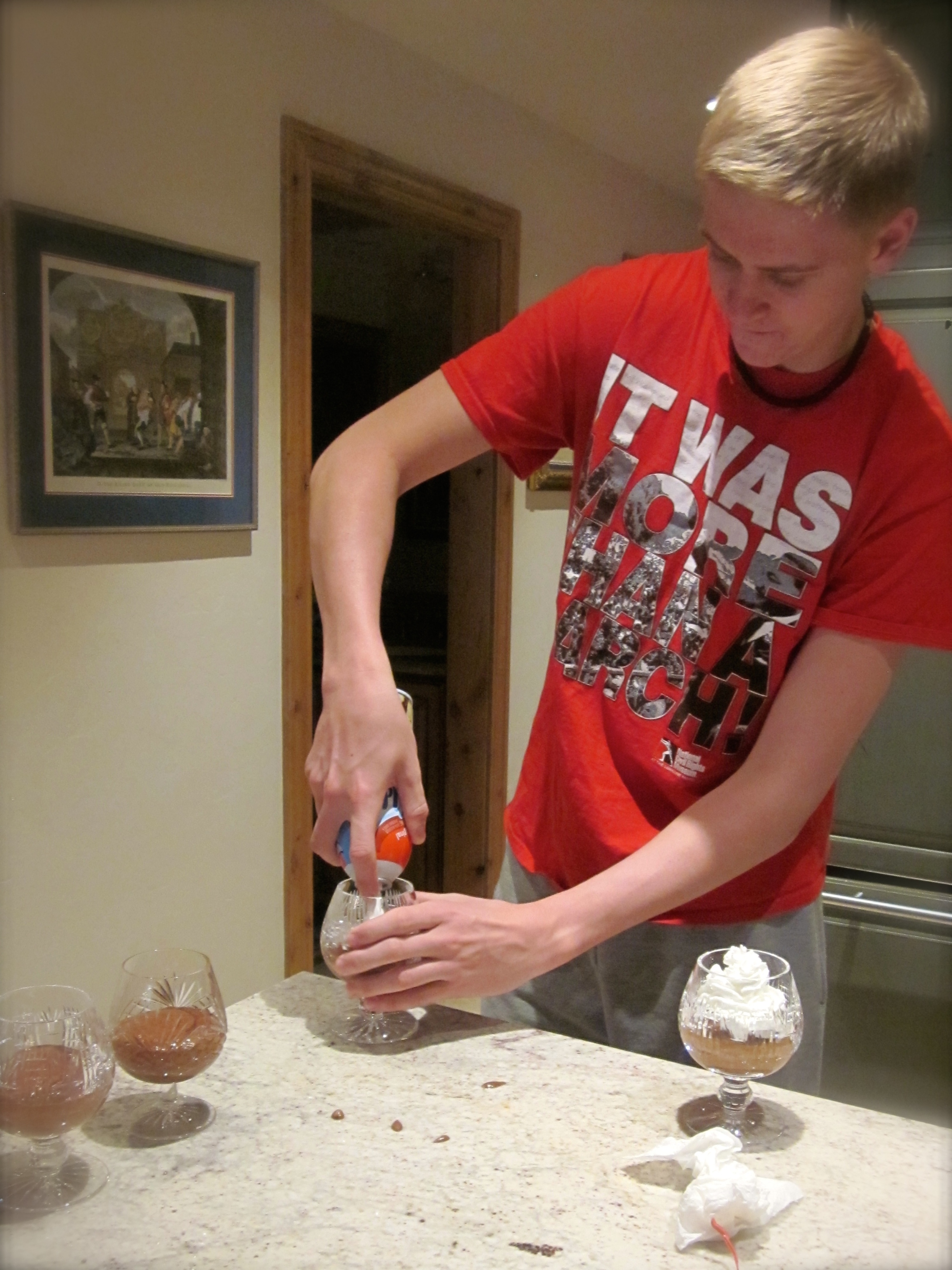 After pouring the mousse into brandy snifters,they each added whipped cream. We used the best product available from a can which worked fine.

I hope you readers enjoy these pictures as much as I enjoyed cooking and spending time with these very handsome young men. Jamie Oliver wants this day to be a celebration with kids and “day of global action to raise awareness of the joys of cooking good food and it’s impact on our health and happiness.” 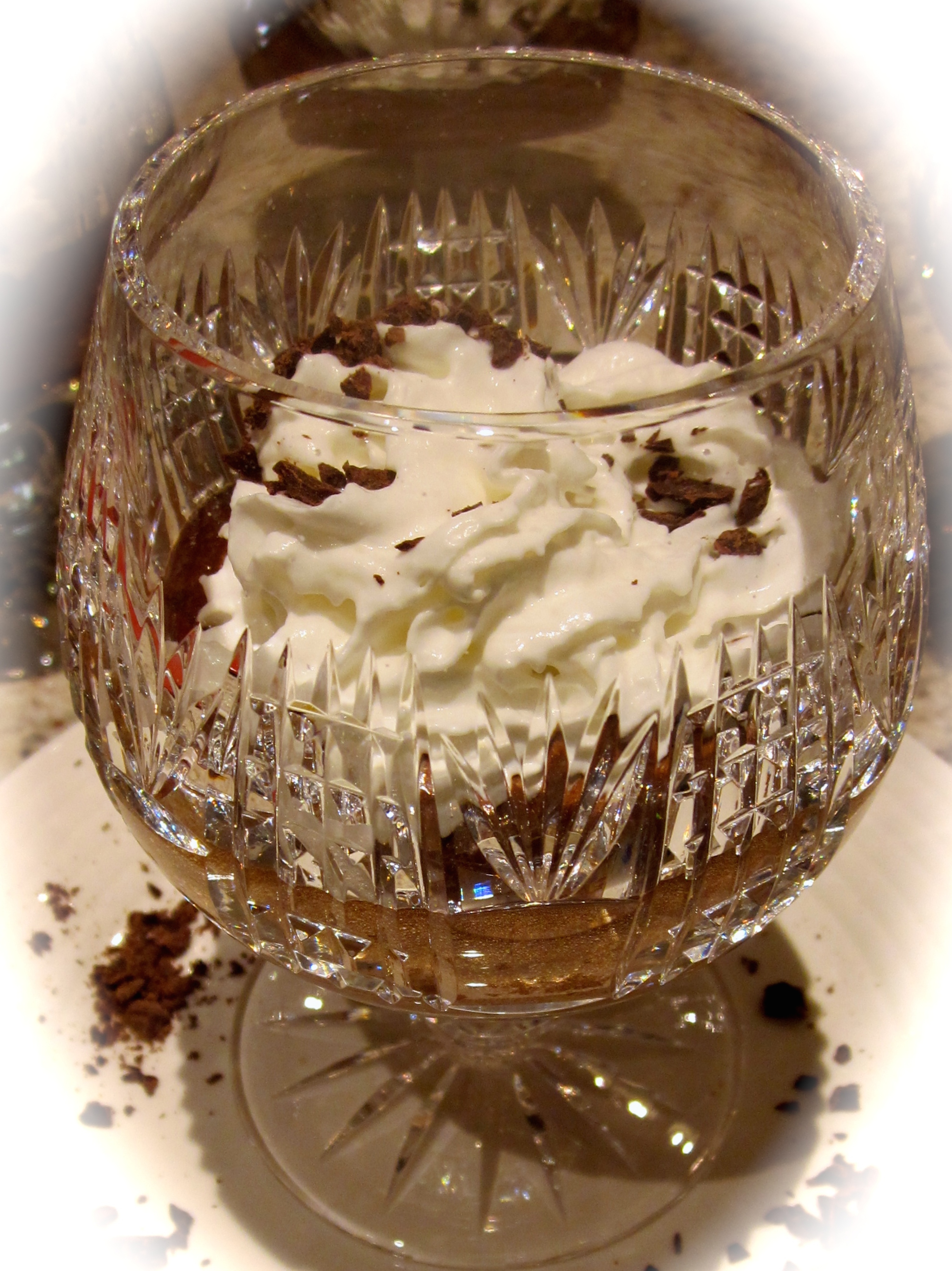 Although they didn’t have time to let the mousse sit in the fridge for an hour before decorating, they still produced a pretty dessert.

It wasn’t easy to juggle busy schedules, practices and classes to make this afternoon happen. And, even I admit that cooking with Mrs. Hirsch was probably not at the top of their Want-to-do List. But, at the end of the day, we’d laughed, weathered a yolks/egg whites separation disaster, handled constant incoming texts from girlfriends and created two rather tasty dishes. I’d call that a pretty perfect revolution, wouldn’t you? 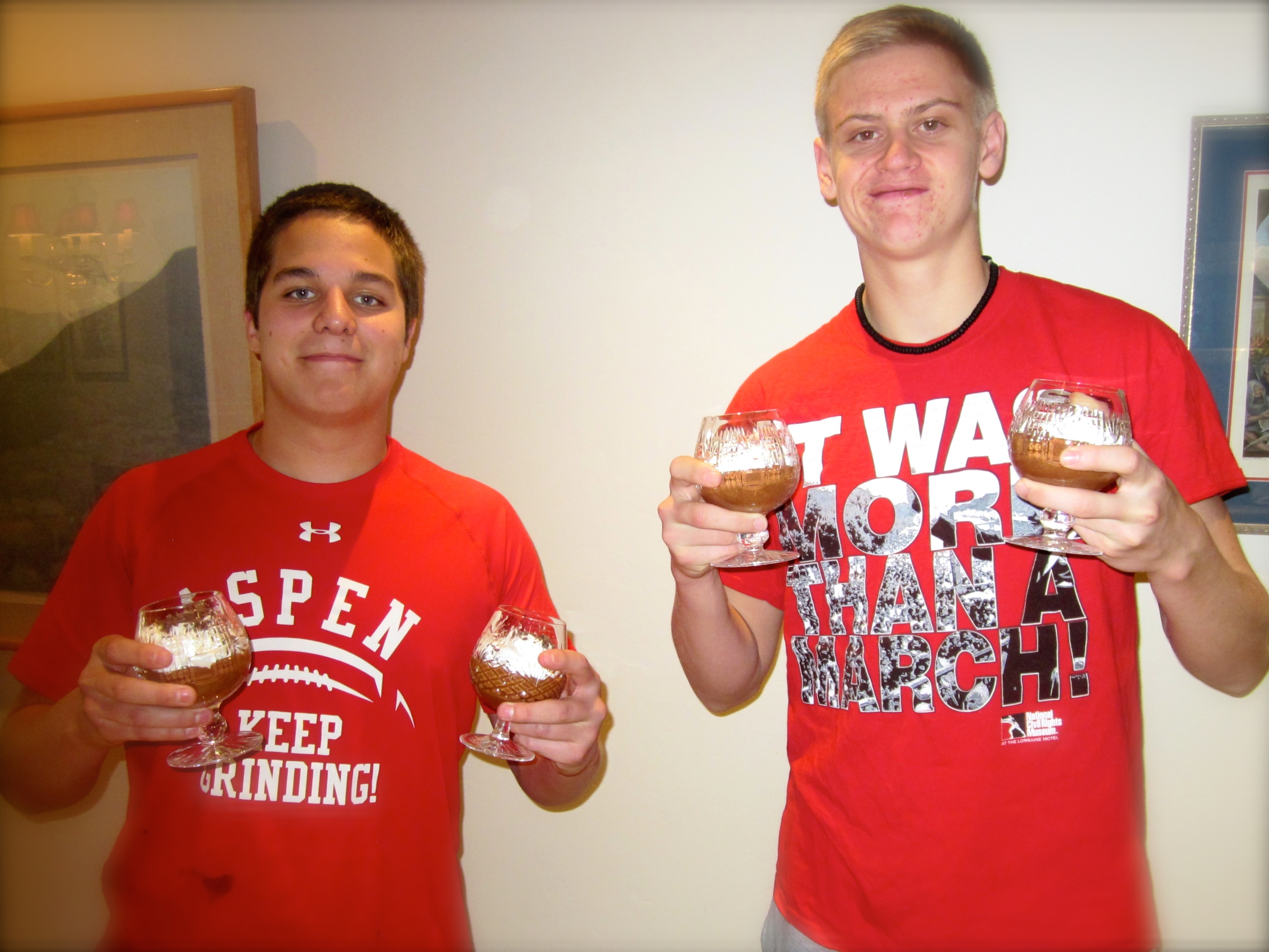 Ready to roll with a boxful of Tzatziki with crudités and chips and a batch of Dark Chocolate Mousse. Good job, Guys.

French Fridays with Dorie is an international cooking group working its way through Dorie Greenspan’s Around my French Table. Although both the recipes in this post are already linked, you can again grab the recipes here and here. If you wish to see the revolutionary efforts of my colleagues, go to our FFWD site.