(My friend and neighbor,  Michelle Morgando, who is a professionally-trained chef, is my guest contributor today.  Although Michelle, who is also a judge and lawyer, is about to launch her own food blog, she has generously agreed to help me and share her expertise with my readers during this time. Thank you, Michelle, and, to all you American readers, Happy 4th of July.) 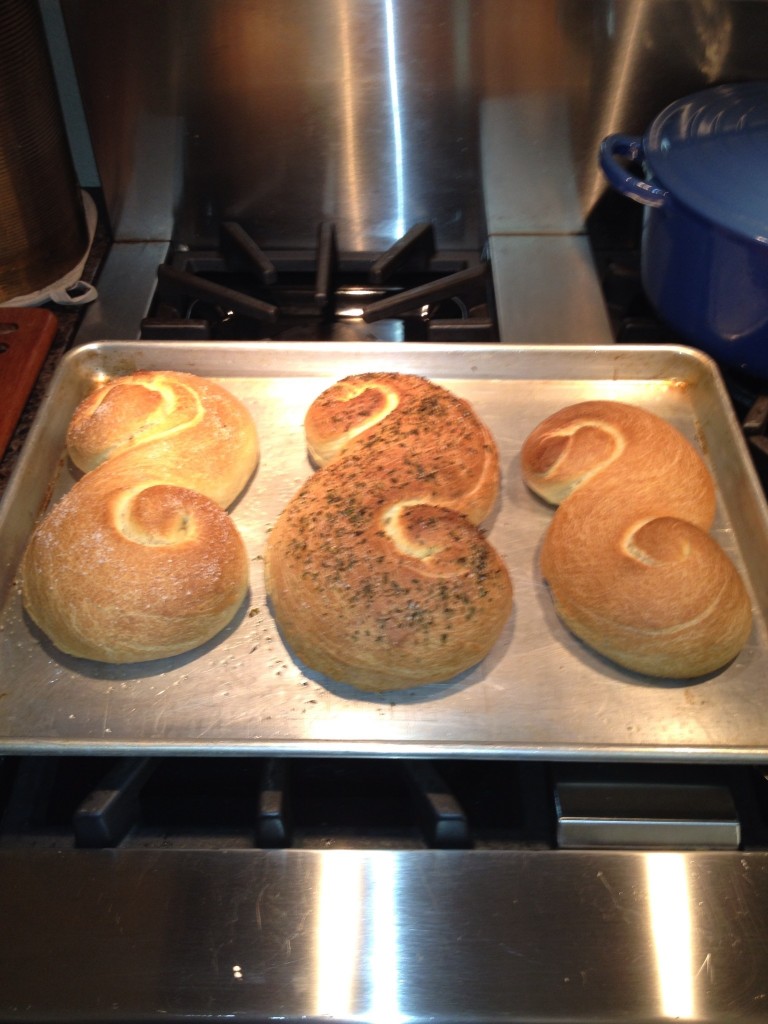 Pane-Siciliano and my sourdough story

I must make a confession, my name is Michelle and I am afraid of bread.  Well, I am not afraid of reading about it, drooling over pictures of it, shopping for it or most importantly, eating it.  Last year in Italy I think I ate half of my body weight in bread in one week.  No, I am afraid of making breads, particularly those that involve yeast.  I must also disclose that I am a professionally trained cook.  I went to culinary school at the very young age of 42 and loved every minute of the two years I spent in school, with the exception of the bread and pastry classes.  I had wonderful instructors but I was so intimidated by the process.  I often wondered why I was so afraid of bread, it has so few ingredients.  All you need are measuring cups and spoons, or a reliable scale, and infinite amounts of patience.  Actually, what you truly need is an ability to give up control.  Once bread is mixed, scaled and formed, all you do is put it in the oven and wait.  Maybe that is my problem.  I can fix a broken Hollandaise, shuck bushels of clams and oysters without losing an important body part or calling 911 and I can grill you the perfect steak.  Those things I have control over from start to finish.  Bread, on the other hand, can’t be remedied once it goes in the oven.  I have learned in the past several years that bread is like a horse or a dog; it can smell your fear.

For the past year or so, I have contributed to a forum that has many wonderful cooks as members.  One of the members, Nancy, started a thread on bread baking.  She is not professionally trained but is as fearless as anyone I know in the culinary industry.  We have never met in person but e-mail almost daily and have spoken on the phone one time.  Nancy decided that it was time to experiment with sourdough starters.  She tried to make her own with no success and then found a wonderful website that will send you, at no cost, an 1847 Oregon Trail Sourdough Starter.  It comes to you in a little envelope and is dehydrated so you must bring it back to life.  After reading her posts, I decided to face my fears and begin my own sourdough trail.

I patiently waited for a couple of weeks for my starter to arrive as I kept track of Nancy’s efforts.  Her breads were so beautiful and she posted step-by-step instructions along with great photographs.  My starter finally arrived so I set about rehydrating it with water, flour and some dried potato flakes.  It sounded simple until I was reminded that I have to give my starter a name.  All of Nancy’s were called “Bob” and a one point she likened them to Tribbles (all you Star Trek fans will get this reference).  I decide to name mine “Bettie”, after my mother who passed away last year.  I was hoping she would bring me good bread karma.

So, as you see in my opening picture,  my starter is all fed and ready to go.  You can tell it is doing well by the amount of “action” it has.  It should be very bubbly and alive. Lo and behold, here is “Bettie” after two days: 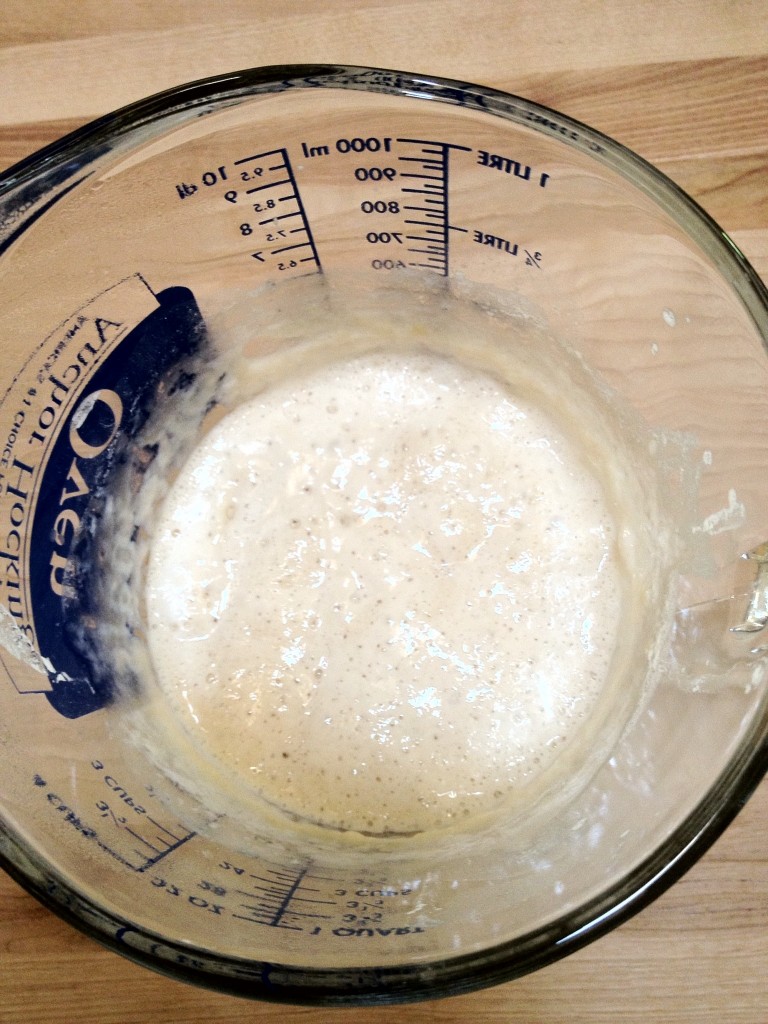 “I often wondered why I was so afraid of bread, it has so few ingredients.  Actually, what you truly need is an ability to give up control. Once bread is mixed, scaled and formed, all you do is put it in the oven and wait. Maybe that is my problem.”

I decide to start with the most basic of breads, the sourdough baguette. I found a recipe from a site that I have trusted in the past and followed the recipe as written.  I was a little suspicious because not only did it call for the starter to make the initial “sponge”, which is later mixed with flour and water to make the final dough, but it also called for additional yeast and vital wheat gluten.  Yeast I have, vital wheat gluten entailed a trip to Whole Foods.  I was tempted to leave out the additional yeast and/or wheat gluten but given my past disasters, I figured the experts knew what they were doing so I ignored my suspicions.  The sponge rose beautifully, as did the final dough.  Encouraged, I deflated the dough to form the baguettes and all I can say is the consistency was like trying to nail Jell-O to a tree.  It was sticky, runny and downright impossible to work with.  Disappointed, but determined not to waste two days of work, I dumped it on the counter, added a lot of flour, kneaded it and put it in an oiled sheet pan.  I brushed the top with olive oil, added some coarse salt and dried herbs and baked a focaccia.  My lovely Italian neighbor, Adriana, took it to her parents’ house that night and they had it with antipasti.  They said it was delicious, maybe they were being nice.

I began to suspect that I just did not have what it takes to be a bread baker.  I still had more of the Bettie starter so I then attempted sourdough biscuits.  These are the same as a good old Southern biscuit but are made with a sourdough starter and no butter.  To my complete surprise, not only did they turn out but they tasted terrific: 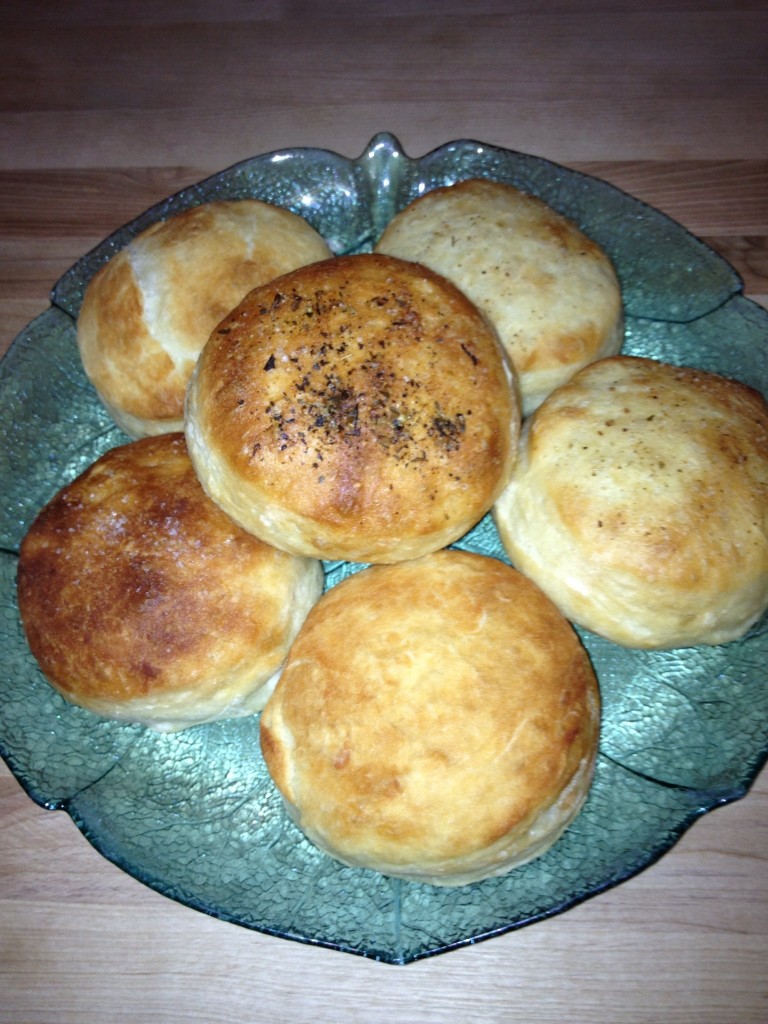 No sourgrapes needed…… my first attempt at sourdough biscuits worked.

Meanwhile, Nancy had moved on to increasingly complicated recipes.  She sent me the recipe for Pane Siciliano, a wonderfully moist and dense olive oil based bread using the sourdough starter.  I was scared of trying the baguettes again so I decided to try her recipe.  This was truly a three day labor of love between making the biga (the sponge), making the final dough, forming the loaves, letting them rise and finally baking them in a 500 degree oven with steam.  I thought since I failed at making the most basic of breads, I might as well go down in flames with a really complicated recipe.  The difference was, I was not afraid of this recipe.  The final results were spectacular as you can see in the opening picture. 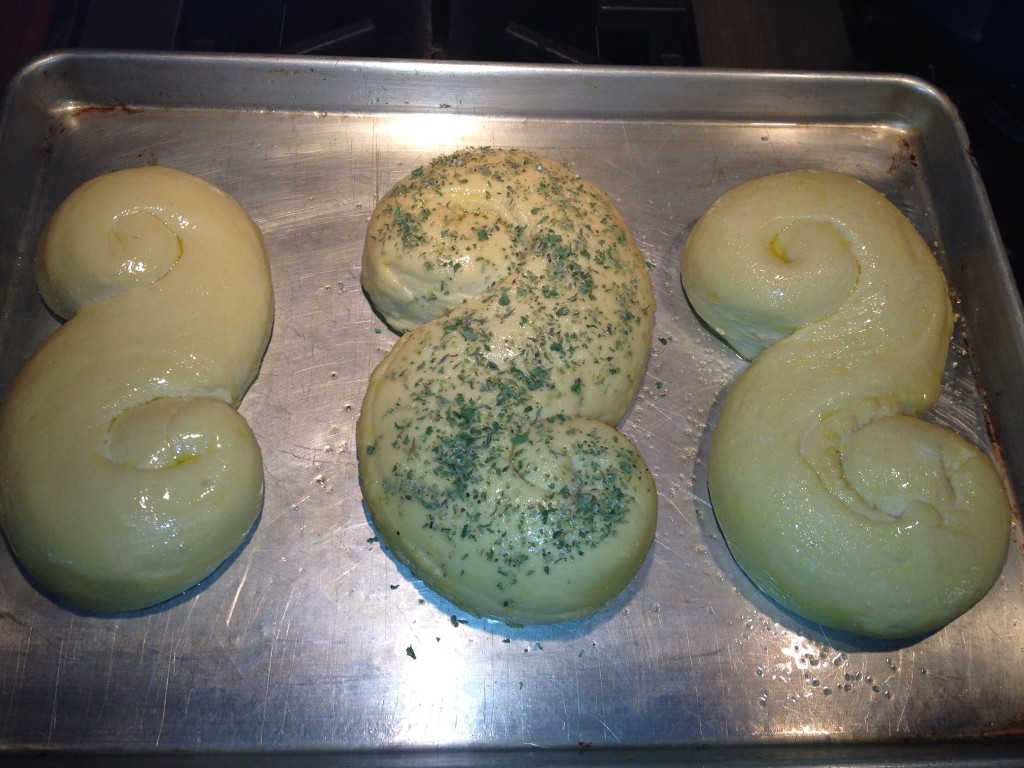 I am slowly gaining more confidence and am now experimenting with creating different starters from my “mother” starter.  More on that later, and my second attempt at the baguettes.  Wish me luck, I already have the courage.

Some websites that I love for breadbaking are:

Two books that I find invaluable are: Baking With Julia, by Dorie Greenspan (based on the PBS series) Le Cordon Bleu, Professional Baking, by Wayne Gisslen (3rd Ed.)

« Orange Juice, Melons, and Tea Parties: A Tribute to Michael
My Daughter Does Dorie: Hot and Hunky Cucumbers »