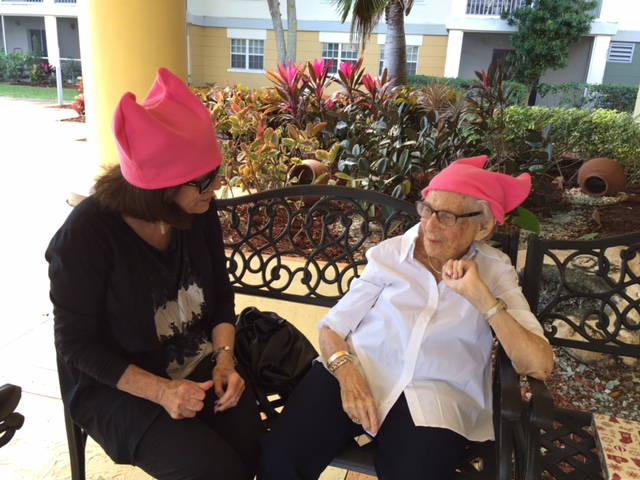 My friend, Dr. Marilyn Susman celebrated the 99th birthday of her mother, Helen Epstein, in Palm Beach. “We walked around the pond at Brookdale.” Marilyn said. “Other residents were at their windows or outside cheering us on.” Happy Birthday, Mrs. Epstein.

Democracy is messy. We Americans have inaugurated presidents since April 30, 1789, when George Washington took his oath at Federal Hall in New York City. Last week Donald Trump became our 45th president. A week-long celebration by his supporters in Washington DC was exciting. Jubilation reigned. Winning is fun.

However, on the next day American women grabbed the reins. LightsonBrightNoBrakes is not only devoted to food but, more importantly, to the lifestyle I’ve created after losing my husband. Today’s post is about my participation in that historic Women’s March 2017. 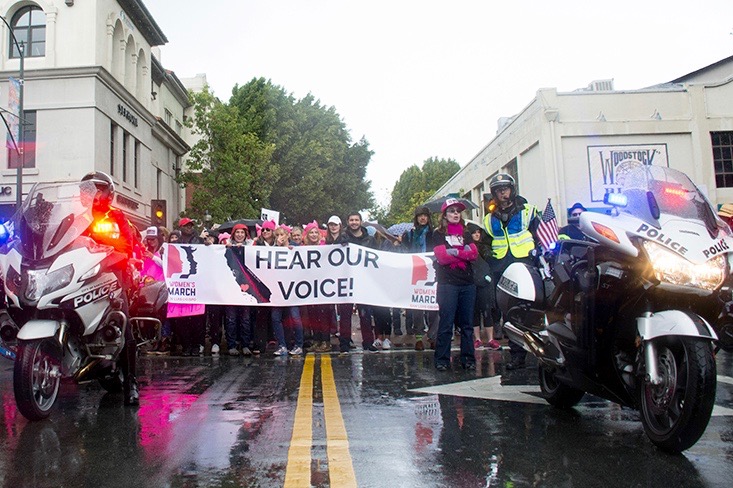 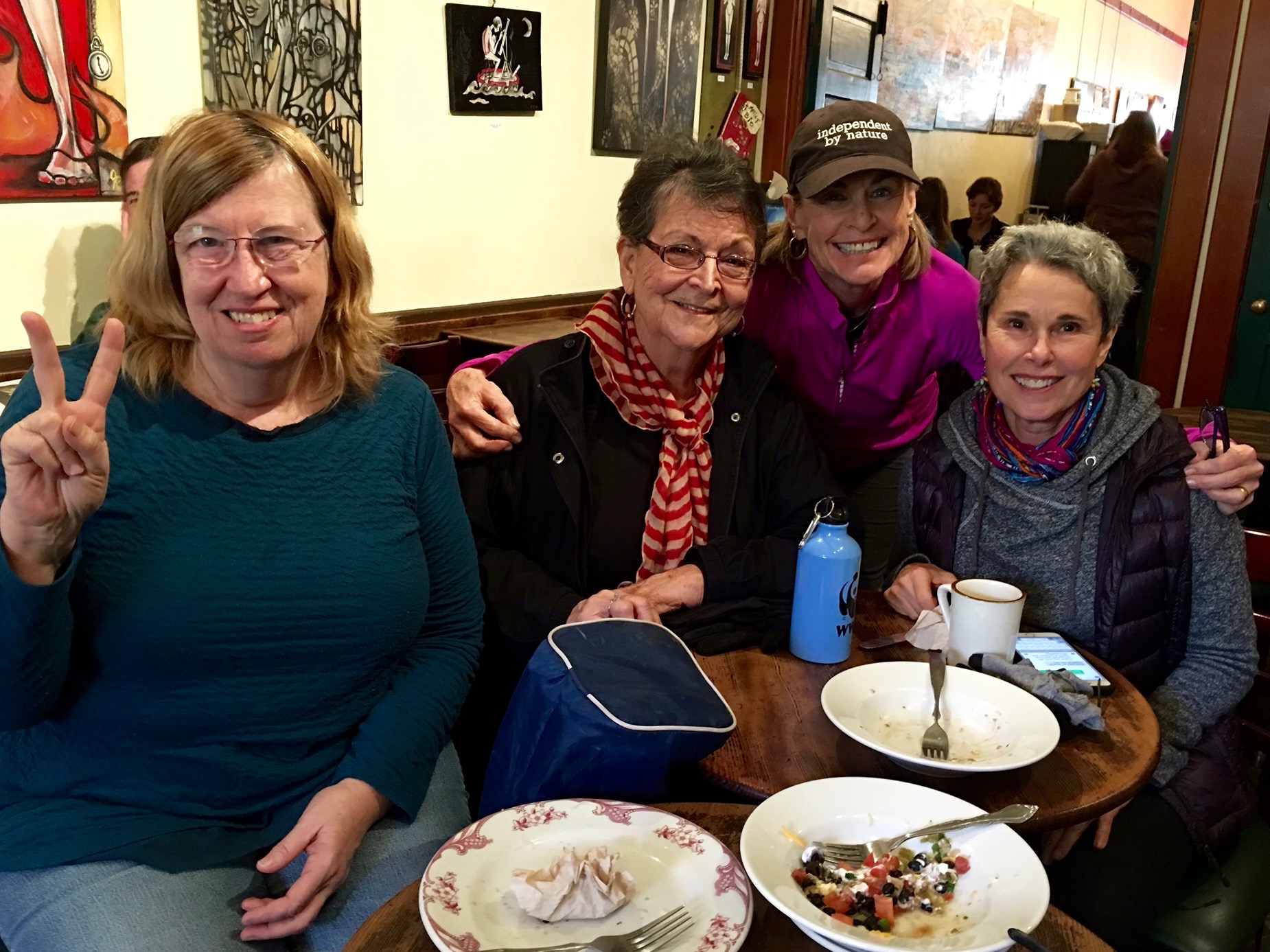 Since the early birds gets a parking space, I arrived in SLO very early before the March. These three women invited me to join them for breakfast. Thank you, Janice

Everything about this day was perfect, uplifting and peaceful. While being my own one-man band in San Luis Obispo, I spent the day surrounded by a lifetime of friends, thanks to the miraculous magic of my iPhone.

FRENCH FRIDAYS with DORIE, the DORISTA’S, my cooking colleagues from around the world, were marching. Dorie Greenspan, our mentor and friend, marched in Paris. I also got March On-messages from Emily in Khala Lumpur, Andrea in Bonn, Adriana in Puerto Rico, Trevor in Thailand and many America gals. 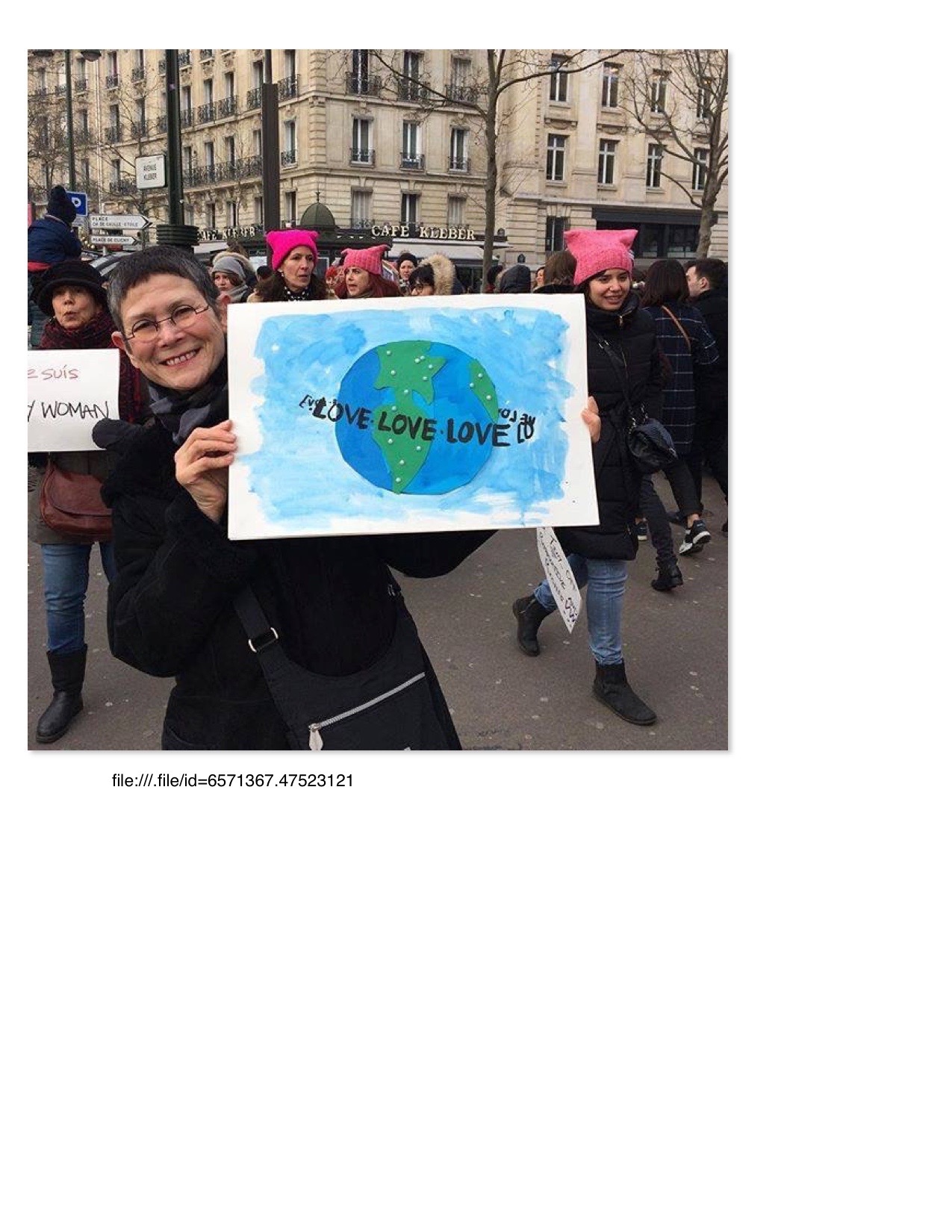 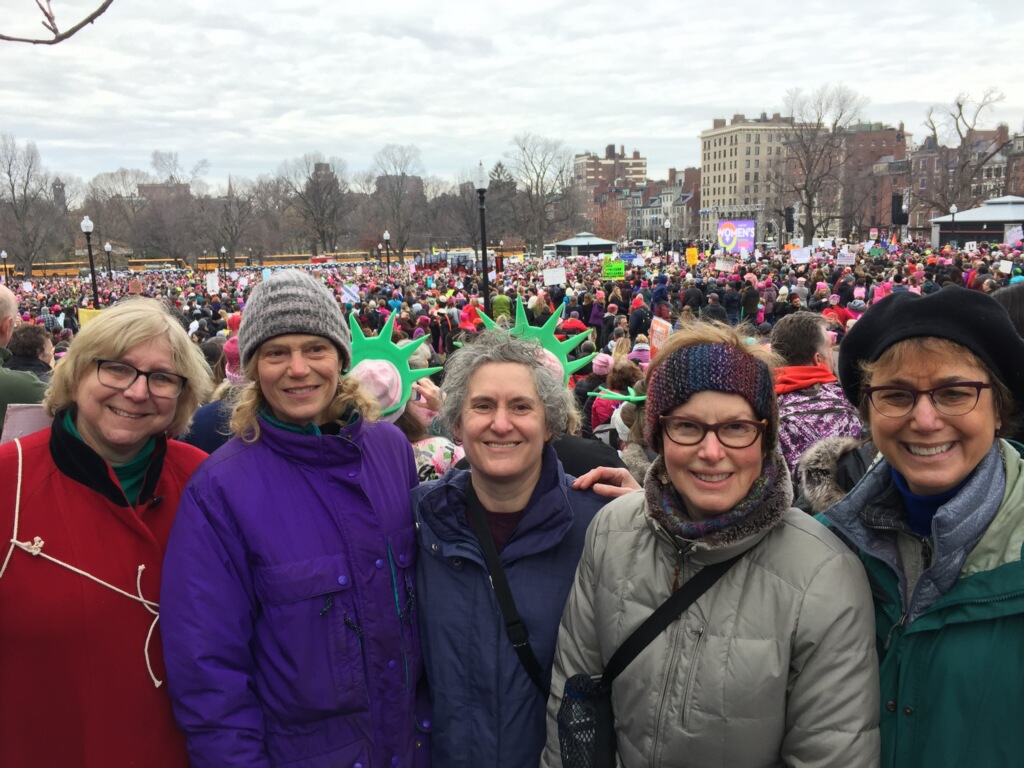 Betsy (C), an administrator with me on FFWD and CtBF, was in Boston with 175,000 of her best friends. 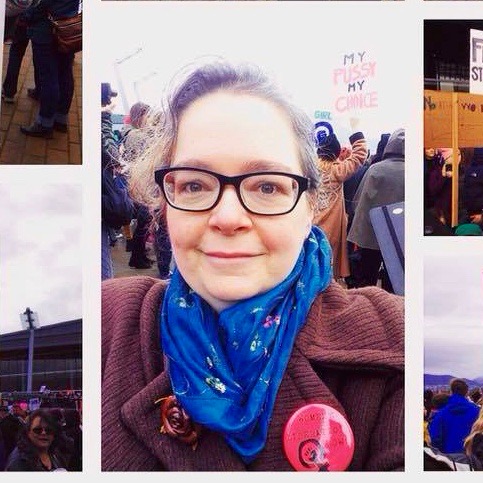 Teresa, who virtually walked through the last year with me, is from Vancouver. 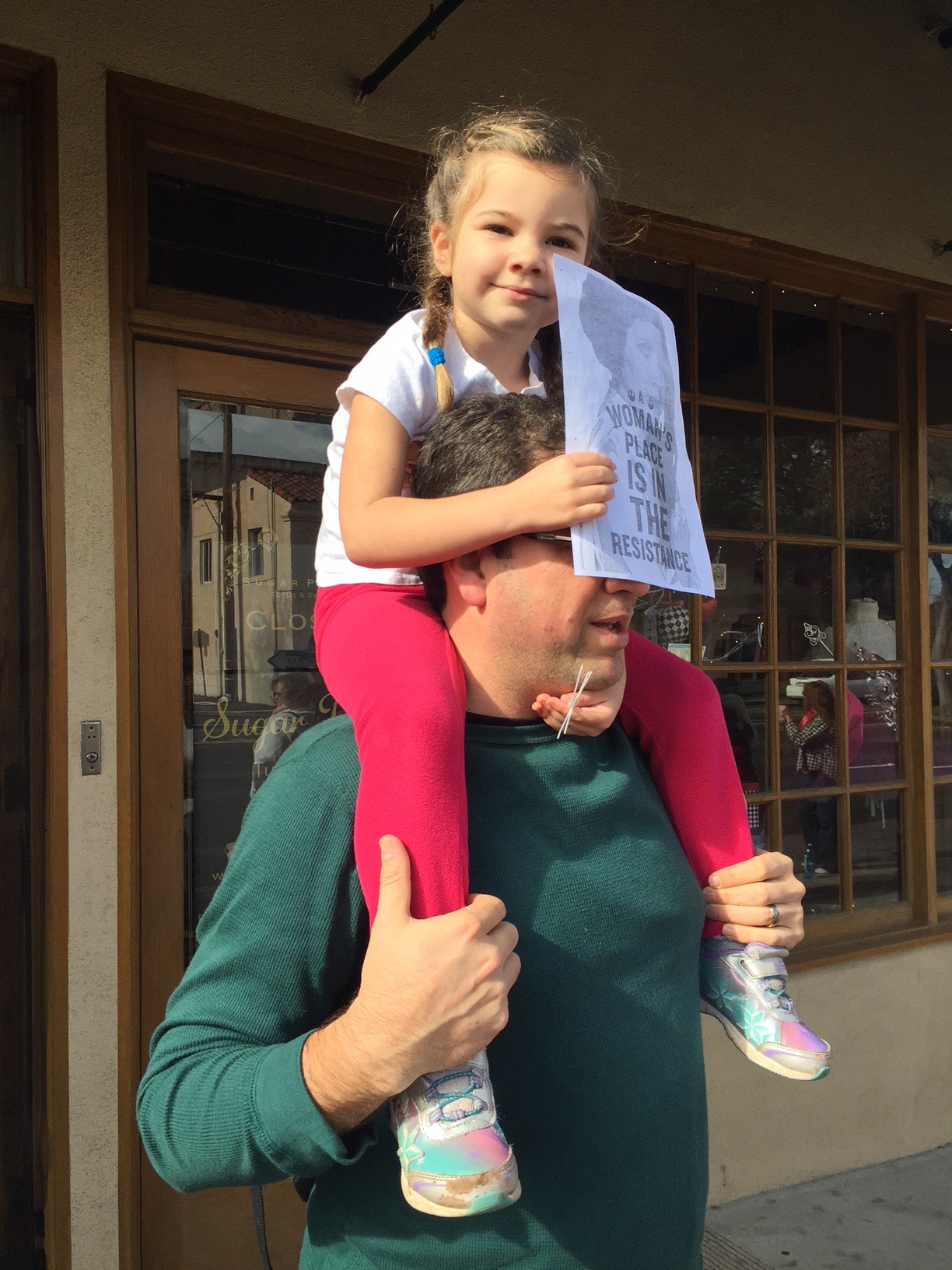 Alaia rode while her dad, Marcel, and Katie, the administrator of CtBF’s and UCSB professor marched. 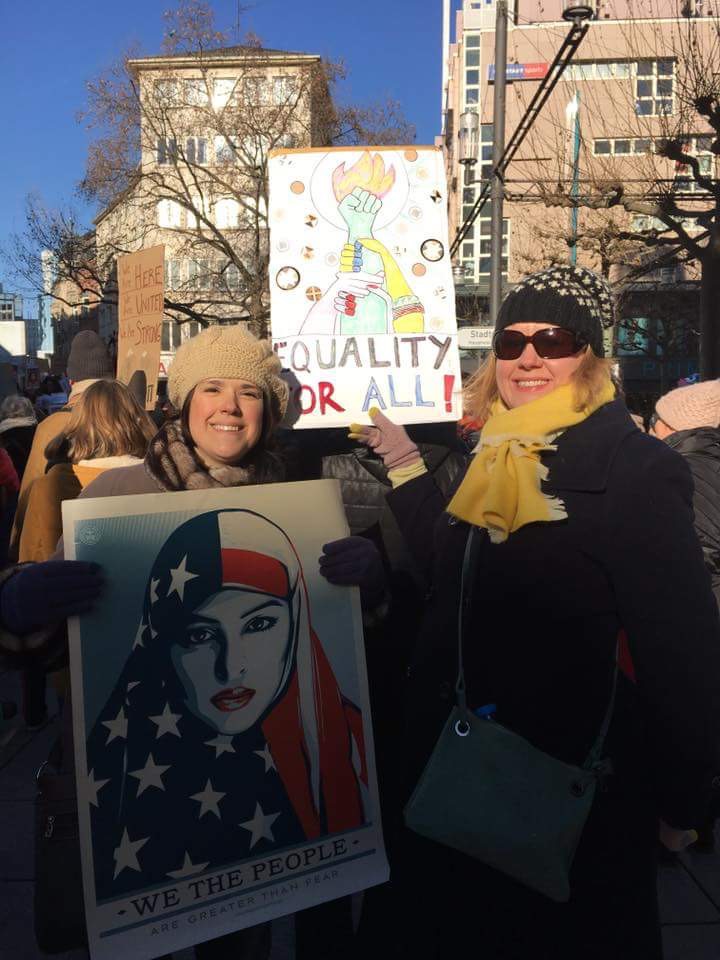 Another Dorista, Rose in Frankfurt, Germany

PLAN 1: After the election I read about a possible January 21st Woman’s March in Washington. Undecided but curious I booked a flight and reserved a room at Club Quarters Hotel located two blocks from the White House. In late December after reading about inauguration security concerns, I had second thoughts. Worst case scenario: my son-in-law flying across the country to settle civil disobedience charges against his mother-in-law. I bailed! 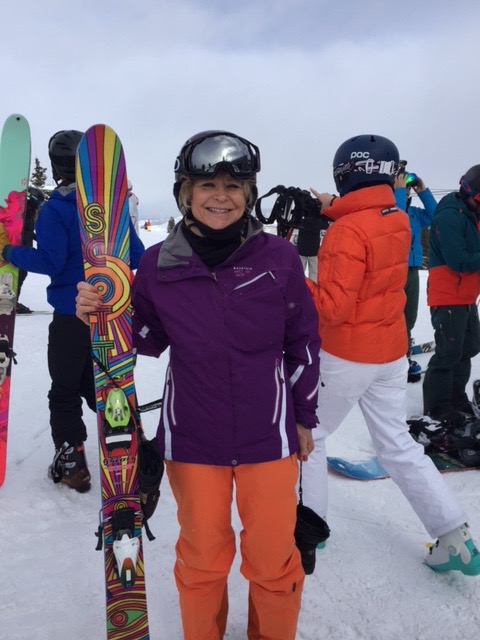 Donna Grauer and many of my other friends skied down Aspen Mountain as part of the March. 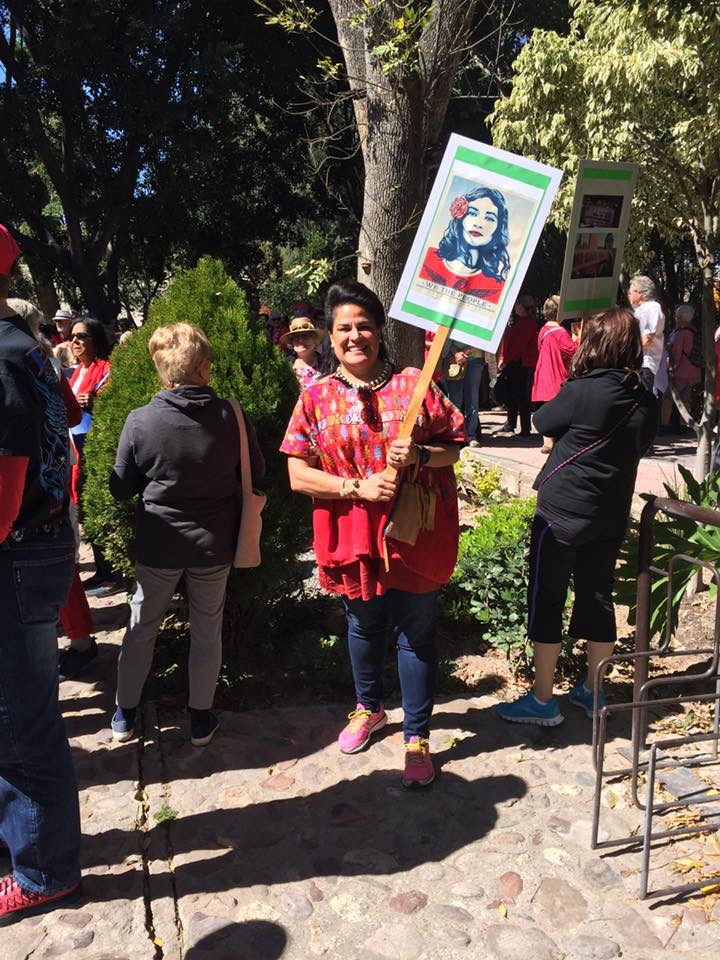 My longtime Aspen neighbor, Blanca, was in San Miguel de Allende. During the March, her husband, Cav, linked me to her and friends in Vail and Aspen.

PLAN 2: In early January I noticed San Luis Obisbo, located 35 miles from Cambria, was holding a Sister March. I signed up. Since I would be alone, I began to “customize” my Women’s March, owning it, so to speak. I contacted friends, inquiring about their participation and, like the march itself, the numbers kept growing.

MANCHESTER, FRIENDS from MY HOMETOWN 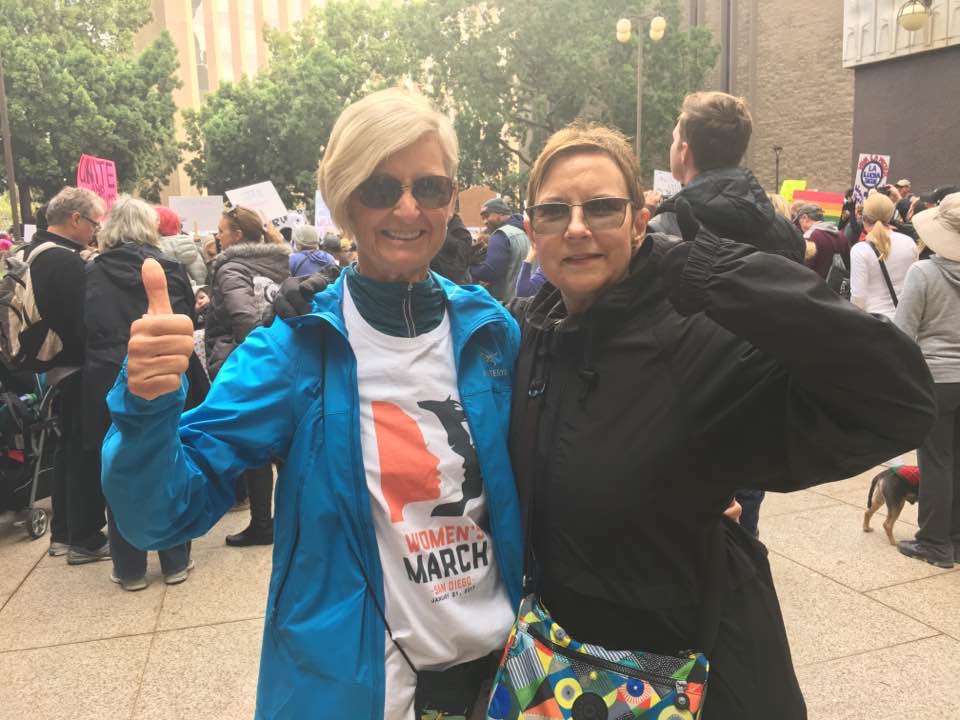 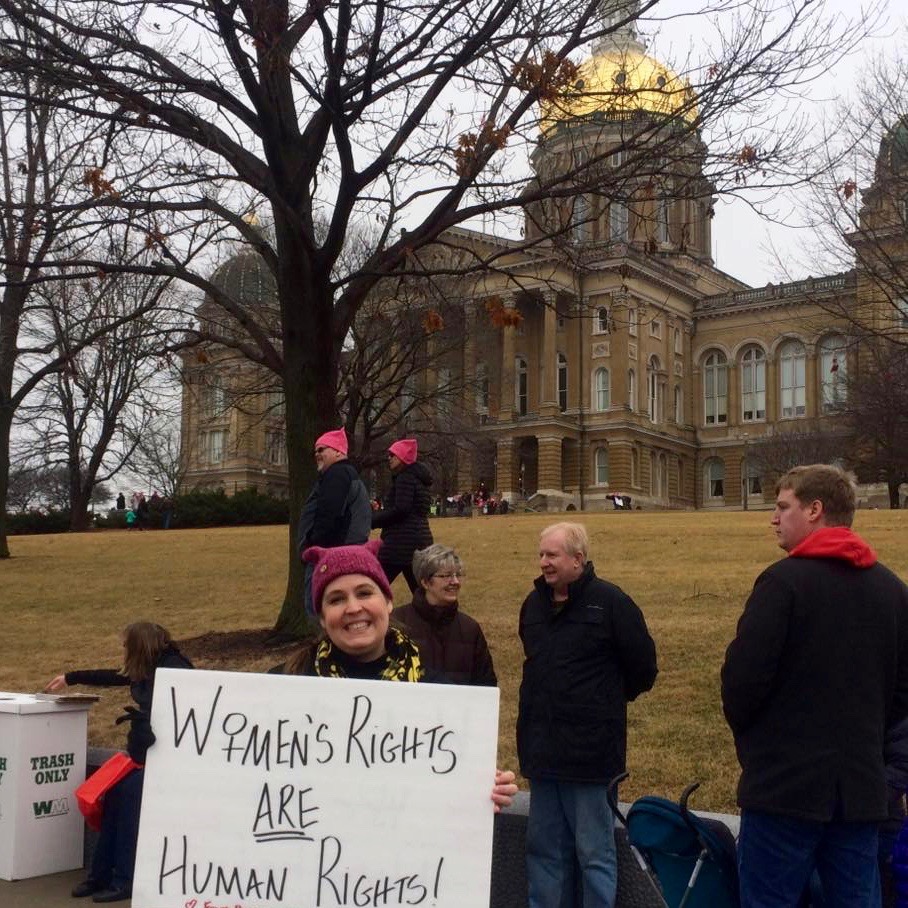 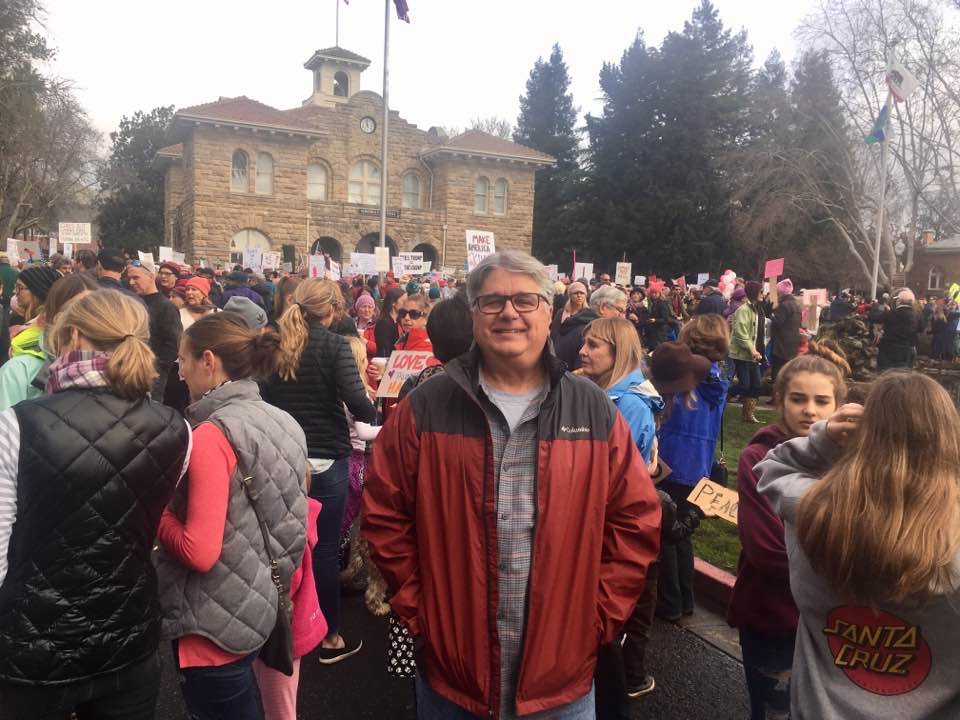 One of the really good guys from the Class of ’62, Jim Goodwin, marched with his sister, Kris, in Sonoma.

On January 21st, I joined a visual friendship circle strung together on social media and physically lined up with some 8,000 to 9,000 marchers in SLO. I realized, as the day progressed, I was participating in the largest organized march of protest in American history. To date, about 3.3 million people participated in 408 marches in 500 American cities. Worldwide participation included 168 cities in 81 countries and on every continent bringing our number close to 4.8 million. Only women could pull together an event of that magnitude in just two months. 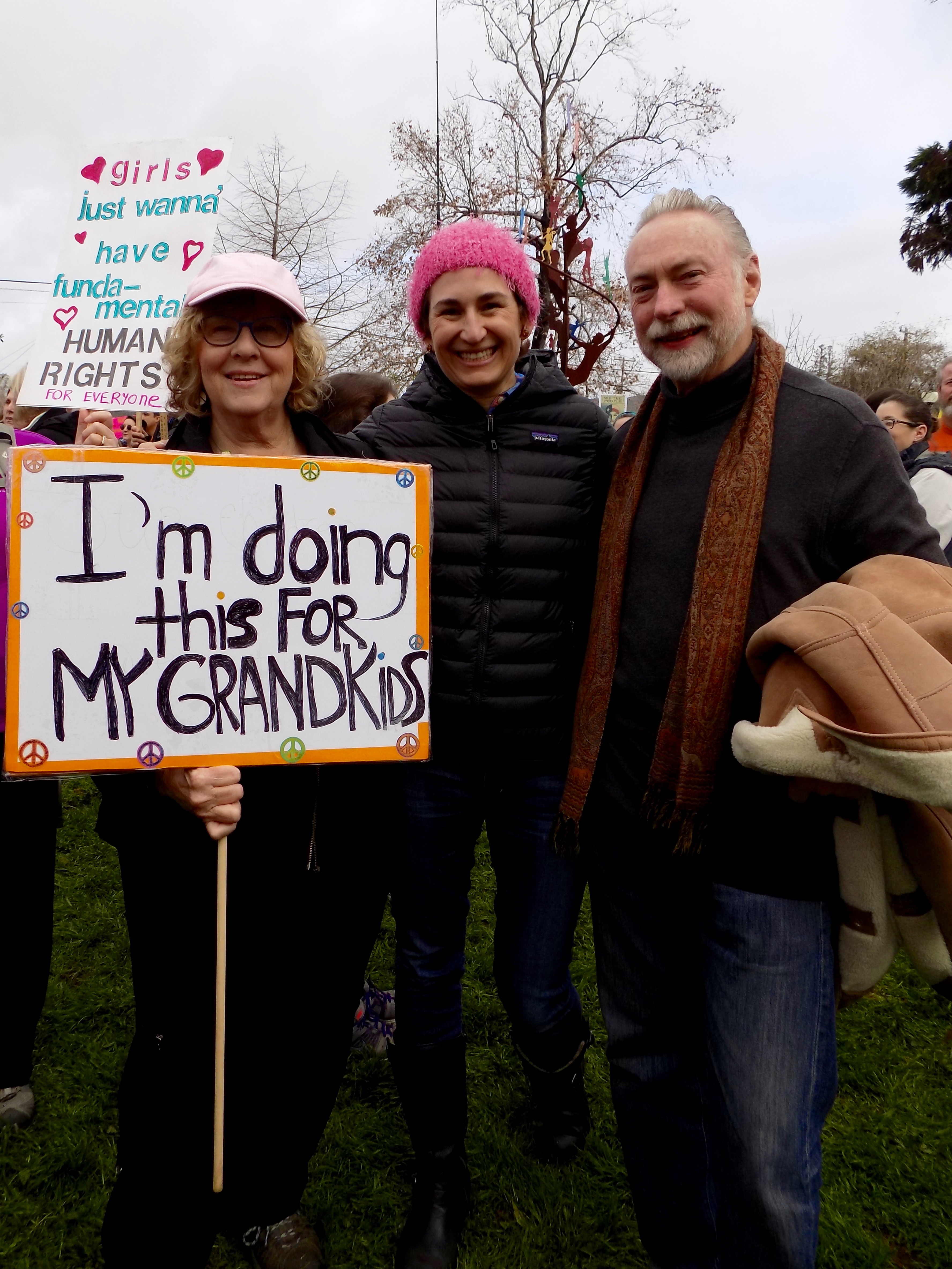 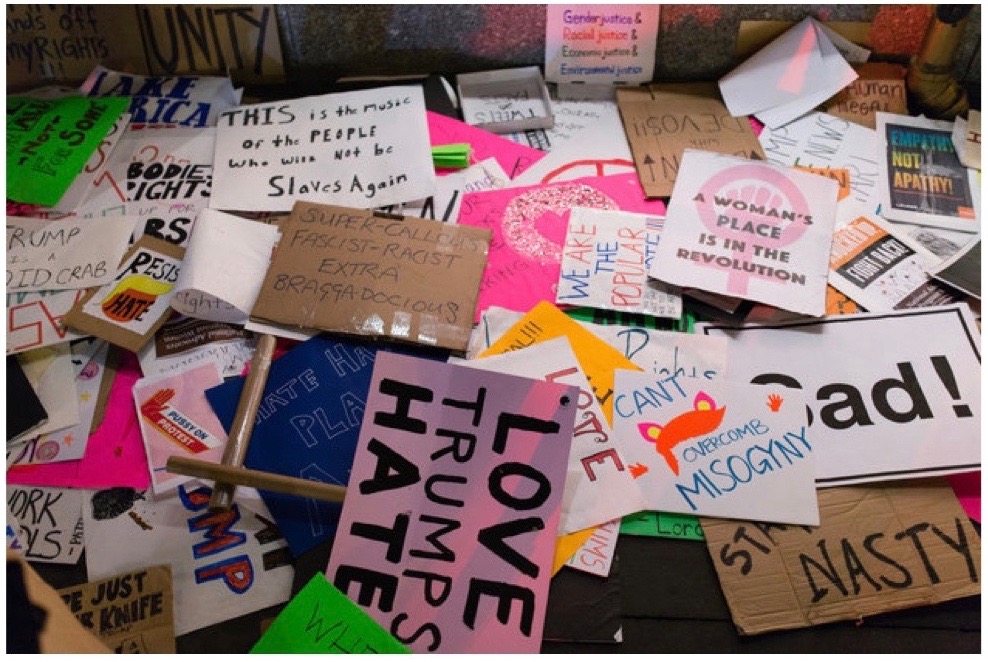 Museums Worldwide including some Smithsonian Museums, Are Collecting and archiving Women’s March Posters and memorabilia.

Do I believe this March will encourage policy changes or compromises by the Republican Trump administration? When Pigs Fly. (In a Word, No.)

But, “Just as plants need sun, water, and good soil to thrive, people need love, work, and a connection to something larger.” The Happiness Hypothesis, Jonathan Haidt

The Womens March for Human Rights 2017 was my something larger. 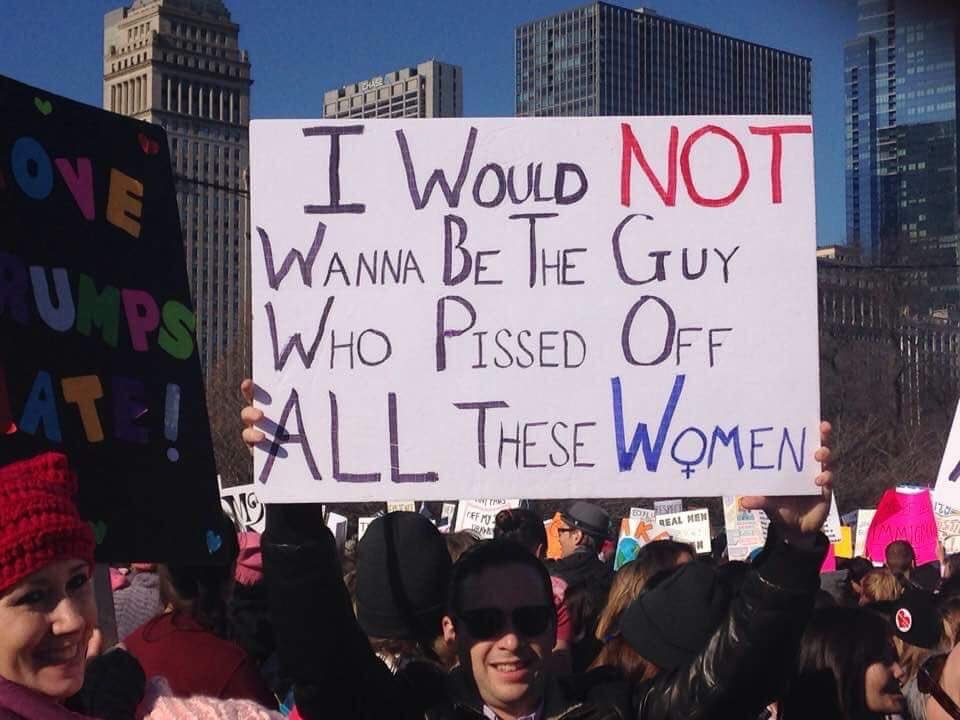