I know what you’re thinking. Who needs another baking powder biscuit recipe?  This sounds like an appetizer party-nibble to me. Hey, who even hosts cocktail parties anymore?

Okay, maybe this was what I was thinking yesterday morning when my feet hit the floor, earlier than usual, to channel Dorie and bake this week’s FFWD recipe. However, I’ve learned not to underestimate Ms. Greenspan who carefully tested and selected each of the 300 recipes that appear in her cookbook. So, within fifteen minutes the onions were sizzling in the skillet;  the flour, sugar, salt and baking powder, whisked together; the milk and butter bits, ready-to-mix. 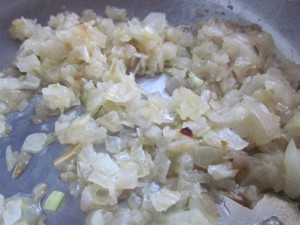 Carmelizing onions at 6am in the morning. That’s a first! 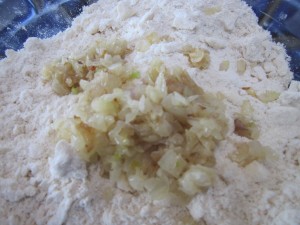 I measured the dry ingredients, put them into the bowl with the softened onions and poured in the liquid – whole milk.

Another fifteen minutes later, and barely through listening to NPR’s Morning Edition’s first segment, I placed the baking sheet into a 425 degree oven. 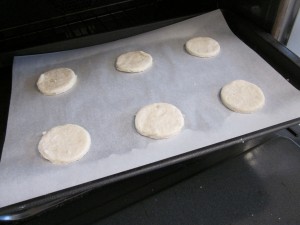 Ready to shove into a 425 degree oven 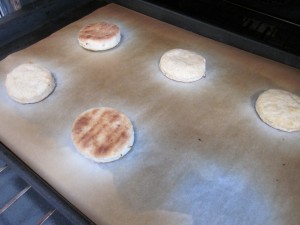 CAUTION – My biscuits were finished to perfection, top and bottom, in 9 minutes, half the time that Dorie suggests.

To put this biscuit in the “little quick bread” category (which it is) seems a great disservice. To reserve it primarily for cocktail circuit fare is just plain wrong!  The faint flavor of carmelized onions blended wonderfully with the orange marmalade and raspberry preserves I spread on two of the warm biscuits. Served with an omelet or frittata, even better. What a feast to enjoy to honor  International Women’s Day (March 8th). 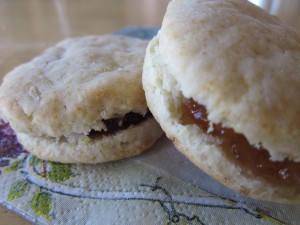 Really, these biscuits are so subtle in their taste and texture they will work with many different food choices. Why not make them a house special, as Dorie suggests. Rather than baking off all three-dozen biscuits, I froze some on a baking sheet until they were solid, packed them airtight and placed them in my freezer where they will last for two months.

It’s a real treat to scroll through the posts of other FFWD participants and a bonus opportunity to glean their good ideas and recipe suggestions. I often jot these in my cookbook, next to the recipe, for future reference. To see how other Doristas fared this week, go to http://www.frenchfridayswithdorie.com/.  You also might enjoy this site  http://www.goodeatsblog.com/2010/10/birthday-wishes-and-saint-germain-des.html . 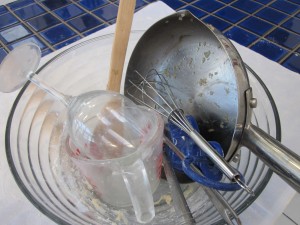 « WHO SPEAKS FOR THE TREES WITH NO TONGUES? SNAP OUT OF IT
THE SOUFFLÉ ALSO RISES, FRENCH FRIDAYS with Dorie »