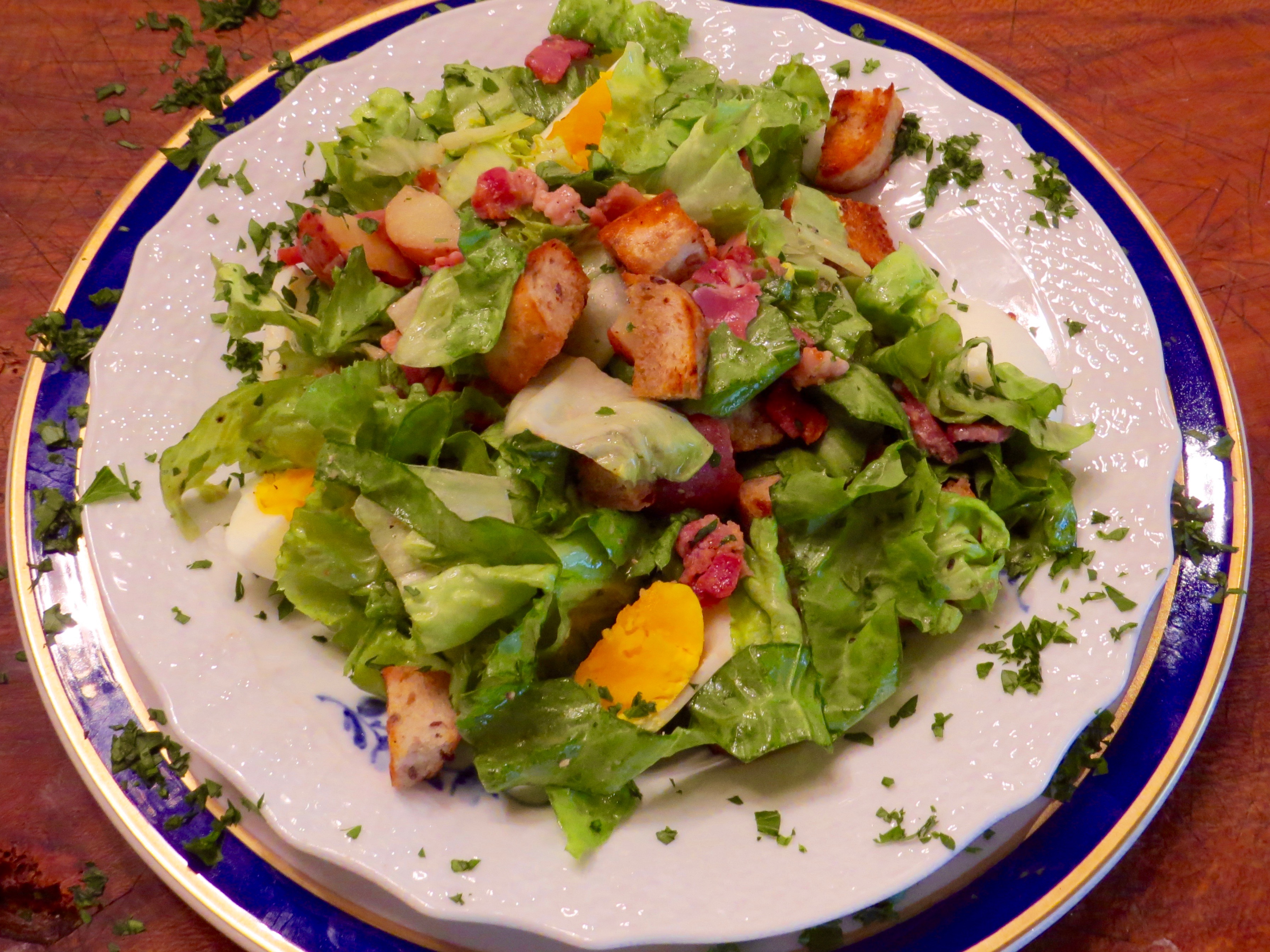 Count on it. The day I drive back to Aspen, after a winter absence, it is always snowing. My last Thursday’s arrival didn’t disappoint, a real blizzard. But after picking up my keys at The Gant’s office and corralling Dan, who drew the short straw, we got my car unloaded. Home, very sweet Home. 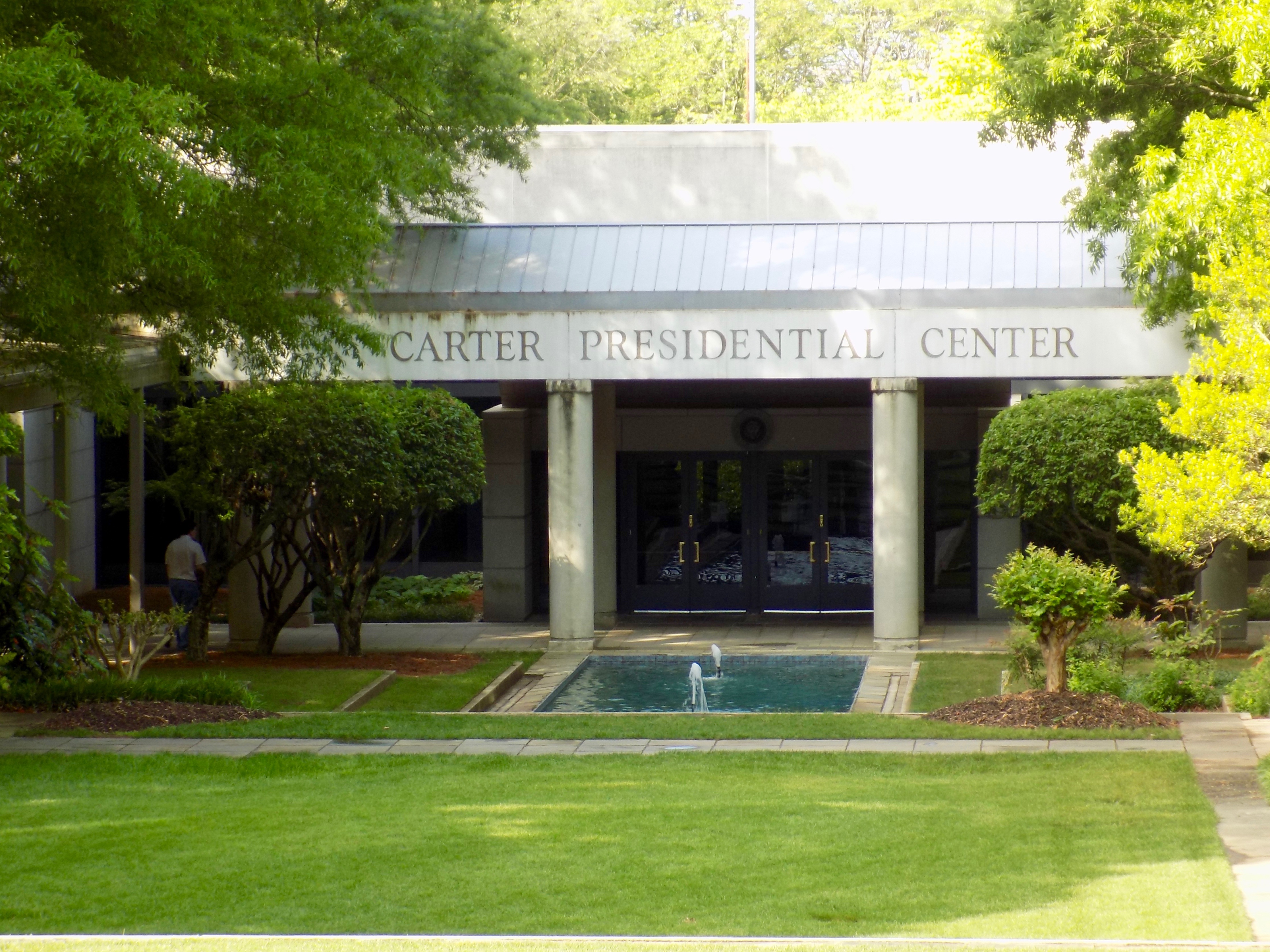 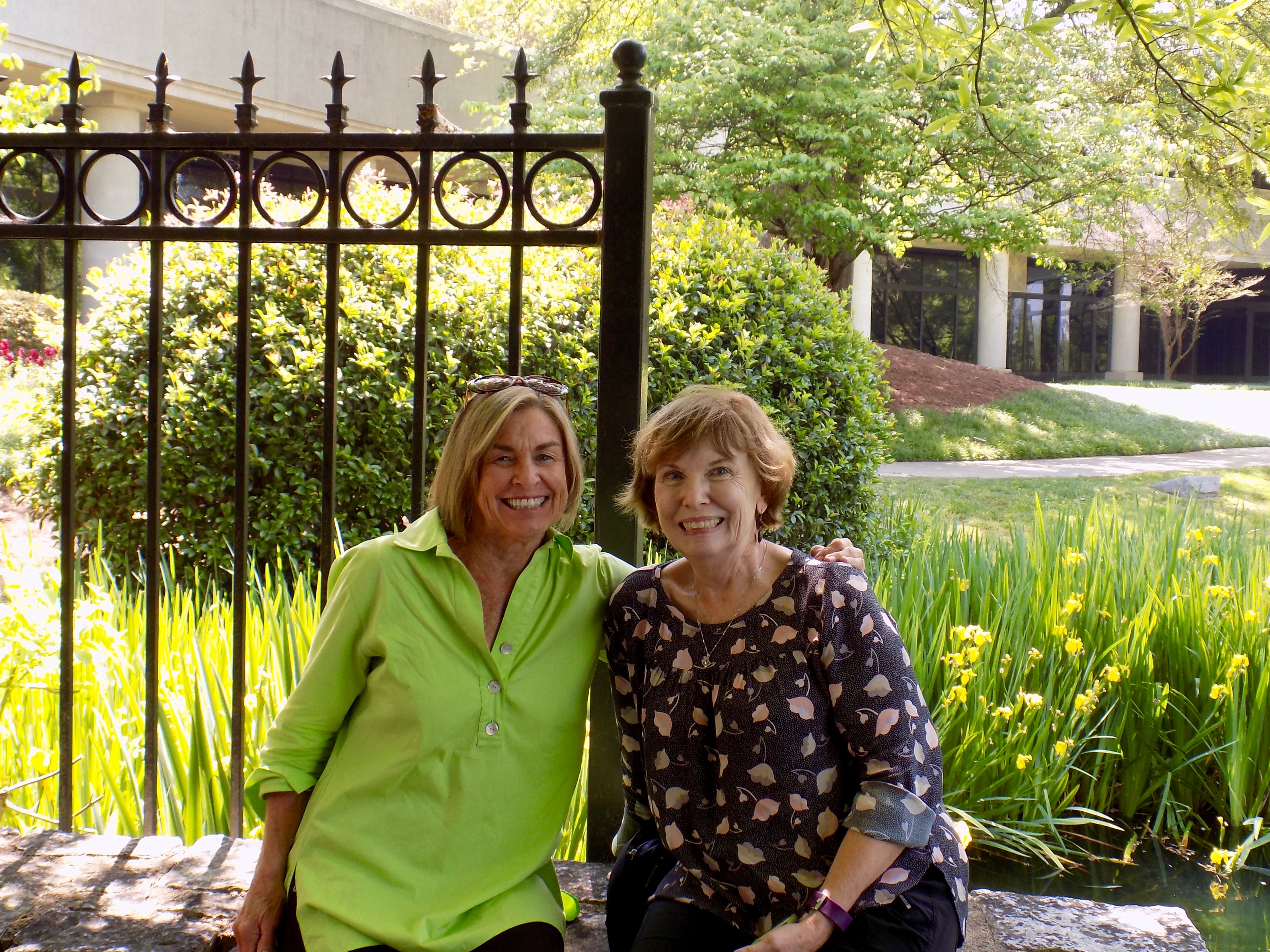 My friend, Ardyth Sohn, and I spent a week in Atlanta seeing this library and other historic sites before my returning to Colorado. It was a 2-mile walk from our hotel to the library so Ardyth and I spent some time relaxing in a beautifully landscaped area of the 35-acre park.

This past week of unpacking and resettling gave me pause to kick around my gypsy-esque lifestyle. Let’s just admit it. Are there many women, enjoying their seventh decade, who load six-months of Life into a car and hit the road each year? Seriously? Even I am realistic enough to realize this is not a long-term lifestyle. But while I can, I will. I do not yet have a Plan B. 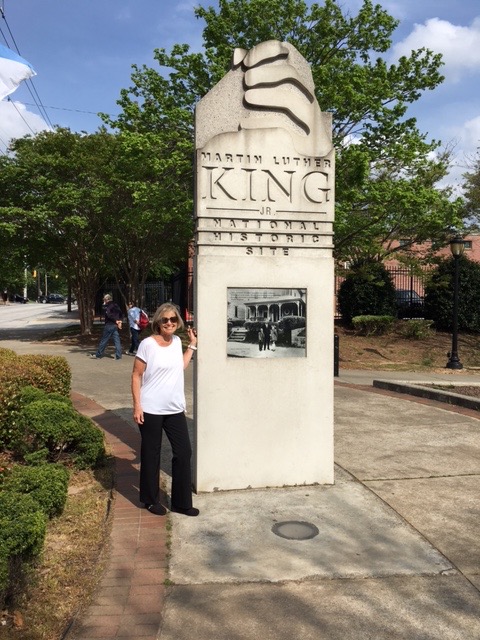 We walked The Freedom Trail to The Martin Luther King Historic Site which included a museum, his home, Ebenezer Baptist Church and the Kings’ resting place with an eternal flame. 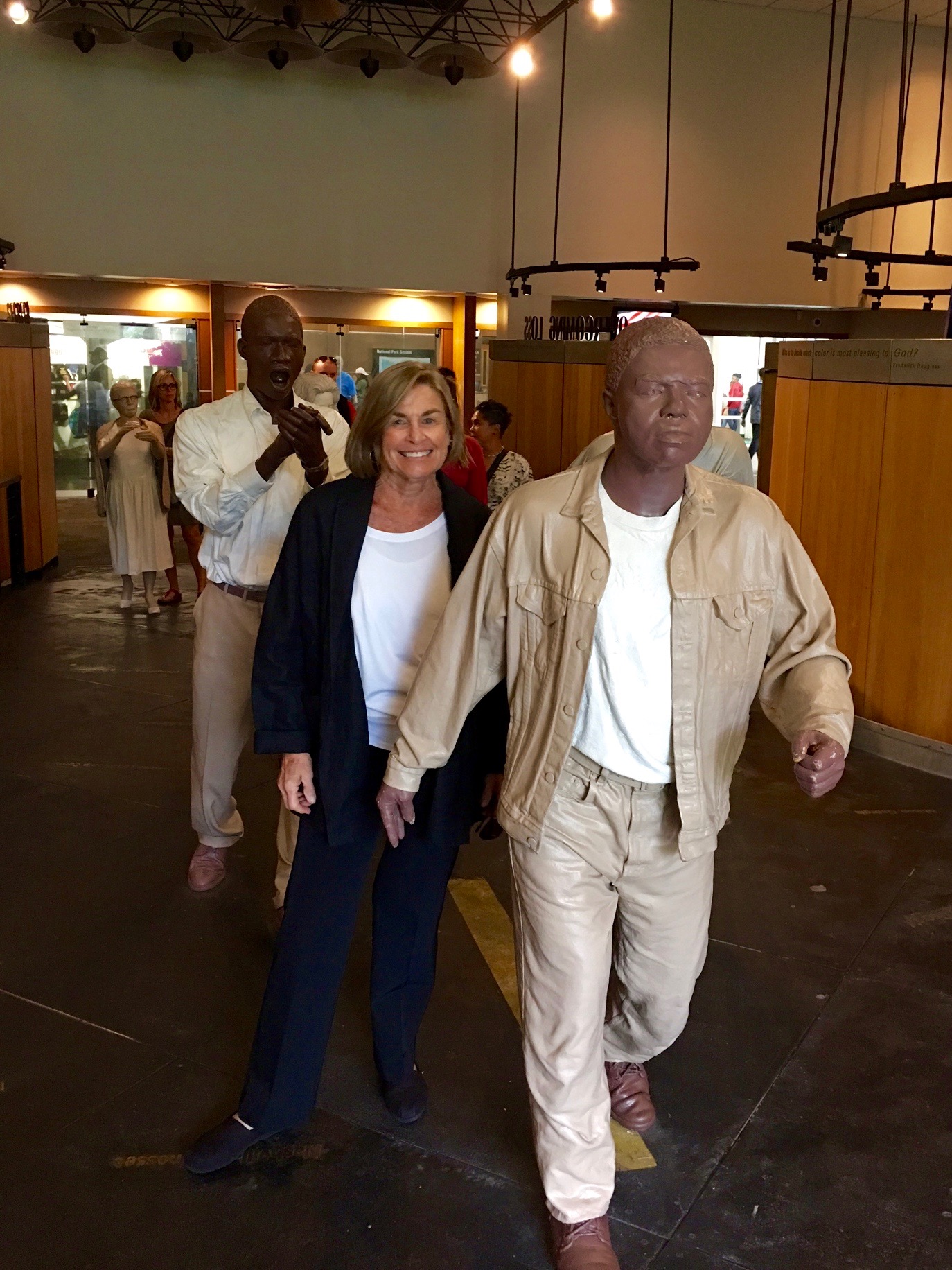 This exhibit commemorated the 5-day, 54-mile march from Selma, Alabama to Montgomery. 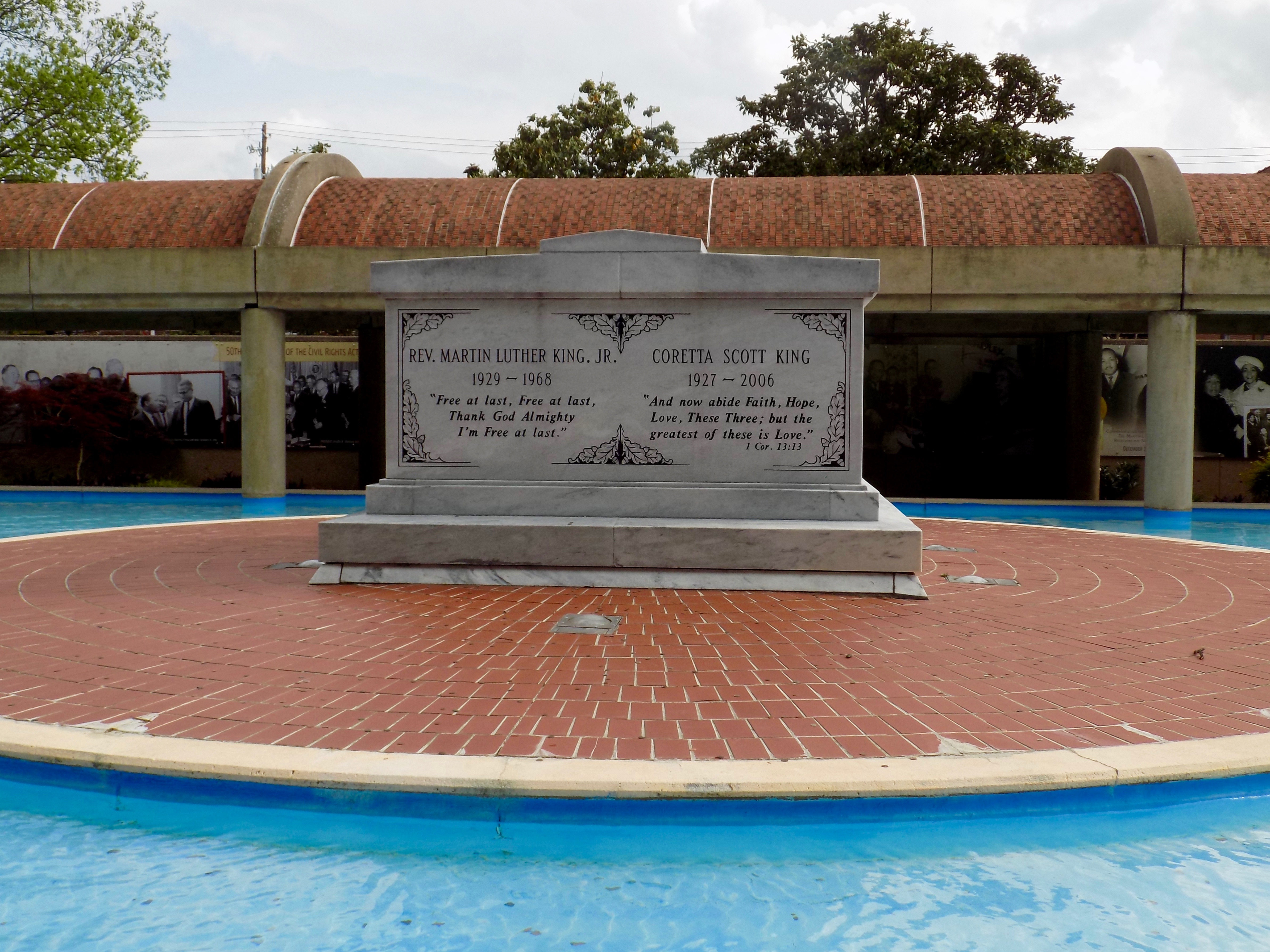 Ever find yourself thinking, “When I have time, I want to read this or go here or do so-and-so.” Those musings usually wander to the back burner and are sometimes never realized. Although Bucket List is not my favorite term, since Jack Nicholson’s and Morgan Freeman’s 2007 film with that title, many of us seem to have one. Bravo for us. 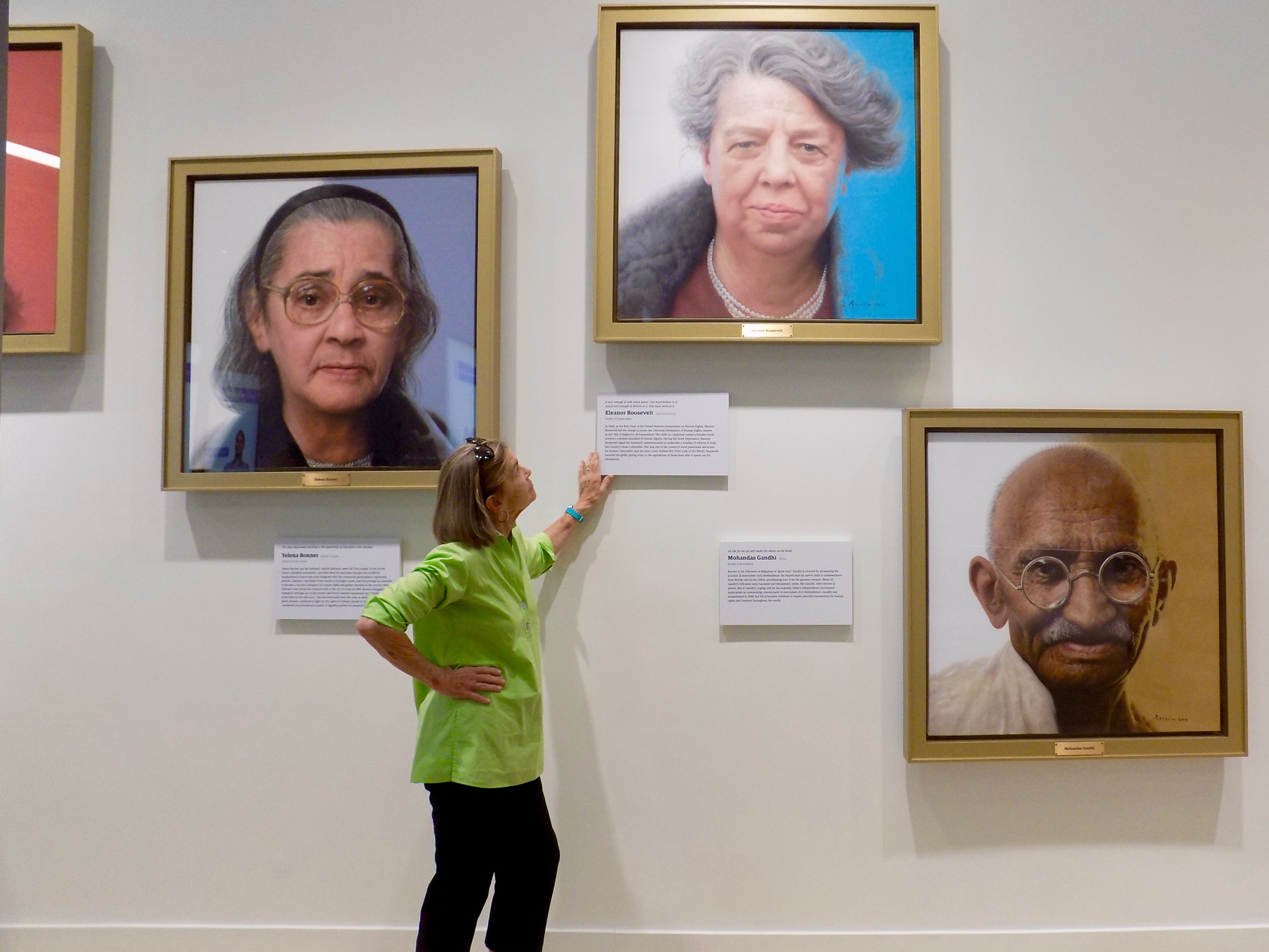 My favorite museum was Atlanta’s new Center for Civil & Human Rights which opened in 2014. First Lady Eleanor Roosevelt is among those honored on the “DEFENDERS” WALL. Opposite this wall is the “OFFENDERS” WALL filled with tyrants and oppressors. This Center very accurately shows the challenges we face today. 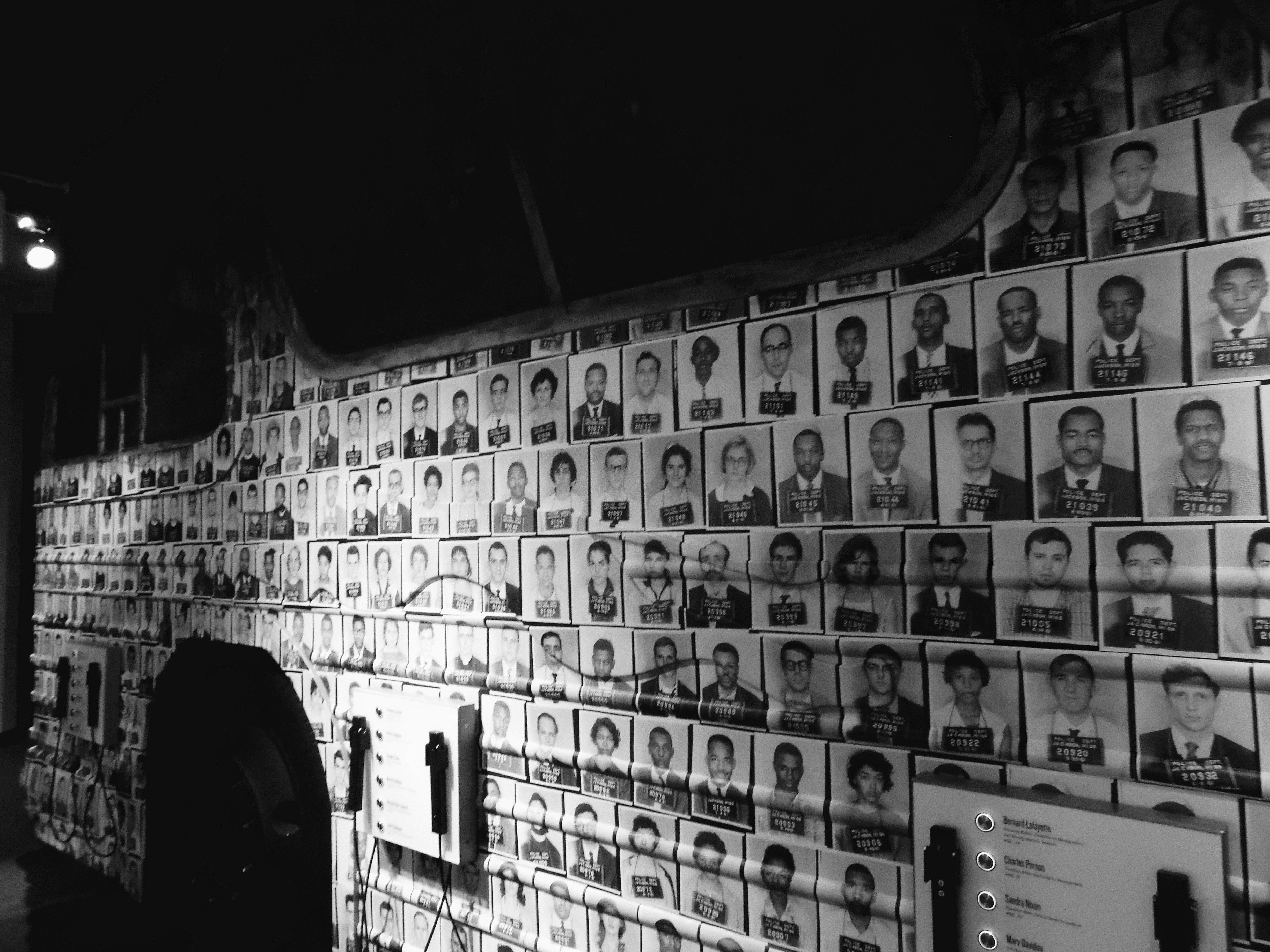 On display at the Center, this bus shows all the Freedom Riders arrested in 1961.

“Those ‘back burner’ thoughts, the ones the brain isn’t quite sure about yet, may cook the slowest yet they often manage to be the tastiest when they come out.” Criss Jami 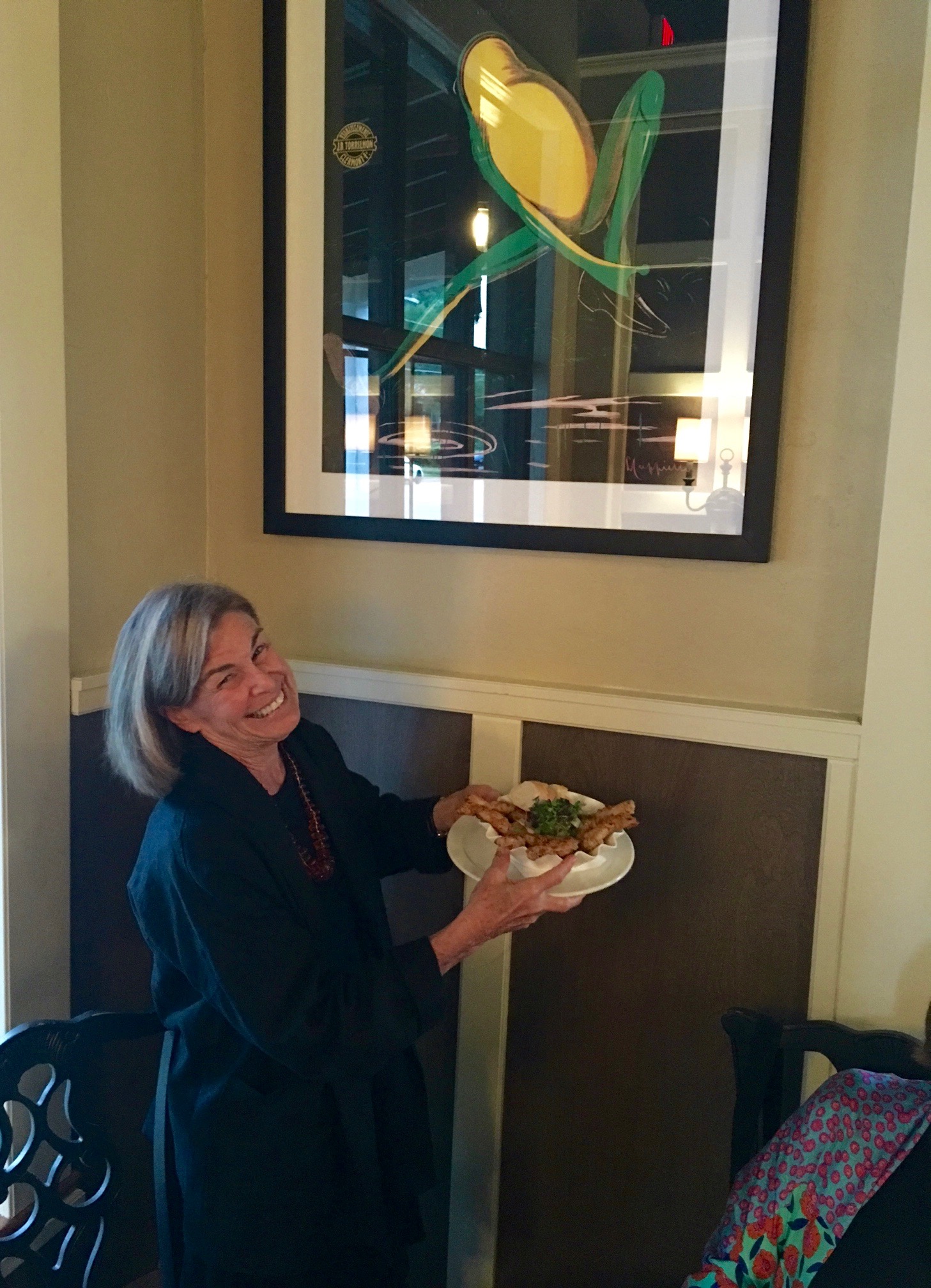 Since I like to eat, Ardyth made reservations at some wonderful restaurants. In Columbus, where her daughter, Cody and son-in-law, Trent. live, we had inside info and our two dinners were memorable. Here, I am having Cuisses de Grenouille while another frog, legs intact, looks on.

Today’s post is about realizing three of my back burners that have percolated to reality:

Last Christmas I discussed with Emma, a high school sophomore, my reading along with her the literature she was assigned in her second-semester English class. I’ve been wanting to re-visit some classics. She was game and that’s why this winter I re-read Hawthorne’s The Scarlet Letter, Night by Elie Wiesel and Unbroken by Laura Hillenbrand. Seeing these three books through the lens of a 15-year old teenager is an exquisite gift. Reading her essays, especially her thoughts about Night, entitled “Silence” will always remain with me and is another bond to be continued despite our 900-mile separation. 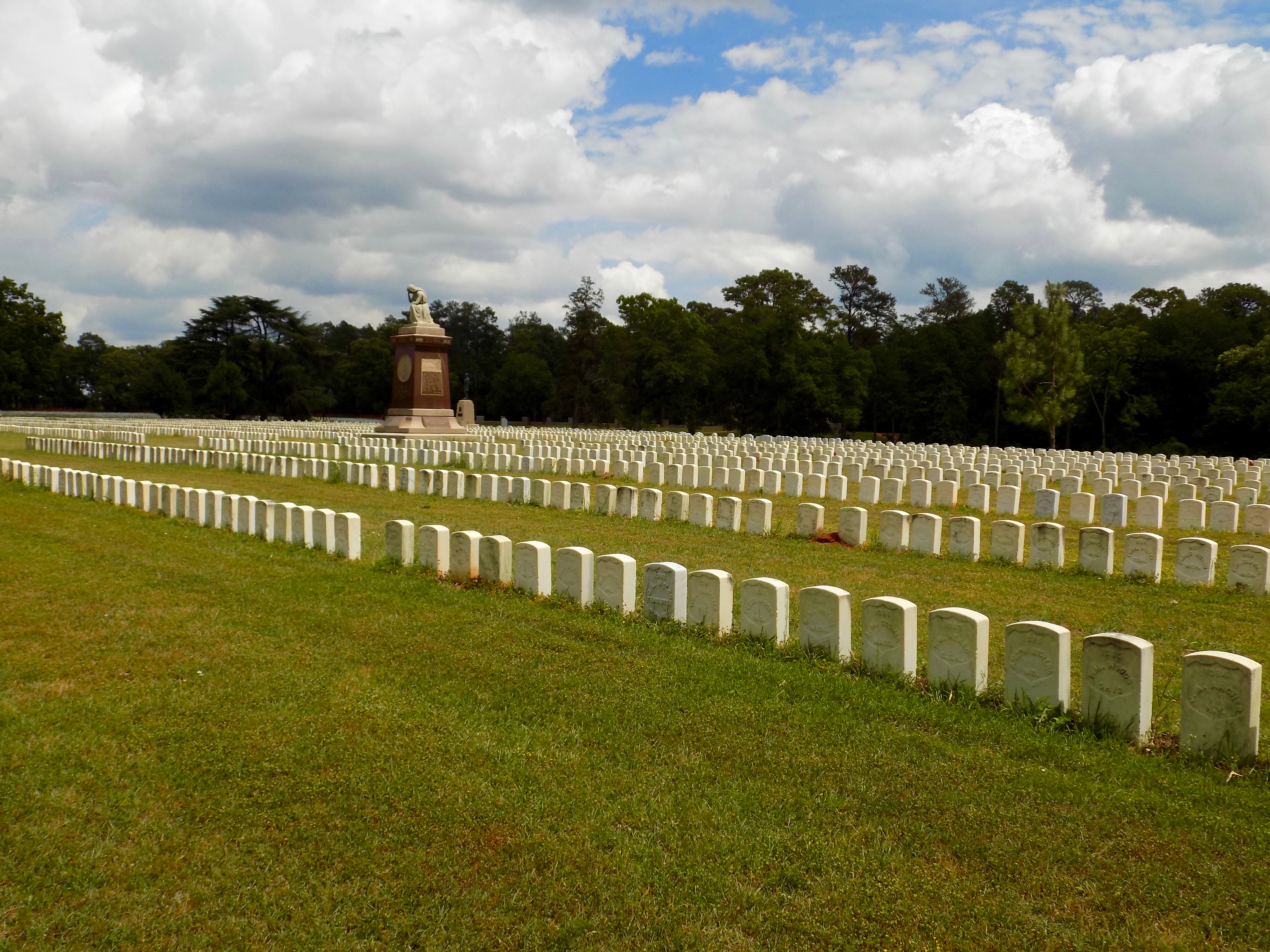 Andersonville National Historic Site: The largest and most famous of 150 military prisons of the Civil War, Camp Sumter, commonly known as Andersonville, was the deadliest landscape of the Civil War. Of the 45,000 Union soldiers imprisoned there, nearly 13,000 died. At its most crowded, it held more than 32,000 men. 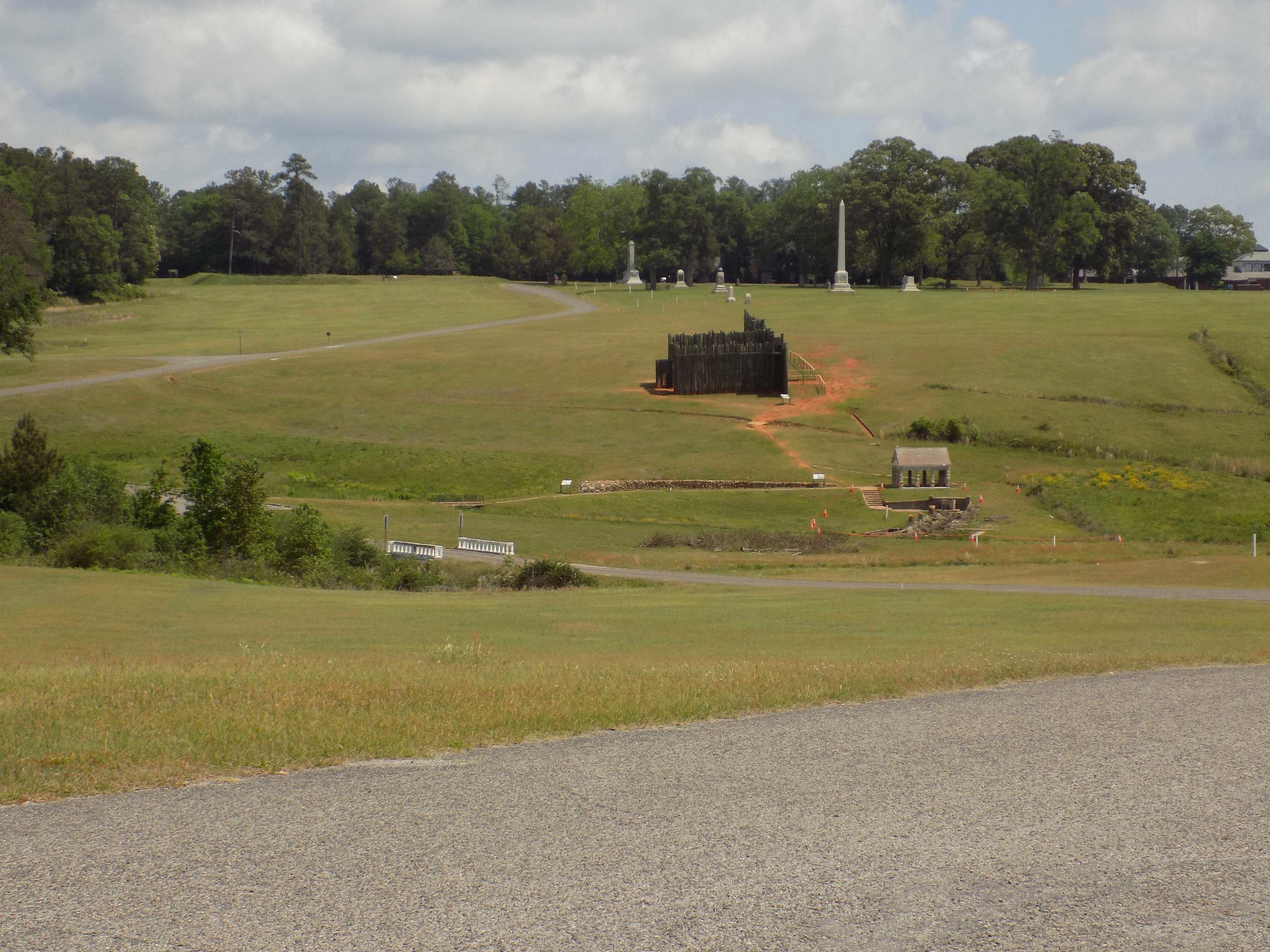 In the early Sixties, while attending summer school at the University of Iowa, I went to nearby West Branch to see the Herbert Hoover Presidential Library, one of four managed by the National Archives & Records Administration. I remember being so enamored I promised myself I would visit all four. Although the number of libraries has grown to thirteen, in 2013 I decided, if not now, when. Many of you readers have shared this adventure with me. Just before returning to Aspen, I flew to Atlanta with my Colorado friend, Ardyth Sohn, to visit Jimmy Carter’s library, my 12th. I’m sharing our week-long adventure through photos in this post. Last stop, Grand Rapids, TBD. 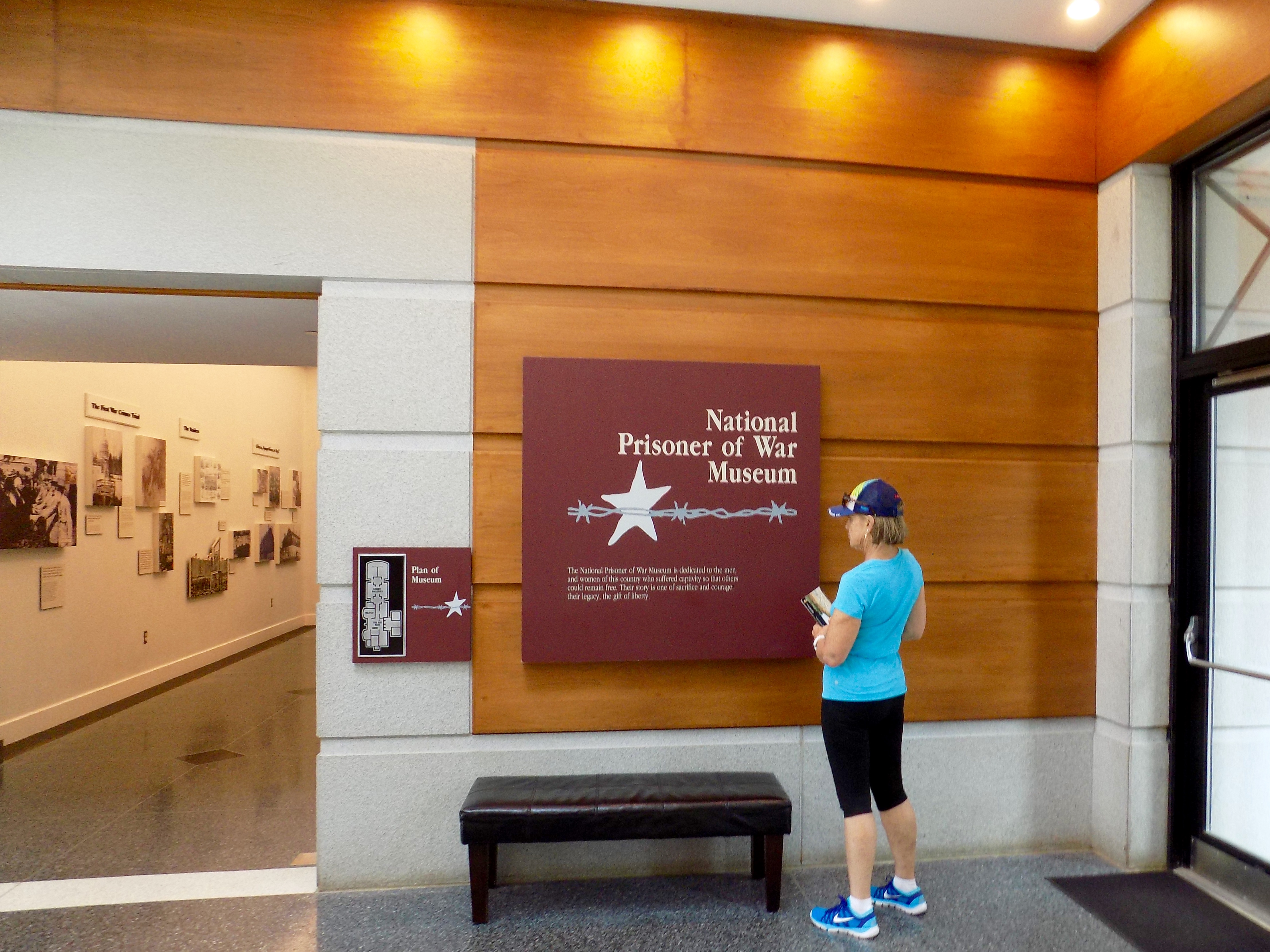 The Prisoner of War Museum at Andersonville is a brutal reminder of how cruel war is.

Ten years ago I flew to Lyon, France, for a week-long seminar on La Résistance. Lyon was a major centre of the French resistance during WW II. Besides this extraordinary learning experience, I also was shocked to realize Lyon, home to renown chefs Paul Bocuse and Daniel Boulud, is underrated as a gastronomical paradise. Quite often Parisians will even grudgingly admit it’s #2 to their #1. Famous for their bouchons, “gut-busting restaurants where food is brought to the tables in big earthenware bowls and rustic terrines,” says David Lebovitz, my favorite meal was Salade Lyonnaise. I promised myself I would return home and re-create this delicious frisée salad with bacon, egg, and garlic toasts. Now, ten years later and merci mille fois to Lebovitz’s My Paris Kitchen cookbook, I am doing just that. 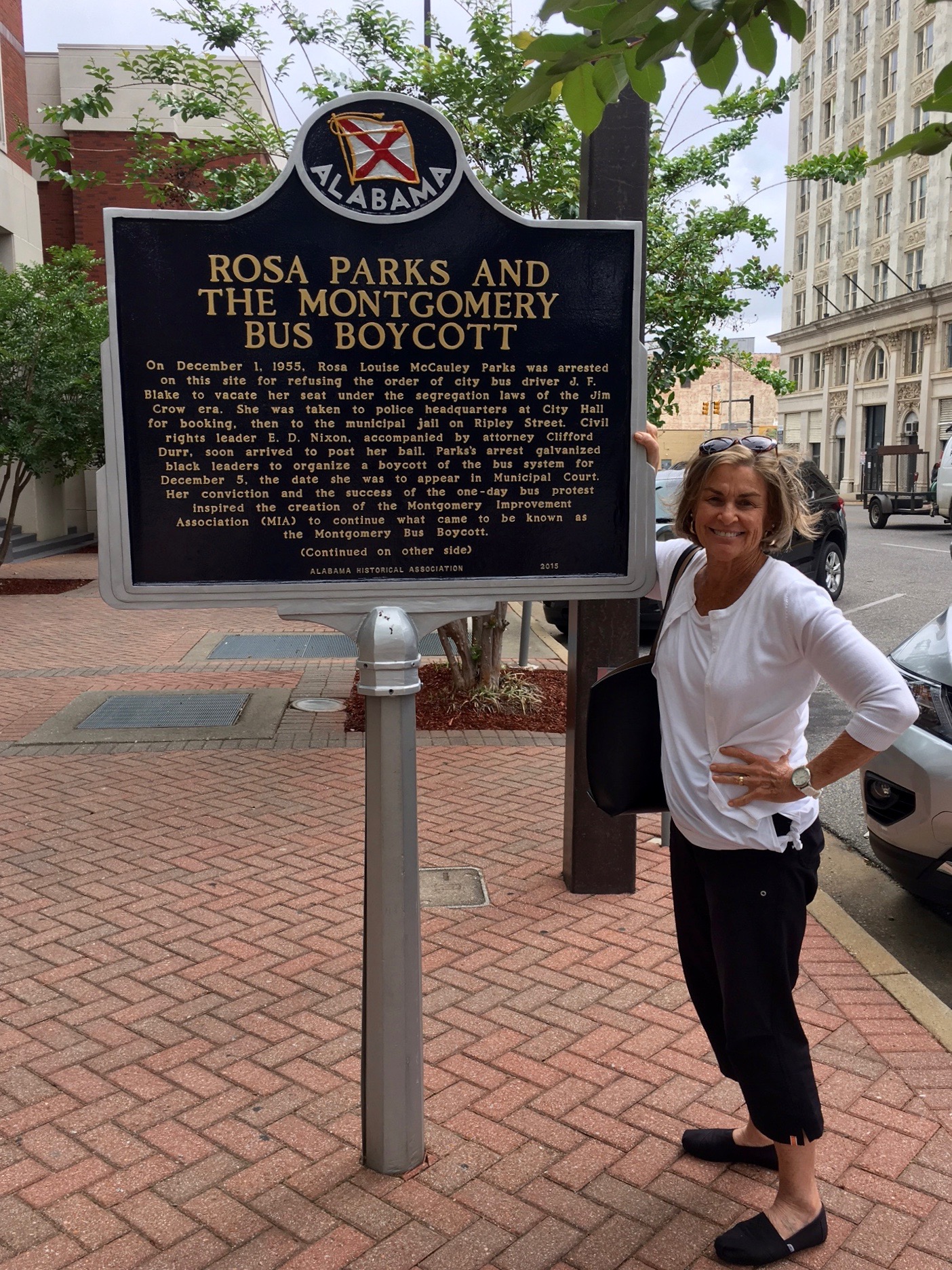 During our return to the Atlanta airport, Ardyth decided I should see Montgomery’s historical sites and the Rosa Parks museum. A detour, to be sure.

We also toured CNN’s Center’s national headquarters in Atlanta, found our way to Margaret Mitchell’s house where she wrote Gone With the Wind and spent a day in Warm Springs at FDR’s Little White House. A busy week. 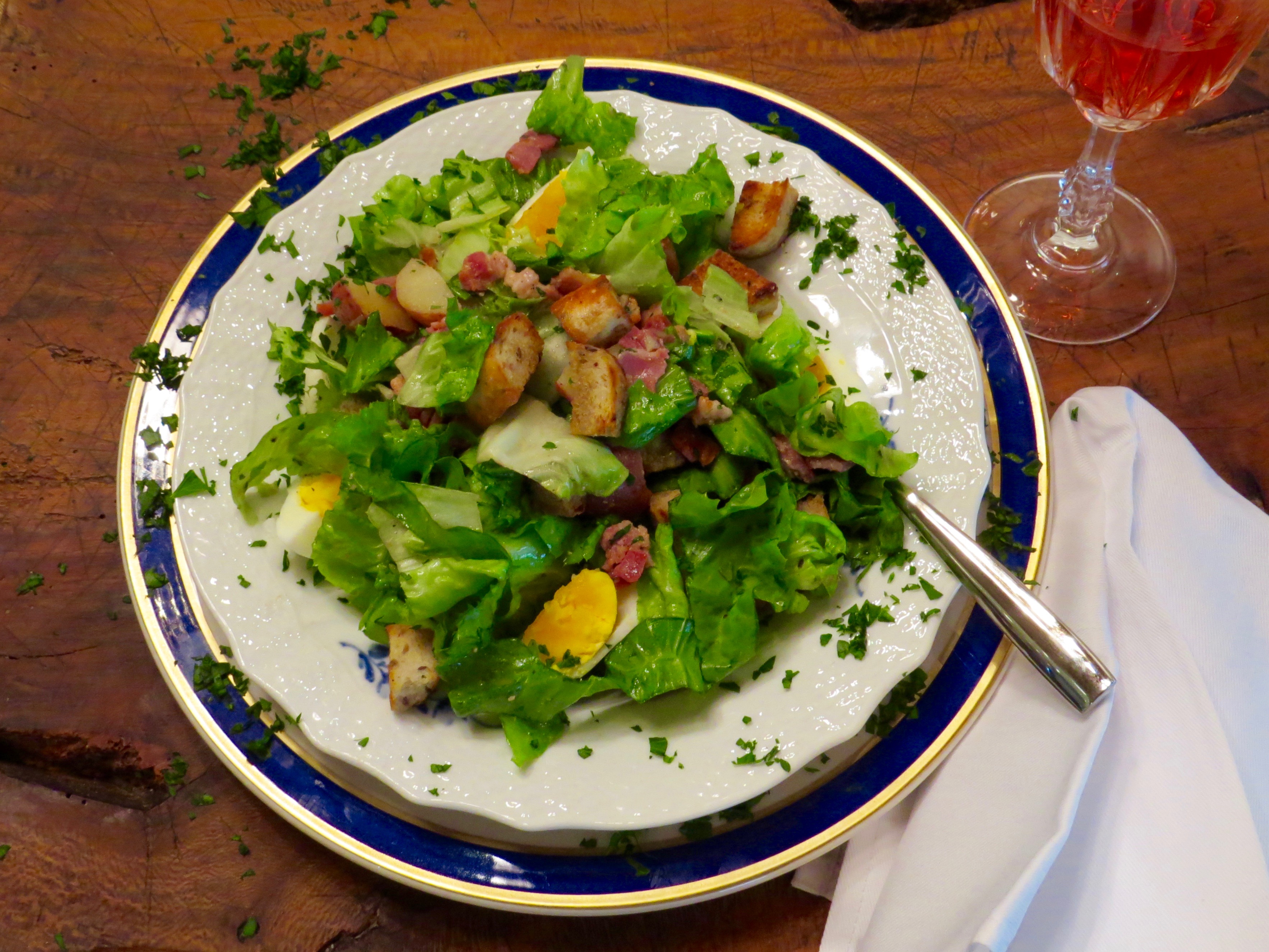 1. To make the croutons, heat the oil in a skillet over medium heat. Add the garlic, and cook until it’s deeply golden brown. Be careful not to burn it. Remove the garlic. Add the bread, stirring the cubes in the oil, turning them frequently. Add a sprinkle of salt and a dribble more oil if necessary, until the bread is brown on all sides, about 5 minutes. Set aside until ready to serve. (NOTE: May be made 1-2 days ahead and kept in tin container.)

2. To make the salad, put the potatoes in a saucepan with enough cold water to cover. Add some salt and bring to a boil over high heat. Decrease the heat to a low boil and cook for 15 minutes, until the potatoes are tender when pierced with a sharp knife. (NOTE: If done in advance, cook them slightly less, and let them rest in the warm water for up to 45 minutes.)

3. While the potatoes are cooking, fry the bacon in a skillet over medium heat until just starting to crisp. Drain the pieces on a plate lined with paper towels.

4. In a large salad bowl, whisk together the vinegar, mustard, 1/4 tsp of salt, the oil, water and garlic. (NOTE: This can be made 1-2 days ahead and kept, refrigerated, in a glass jar.)

5. To assemble the salad, slice the potatoes and add them to the bowl along with the bacon and toss gently. Add the frisée, parsley, and some black pepper. Add the croutons and hard-cooked eggs (if using) and toss very well. Divide among four salad bowls. If using poached eggs, slide one on top of each salad and serve.

Although it’s not traditional, I sometimes add 2 cups of crumbled blue cheese to the salad at the last minute, omitting the eggs.

TIP: If you’d rather not make the salad, still try the croutons or the salad dressing sometime. Both are wonderful. 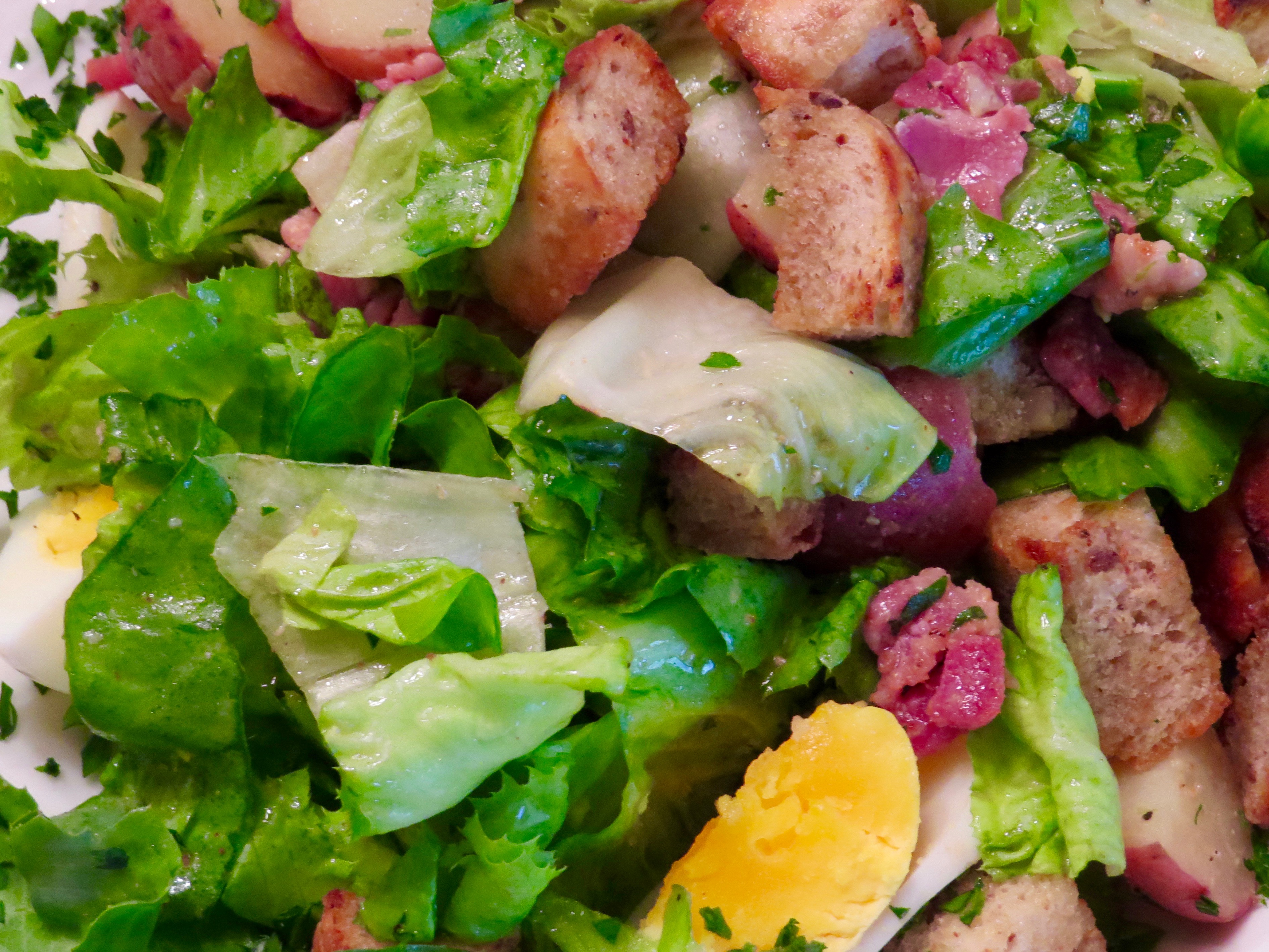 CooktheBookFridays is an international food group cooking its way virtually through David Lebovitz’s My Paris Kitchen cookbook. If you’d like to join or see what my colleagues are making, go here.

« WANT the RAINBOW? WELCOME the RAIN.
THIS ISN’T THE POST I PLANNED… »