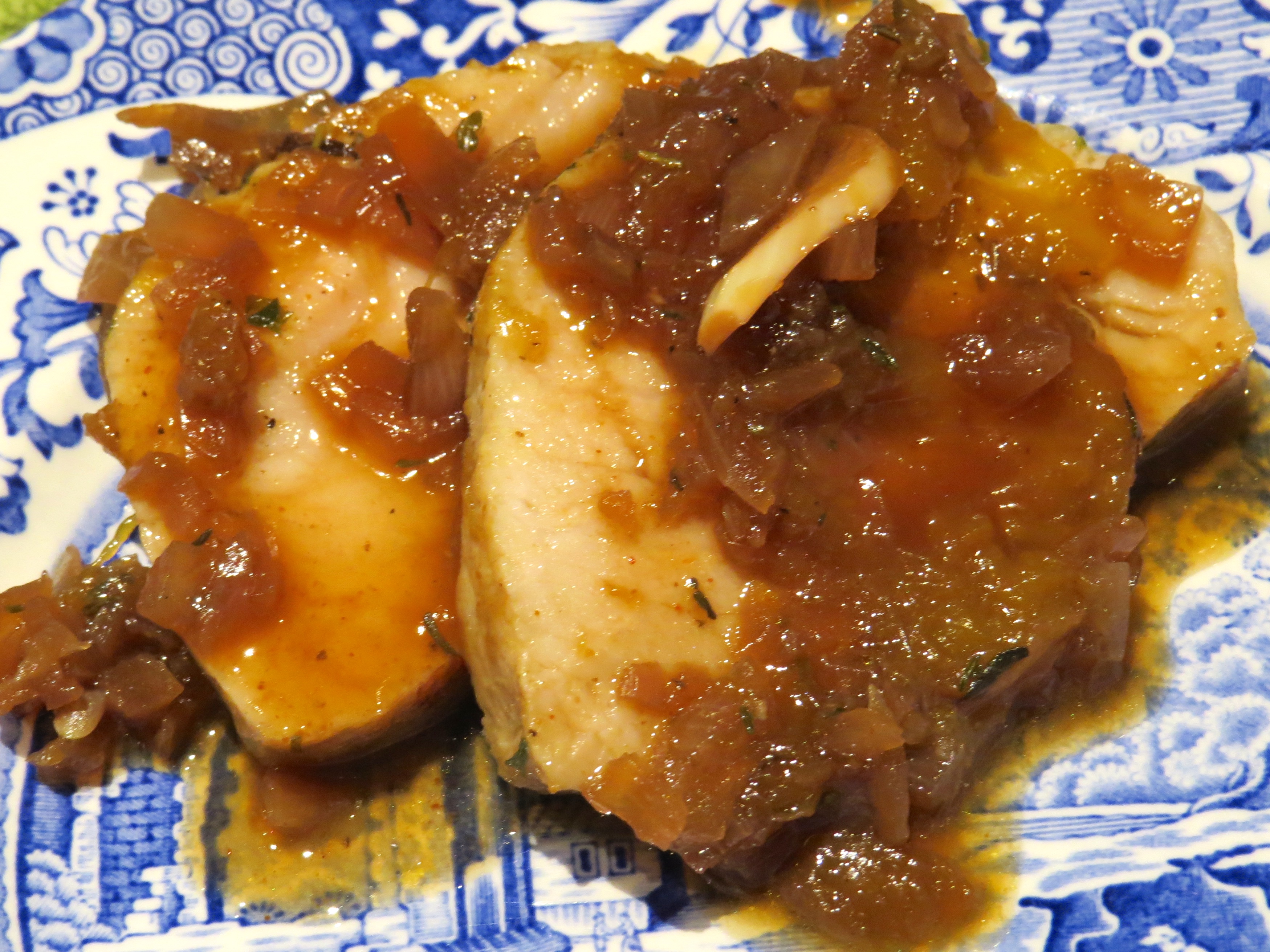 We’re talking pigs again. Last week I alerted you to the possibility that Wilbur, Babe and the Three Little Pigs can fly. Now it gets better. Did you know Piglet of Winnie the Pooh-fame sponsors an annual cookbook contest? I mean, how many Piglets do you know? It just may be that Piglet chooses the 16 most notable cookbooks of the year to face off competitively. This week I’m all about that idea and those 16 books. 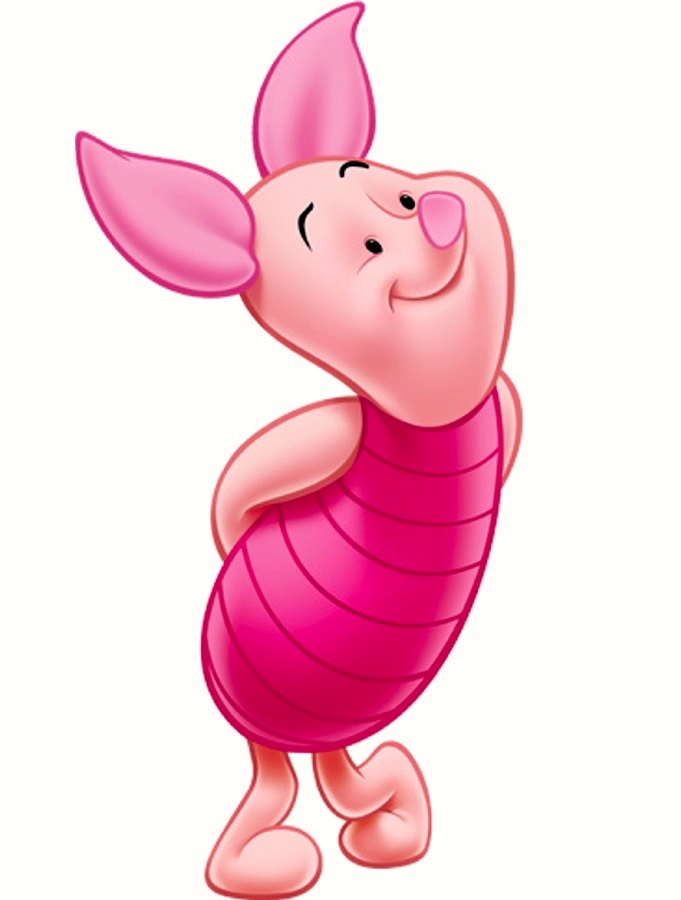 Piglet, Winnie-the-Pooh’s best friend, is a fictional character from A. A. Milne’s books. Reprinted with permission of The Walt Disney Company

After better comes best. Here it is. This week’s French Friday’s with Dorie recipe choice is a delicious Pork Roast with Mangoes & Lychees. About those lychees. Not to be found in Aspen. I substituted with preserved lemons which may be tastier. This roast is a crowd pleaser, simply made and easily served. 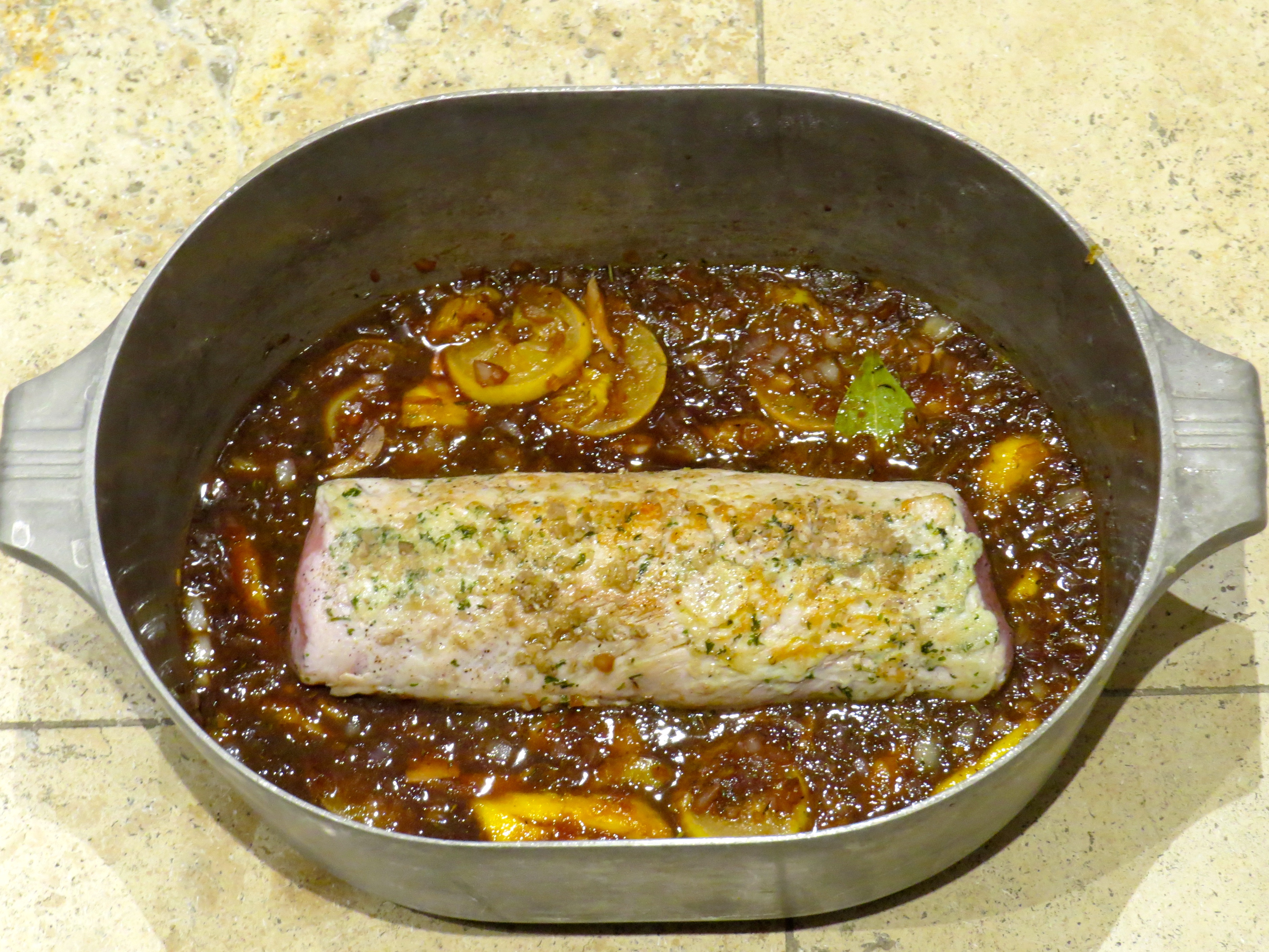 The pork and added ingredients are ready to go into the oven for its final braise.

For my roast I bought a Hormel® Always Tender® Lemon Garlic Pork Tenderloin. Never fails me. I made this dish with no changes except the preserved lemons, thinly sliced. Use your meat thermometer because 140 degrees is the max for a moist, flavorful result. For dinner I added a baked sweet potato and Red Cabbage, Parsnip, Orange, Date Salad (later post). See the pork recipe below. 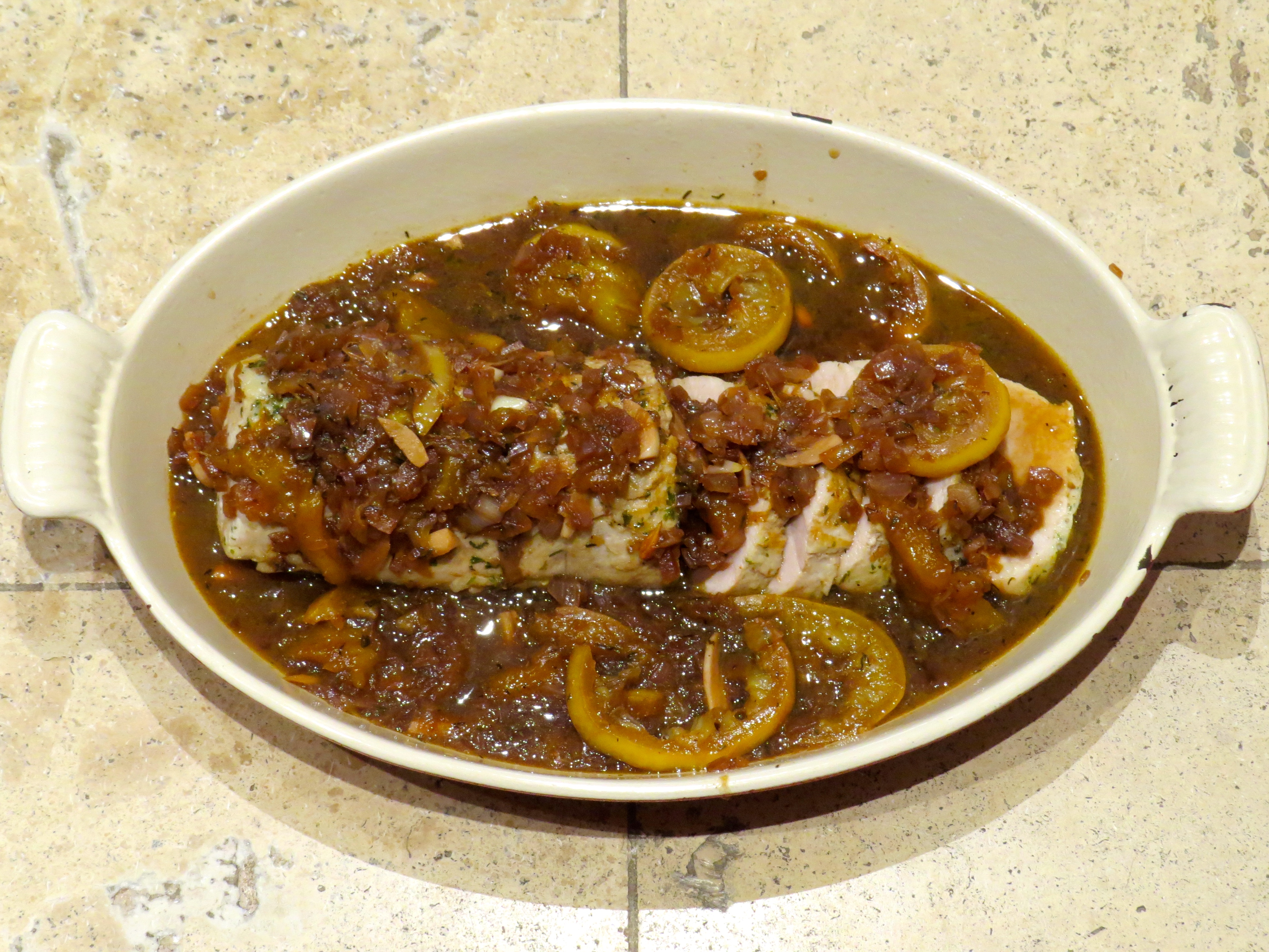 This week’s French Frieay’s recipe is ready to be served.

Most of you don’t realize on Friday, May 22, we Doristas (the affectionate name for our gang), will be cooking our last recipe from “Around My French Table, more than 300 recipes from my home to yours.” We began in October 2010 with Gougères. I was late to the party, joining in February 2011. 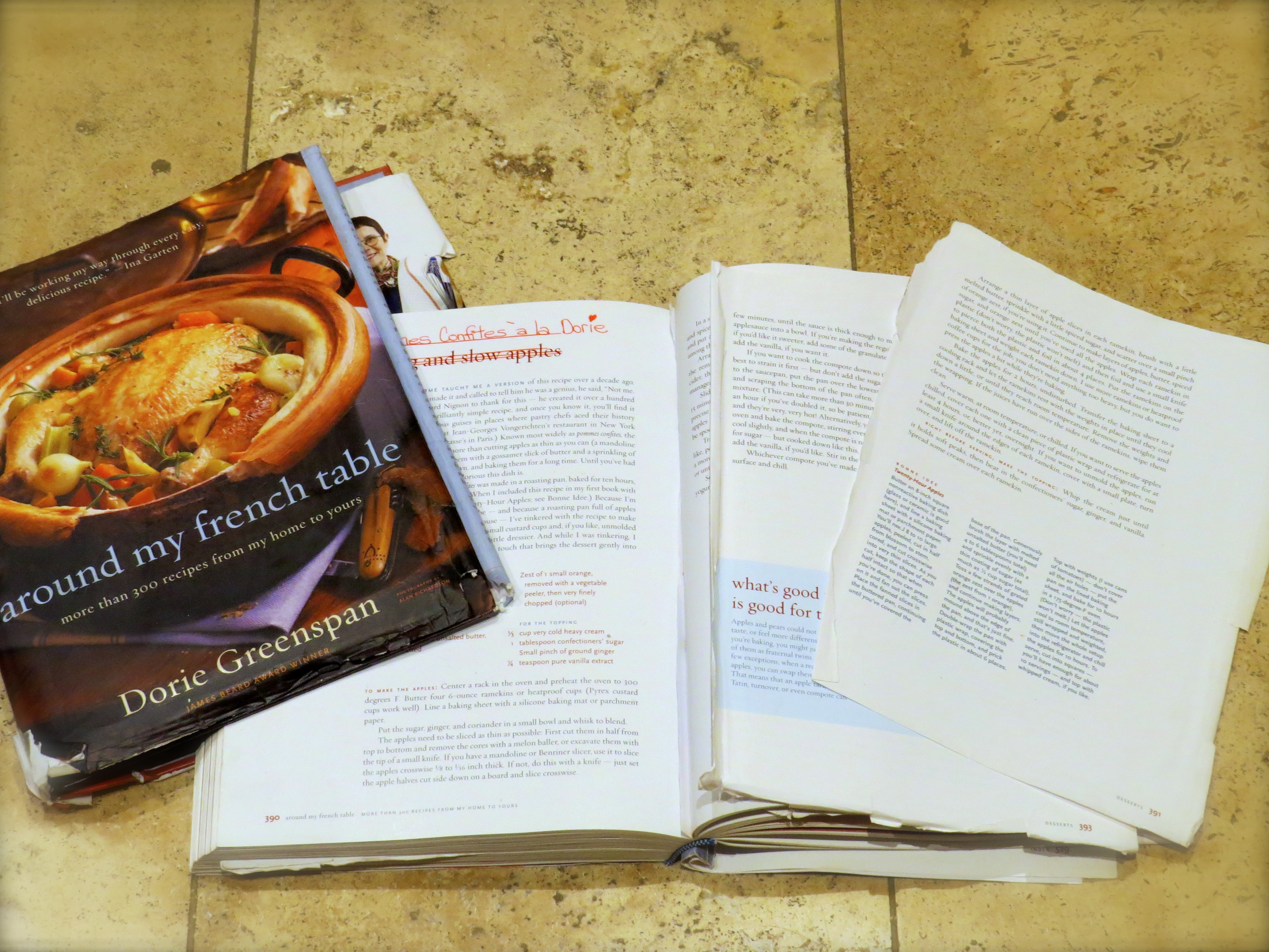 My “Around My French Table” cookbook.

I won’t belabor our French Fridays journey now. But before we begin discussing 16 new cookbooks I want you to see a veteran. My AMFT cookbook has lived in California, Arizona, Nevada and Colorado. If I’m traveling for more than one Friday, it’s joined me. If pages are torn from the book, it’s a good bet I traveled by air. The binding and contents parted company 37 recipes ago. Call it taped, stained, greasy, ripped and all mine.

In February of every year Food52, an online food blog ‘committed to helping people become better, smarter, happier cooks,’ sponsors The Piglet Tournament of Cookbooks. During a three week period the year’s 16 most notable cookbooks (in the opinion of Winnie-the-Pooh and Piglet OR the Food52 staff) face off. No categories. No classifications. No groupings. Toss them together and, like cream, see what rises to the top. 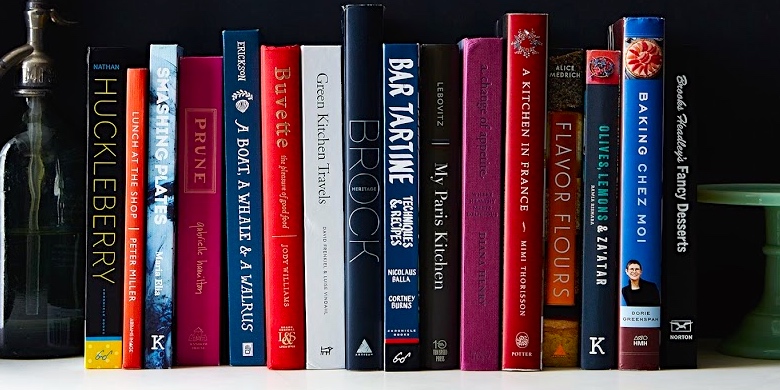 The sixteen cookbooks chosen to compete in The 2015 Piglet Tournament of Cookbooks. Food52 Photo.

The competition is bracketed. Each face-off is individually evaluated by a judge, primarily food professionals. To my mind NPR’s host of All Things Considered, Melissa Block, and food writers Kate Christensen and Rosie Schaap were the crème-de-la-crème in this arena. The judges are apparently restricted by no criteria so creativity and sometimes, craziness reigns. Food blogger Adam Roberts’ critique (my personal opinion and, others, incidentally) was in poor taste and not amusing. Belittling someone? Uh, no. Take a look. 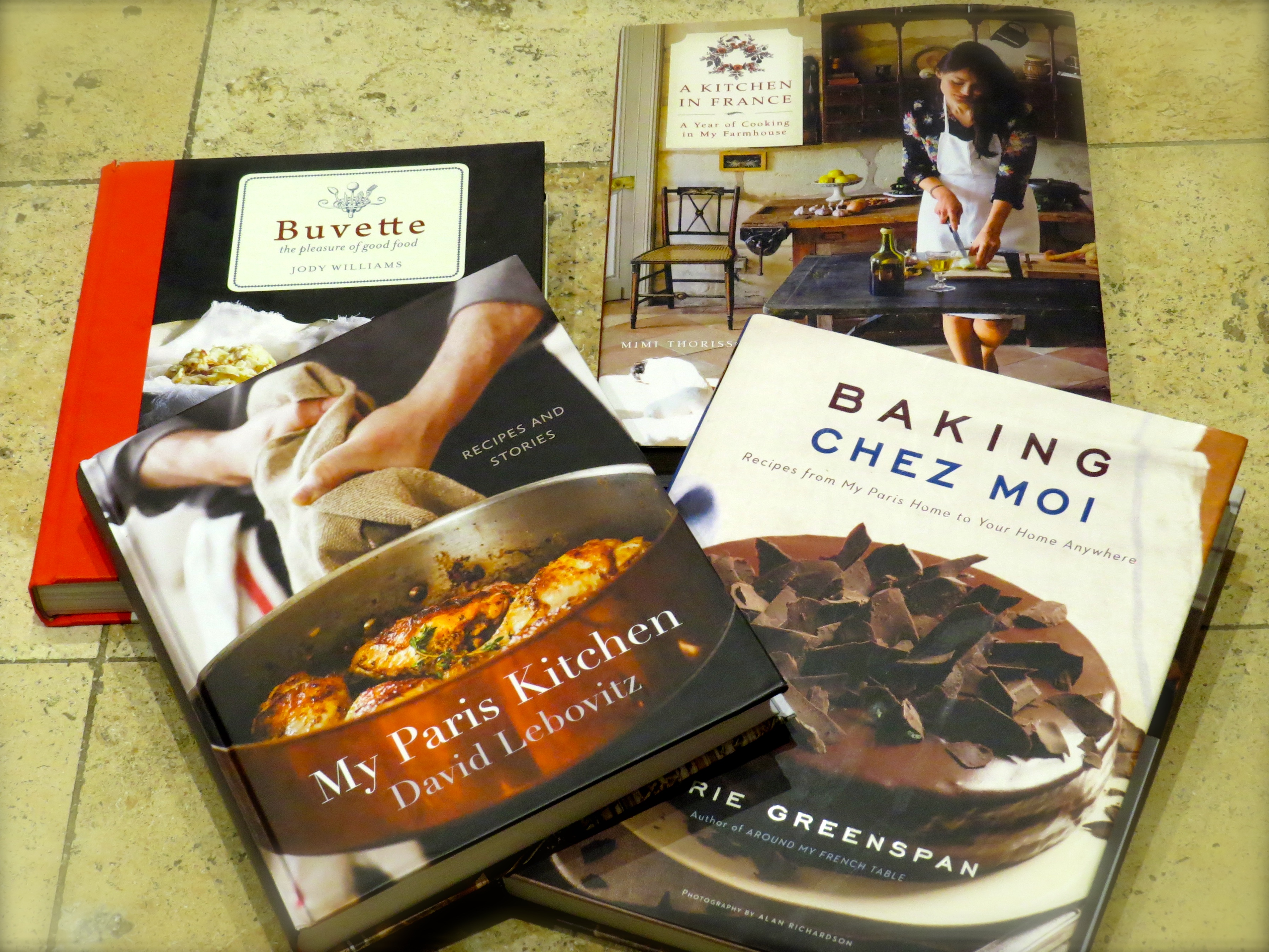 Of the 16 chosen 2015 cookbooks, I had recently purchased 4 but was not even aware of the others. That’s why I love this competition.

Of the 16 nominated cookbooks, I already owned four but was clueless about the others. The beauty of this quirky February Madness was meeting 12 other well-regarded cookbooks (an Amazon moment, perhaps). The judge’s evaluations, whether thumbs up or down, are a feast in words.

In the finals, it was David Lebovitz’s My Paris Kitchen versus Brooks Headley’s Fancy Dessert. If you recall, I just cooked David’s cover recipe, Poulet À La Moutarde, and have already bookmarked 15 more recipes. It lost. Hey, David, in the words of Joe Jacobs, We wuz robbed. 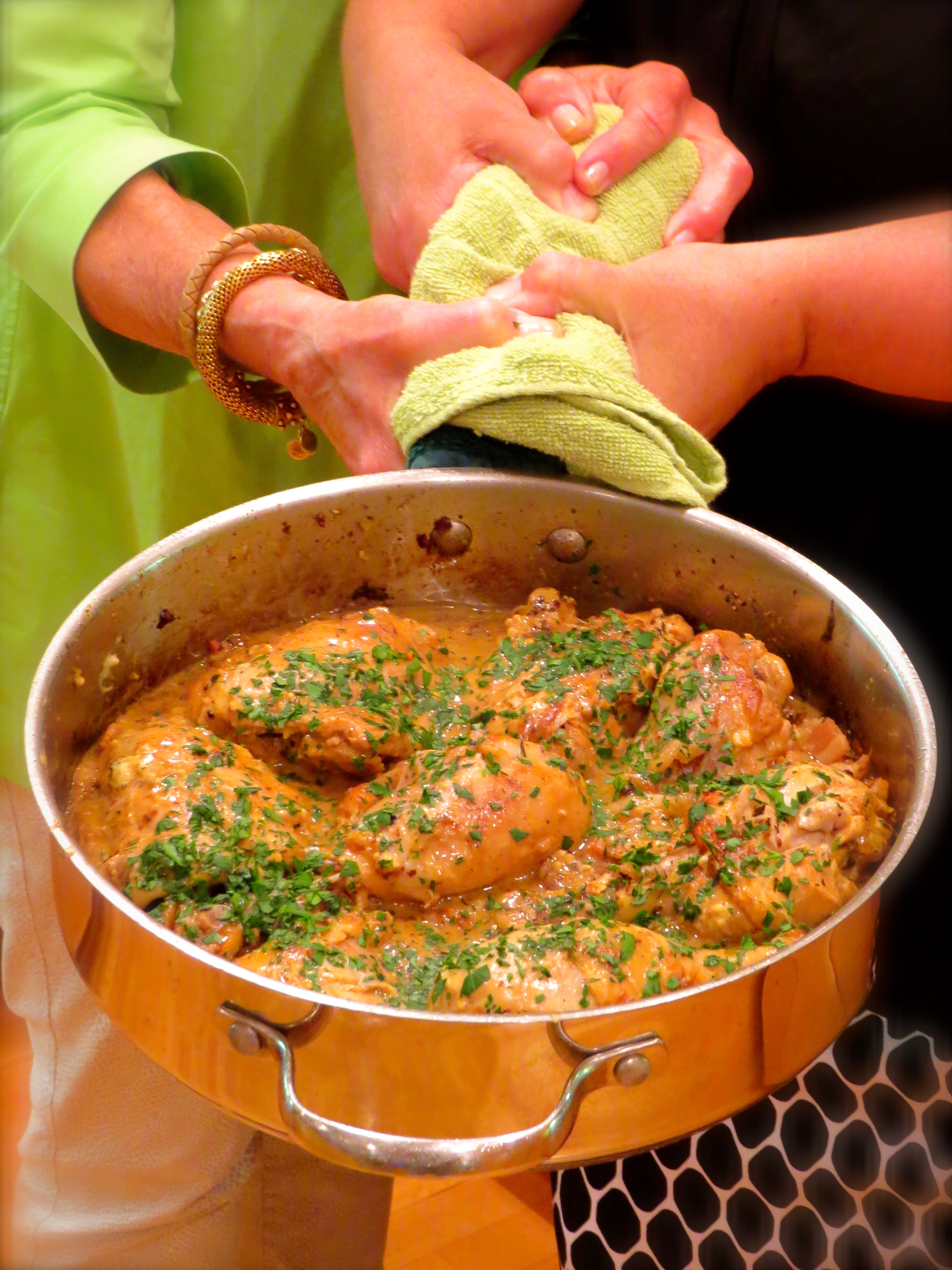 1. Center a rack in the oven and preheat the oven to 300 degrees F.
2. Pat the roast dry with paper towels. Place a Dutch oven or other heavy oven-going casserole over medium-high heat and pour in 1 tablespoon of the oil. When it’s hot, put the pork fat side down in the pot and cook for a couple of minutes, until the fat is browned, then turn it over and brown the other side. Transfer the roast to a plate, season with salt and pepper, and discard the oil.
3. Return the pot to the stove, this time over low heat, and add the remaining tablespoon of oil. When it’s warm, toss in the onion and garlic, season with salt and pepper, and cook, stirring, for about 3 minutes, or until the onion is translucent. Turn up the heat and pour in the vinegar — stand back, the scent of hot vinegar is very strong. When the vinegar has almost evaporated, a matter of a minute or two, pour in the wine. Let the wine bubble for 30 seconds or so, then add the soy, lime juice, and honey. Bring to a boil, stir in the piment d’Espelette or chili powder, add the bay leaf, thyme, mango, and lychees, and give the pot another minute at the boil.
4. Add the roast fat side up, baste with the sauce, cover the casserole, and slide it into the oven. Allow the roast to braise gently for 30 minutes, then check its temperature: you’re looking for it to measure 140 degrees F at its center on an instant-read thermometer. The roast is likely to need a total of 40 to 50 minutes in the oven, but it’s important to check early, since pork varies.
5. Pull the pot from the oven, transfer the roast to a cutting board, cover it lightly with a foil tent, and let it rest for 5 to 10 minutes, during which time it will continue to cook (its temperature will probably rise another 5 degrees or so).
6. While the roast is resting, taste the sauce. If you’d like to concentrate the flavors even more, boil it for a couple of minutes. Don’t forget to check for salt and pepper.
7. Slice the roast, which makes 6 to 8 ample servings, and add the sauce.

French Fridays is an international group of bloggers cooking their way through Around my French Table. Thanks, Cher, The not so exciting adventures of a dabbler…, for introducing me to The Piglet three years ago.